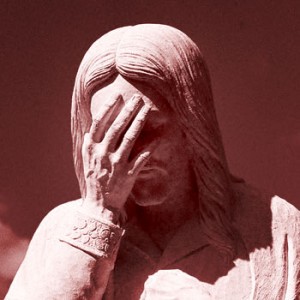 Nothing characterizes P-B so much as illusion, in the old story things are not what they seem. We will see that this is true of one of the central institutions of that paradigm, namely, Christianity. Tom Harpur reveals one key aspect of the illusion that is Christianity. “Long before the advent of Jesus Christ, the Egyptians and other peoples believed in the coming of a messiah, a virgin birth, a Madonna and her child, and the incarnation of the spirit in flesh. While the early Christian church accepted these ancient truths as the very basis of Christianity, it disavowed their origins. What had begun as a universal belief system built on myth and allegory was transformed, by the third and fourth centuries A.D., into a ritualistic institution based on a literal interpretation of myths and symbols … To take the Gospels literally as history or biography is to utterly miss their inner spiritual meaning.”  Almost from the beginning Christianity has been based on such ignorance, immersed in the unsustainable context of P-B.

“As the scholars of the controversial California-based Jesus Seminar [founded in 1985 by Robert Funk] have pointed out, some twenty gospels of various kinds have come down to us either in whole or in pieces from the first three centuries of the common era, but only four ended up included in the New Testament … much of the Sermon on the Mount, comes from a common store of ancient wisdom literature that was widely circulated in the Middle East and eventually found its way into Jewish Talmudic and Midrashic (imaginative) commentaries … Many of them [the Gospel stories] were pre-existent, pre-historic, and therefore pre-Christian. They were collections of Egyptian, Hebrew, and Gnostic sayings, and therefore cannot stand on their own as evidence that the Jesus of the Gospels ever lived as a man or teacher. These sayings were all oral teachings in the ancient Mysteries ages before they were written down.”

All religions are institutions created within a P-B context, and are mythical narratives that are themselves barriers to a paradigm shift. Without a P-A worldview, the wisdom inherent in profound metaphorical stories cannot be experienced.  Joseph Campbell revealed the sad truth that “The tragedy of Christian history is [it’s] consistent failure to draw the life from the Christian myth and unlock its wisdom.”

Speaking of the beginning of Christianity, Thomas Sheehan says, “… when we search for the origins of Christianity we find not an event that happened to Jesus after he died (‘resurrection’), or supernatural actions he allegedly performed (‘appearances’), but only apocalyptic interpretations of an experience that Simon and others claimed to have had.”  Legends or tales told by human beings, as we all know, bear little resemblance to fact and certainly not to reality. As Sheehan points out in the case of Christianity, “That legend eventually became the ‘thing itself’ … Jesus’ message, which had started as an invitation to live God’s future in the present [P-A], devolved into a dogma about what had happened in the past [P-B].”

The essence of Jesus’ message was about the good news (gospel) relating to awareness of the present moment and the perfection of creation (in religious language, “the father’s presence”). Unable to internalize this eternal truth because they couldn’t fit it into the P-B narrative it “devolved into one more form of religion … Christianity [which] lost the core of the prophet’s message … that the future was already present—grace was everywhere …”

A more profound understanding of Christianity, from the perspective of P-A, reveals a number of compelling ideas that what would be, to many Christians, surprising revelations. For example, as Peter Russell discovered when studying translations of early Christian text from Greek to other languages: “Parallel ideas can be found in Christianity. The admonition ‘Sinners repent, for the kingdom of Heaven is at hand’ is often interpreted as telling us to be sorry for what we have done, because the day of judgment is coming. But if we look back to the Greek texts, we find another possible interpretation.”

“The Greek word that we translate as ‘sin’ in amortano. This, as Maurice Nichol has pointed out in his book The Mark, is a term derived from archery and means to have missed the mark, to have missed the target. The target we are each seeking is inner fulfillment, but, imagining that it will come from what we have or do, we aim in the wrong direction, and thus ‘miss the mark.’ It is this fundamental error as to how to find happiness and peace of mind that is our ‘original sin.’ The word translated as ‘repent’ is metanoia, which means a transformation of mind. So ‘Sinners repent’ can also be translated as ‘You who have missed your target, and not found happiness in the world around you, change your thinking,’ for what you are looking for lies very close by, within you.”

The scholar specializing in Gnostic Christian texts, Elaine Pagels, contends that salvation defined as accepting Jesus Christ as the savior was not a part of early Christianity. “Irenaeus, a second-century bishop … and his successors … defined Christians as those who accepted a creed. At its heart that creed contained a simple formula: you must accept that Jesus Christ is the son of God and he is the only way to salvation … But passages in Thomas’ gospel draw a quite different conclusion: that the divine light Jesus embodied is shared by humanity, since we are all made ‘in the image of God,’ which is hidden within everyone, although most people remain unaware of its presence.”

Intuitive insights found in depth psychology will enable us to transcend mere literal intellectual understanding concerning the meaning of metaphors and myths in Christianity. “It is a scientific fact that man has a biological birth through a woman of flesh and blood,” says Jung, “but a spiritual or psychological birth through a feminine self within. Man’s biological birth provides him with the base material for creating something unique and individual of himself. This act of individual creation and re-creation within is done through the feminine fathered within by his own male spirit. This is the contemporary meaning of the Immaculate Conception which troubled the literal spirit of post-Renaissance man so much, because he insisted on reading it physically instead of symbolically.”

Jung has helped us understand the Immaculate Conception more deeply, how about the Resurrection? “Resurrection represents the ancient myth of the hero who conquers death and restores life; it represents the projection of an indirect realization of the self that had appeared in the figure of Jesus of Nazareth. The image of the God/man lives in everyone and is incarnated (projected) in Jesus so that people can realize him as their own self and confirm the fact that their psychic reality is not bound by time and space. The Christian church is criticized for understanding spiritual existence only as a body and a physical event, and it is suggested that this anachronism cannot long survive.” Indeed, as we know, the entire paradigm is a sinking ship.