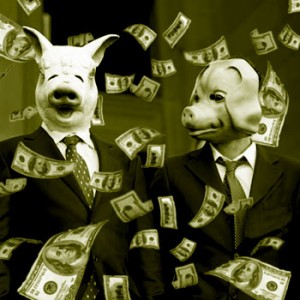 In George Orwell’s Animal Farm (1945), the smartest animals on the farm, the pigs, took over and moved into the farmhouse after the humans were driven off in a “Communist Revolution.” In explaining their special status and privileges to the other animals in the newly created and supposedly society of equality, they said that, “all animals are equal, but some are more equal than others.” Do we in America today have our pigs? Perish the thought, Oink Oink!

Columnist Frank Bruni is not sure about having American pigs but he has observed some interesting changes in American society. “In a country of rising income inequality and an economy that’s moved from manufacturing to services, one thing we definitely make in abundance is distinctions.”

Is our American society getting sicker or healthier and what distinguishes a healthy from an unhealthy human community? What held the Roman Empire together for so long? The same thing that holds American society together, namely fear.

For example, the balance of power between the conservative Tea Party Republicans and the liberal Democrats derives its energy from the fear that the other party will destroy the “story” from which they each derive their identity. Ironically they are virtually identical in their false-self “piggish” behaviors. A clueless porker is a clueless porker whether it’s a Duroc or an American Yorkshire.

Thankfully, we don’t have a Roman top-heavy caste system with slaves at the bottom. Or do we? How many of us in the 99 % are beginning to feel like “untouchables,” like failures, disrespected, conned (cheated), and just plain “pissed off.” In the empires and nations of the past when the inequality become too oppressive, the “downtrodden” raised their own armies and overthrew, usually with great violence, the nobles or ruling oligarchy.

Could we have a violent uprising in America? What does the 1% really think of the 99%? People will often behave the way they are treated, a kind of self-fulfillment of dictated identity. The function of the proletariat, the lowest class of Roman citizen, whose main function was to produce children, could not own property. The pleb was not a citizen and was at the bottom of the Roman caste system just above the slaves. They were people thought of as crude, vulgar and coarse. Let’s examine the evidence (it’s easy to uncover if we just take the time to look) of what the elites (pigs) think of us cows, sheep and goats.

Do the rich like to parade their wealth, “lord-it” over the rest of us? Most definitely, said sociologist Thorstein Veblen in 1899 and he called that behavior “conspicuous consumption.” Today we could call it the “parading pigs.” That’s not nice but it feels good.

Today’s version (2013) of Veblen’s leisure class is the top 1% making more than $394,000 annually. To break into the top 10% we would have to bring home between $114,000 and $394,000. But to be fair, the rest of us do our best to do the same “parading”, emulating the rich to the best of our ability. “Of course, when it comes to luxuries that can’t be faked, the top 1 percent are fervent spenders. Compared with the rest of the top 10 percent, they spend twice as much on college tuitions, three times as much on private elementary and high school tuitions and three times as much on tutoring to get their children into elite institutions. They spend almost four times more on political and charitable contributions.”

Surely, we are all equal at Disney World or the Six Flaggs amusement park in Los Angeles. Sorry, that was yesterday! Today there are many distinctions. The 1% and the 99% definitely do not stand in the same lines or stay in the same accommodations. Did you buy a regular admission ticket or the gold or platinum? The pigs are waving their platinum cards and going to the front of the line and they can ride twice in a row without the terrible inconvenience of getting off and walking to the front of the line.

Of course, the corpulent pigs need that extra few inches in first class on the plane and shouldn’t have to wait in line or struggle with cramming their “carry-on” into the overhead bins. They deserve their special privileges for their “oversize” contribution in creating American “exceptionalism,” don’t they?

Remember the time when we all used to rub shoulders with the privileged porkers in hailing a cab. Not anymore. They call the Uber car service on their cell phone and specify when their S.U.V. or limo is to arrive and the rest of us stand in awe in the rain mumbling *#!(^.  Whoops we can’t print that here!

Take me out to the ballgame. Surely, we are all still eating hot dogs, popcorn and Cracker Jacks and rubbing shoulders in the egalitarian stands. Alas, even the experience of “the old ball game” has radically changed for the “some” that are more equal than the rest of us. “Luxury boxes now take up more space in stadiums than ever; elsewhere in some ballparks, the differences between sections involve not just better views but finer food and a more solicitous staff.”

A continued look at our institutions will tell us which direction we have chosen and that choice up to this point has been made unconsciously. Frank Bruni reminisces about his education. “When I grew up, school essentially came in two sizes: public or private. Now, private is a starting point, with many costly but broadly employed add-on’s: the tutor for specific subjects; the tutor for SATs; the individual sports coach; the college-admissions consultant, whose fee can exceed $5,000.”

Many of us remember an American system of education when any hard-working aspirant could get a college education without graduating with a depressing debt-load. It is not too late to change the direction of American society and we have the example of what is happening in Oklahoma where the people seem to understand the critical importance of education in preventing the disintegration of a sense of community.

“Every 4-year old in Oklahoma gets free access to a year of high-quality pre-kindergarten. Even younger children from disadvantaged homes often get access to full-day, year-round nursery school, and some families get home visits to coach parents on reading and talking more to their children.”  The aim of this program is not only to improve the quality of education but to break the cycle of poverty that weakens community cohesion. Bravo Oklahoma! In this state, as regards education at any rate, some are not more equal than others.

If we don’t begin to understand the distinction between the True self and the false self, our false self will continue to divide and shatter our community until all the animals in the barnyard of the U.S. will be at each other’s throats. “Bronze, silver, gold, platinum: a vocabulary once associated with jewelry or Olympic medals is now attached to your Hertz status, your Delta level, your Obamacare plan, establishing how far forward or back in the pack you belong, herding you into categories that sound suspiciously like evaluations of worth.”

Is this the direction we want our community to go? Disintegration with widening gaps in opportunity and commitment to community, or would we rather have integration, coming together with enhanced equality? Do we want a belief in the cohesive qualities of Oneness or the chaos of alienation between shattered fragments labeled inferior, lazy, scapegoats or some form of the other.  Our history has been one of unsustainable and failed attempts at creating nurturing and compassionate human “families.” We must soon learn to make these kinds of distinctions to prevent the collapse of our society.

If we continue to accept the beliefs, attitudes and values predicated on the self-centered survival of the fittest, we can look forward to not just the collapse of empires, city states and nations but an unprecedented nightmare on a global scale.

Strong, healthy communities are built on a foundation of shared experience, fairness, equality and, of course, justice. We should think about the distinction between competition and cooperation. But the crucial distinction that needs to be made is that between illusion and reality. American society today has no more viability than a barnyard run by arrogant, loutish and selfish pigs.