History: A Story, Your Story, Our Story, His-story, Her-story and The Story 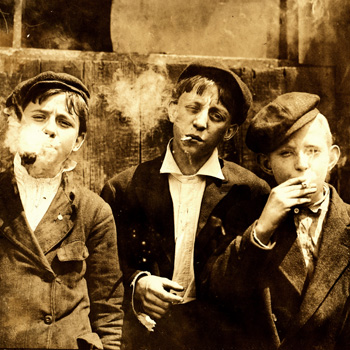 Are we saying that knowledge of history, however subjective, has no value? No! Knowledge of any kind in P-A is neutral. Knowledge can be helpful if we know what it means, if we know how to interpret it. The false self is incapable of using knowledge in a profound way because it lacks the ability to distinguish between reality and illusion. For example, let’s go back to colonial America when Big Tobacco was “little tobacco.”

It is not what we discover and invent that determines our fate but rather, how and why we use it. During the early years of the Jamestown venture, a gentleman John Rolfe experimented with raising tobacco. Up until that time the colony was on shaky ground and was not returning a profit to its investors. “His experiments with the raising of tobacco led to the establishment of that crop as the foundation of Virginia.” All that remained was to convince the people back home that the use of tobacco was hip and pleasurable. Given the hunger of the false self for another distraction from suffering, that was not difficult.

In a relatively short time tobacco became an object of craving and grew to be and remains one of the scourges of humanity. It was soon Virginia’s largest export, attracted thousands of colonists to become planters and along with other crops became a major impetus for the growth of slavery throughout much of the South. Seeking the illusion of pleasure we often fall into the trap of habit. “Cigarette smoking surged at the beginning of the 20th century, and into the mid 1970’s, about 40 percent of American adults were smokers, and they could smoke everywhere they wanted—in restaurants, on buses and airplanes, in workplaces and college classrooms, in their cars with the windows up and their children in the passenger seats.”

It’s not as if Americans didn’t have the knowledge about the harmful effects of tobacco, it’s more that most smokers didn’t want to know and were quick to deny the implications of what they learned or inadvertently discovered. “A Johns Hopkins researcher reported in 1938 that smokers did not live as long as non-smokers … In 1964, the U.S. surgeon general, Luther L. Terry, issued a landmark report. It linked smoking and cancer and set in motion decades of measures that deeply cut into smoking rates and tobacco’s profits and [political] influence, beginning, first, with Congress’s passing measures that required health warnings on cigarette packages and later banning cigarette advertising on the radio and TV … In 1998, they [Big Tobacco] agreed to pay $206 billion to settle a lawsuit brought by the attorneys general of 46 states, who were seeking compensation for costs to the public related to smoking-related illnesses.”

It took about 50 years to reduce rates of tobacco consumption from 40 percent to today’s 18 percent. To change ingrained habits involves the changing of the context or story. What is socially acceptable has to be made socially unacceptable. Changing the collective story in a culture results in a change of identity and people who quit smoking did so in part because they could no longer see themselves as smokers. “Our story” becomes “my story.” This is one of the ways that history unfolds.

Don’t expect Big Tobacco to go away until we learn to cope with the desires of the false-self sensation center. As long as there are sleepwalkers desperate to escape their neurotic anxieties there will be a market for new generations of tobacco products. “Reynolds American Inc. is launching a cigarette that heats tobacco rather than burning it, hoping to capitalize on the growing appetite for alternatives to traditional smokes.”

This latest cigarette follows on the heels of the E-cigarette or vapor cigarette already marketed to young people. “‘It needed the mass presence of vapor products to open up an experience base that smokers understood,’ said J. Brice O’Brien, head of consumer marketing for the maker of Camel and Pall Mall cigarettes.”

What if a town wanted to protect its young people and by outlawing all tobacco products? Don’t underestimate the ability of the easily offended false self to rationalize how tobacco use was a basic American freedom. Yes, like rapid-fire assault rifles.

The Board of Health in Westminster, Massachusetts (November 2014) voted to ban the sale of all tobacco products in their town, the first town in the U.S. to try this. One would think that the British were coming again in the state where Lexington and Concord girded up their loins to resist foreign invasion. But this time it’s not the freedom from taxation that is being defended, it’s the freedom to commit suicide.

Andrea Crete chairwoman of the Board of Health said, “The Board of Health permitting these establishments to sell these dangerous products that, when used as directed, kill 50 percent of its users, ethically goes against our public health mission.”

What about protecting the young people of the community? Again, Andrea Crete quoting from a report from the surgeon general, “said that youth who shop at least twice a week in stores that sell tobacco are 64 percent more likely to start smoking than those who do not.”

The majority of citizens in Westminster, however, later proved that they were more concerned with their right to buy tobacco products than their health or the health of their children. This we recognize as an extreme reaction of the false self. Dr. Corey Saltin, a lung specialist in private practice near Westminster said he “understood concerns about free choice but that people who are subjected to secondhand smoke have rights too. ‘This ban is going to happen somewhere, sometime,’ Dr. Saltin predicted. ‘But probably not in Westminster.’”

Most of us have many deeply ingrained habits that are unhealthy. Some destructive habits are part of our identity as individuals, or some a part of our identity as a member of a nation or community. The beliefs (smoking is cool), attitudes (it’s nobody’s business if I want to smoke) and values (the choice to smoke should be a fundamental freedom in a democracy) explain the stories of many people who rationalize the behaviors driven by their mostly unconsciously held false-self survival strategy.

The problem that some of us fail to see is that all individuals in a community are connected and any individual’s behavior ultimately effects the rest of us. A successful community is not one where the individual is free to do their own thing, but rather one in which the highest value is sharing and caring for one another. The current dilemma related to global warming brings out two different stories or worldviews expressed by Washington politicians concerning how to react to this threat.

“But Republicans are betting that despite the polls, they can make the case that regulations to cut greenhouse pollution will result in the loss of jobs and hurt the economy.” In other words, Republicans are appealing to the more immediate need of the security center of the collective American survival strategy. The story of the individual’s need for employment trumps the story of the human community as a whole, or the softer message of long-term planning is drowned out by the blare of the short-term anxiety many individuals have. Two different stories leading to two different behaviors.

The role that the other played in the story of colonial Jamestown had the colonists projecting on the indigenous people and vice versa with tragic consequences that remain a part of America’s story today just as the story of the slave as “other” working in the tobacco fields impacts American identities today.

The past is never dead. It’s not even past.
William Faulkner

“For example, counties in America that had a higher proportion of slaves in 1860 are still more unequal today, according to a scholarly paper published in 2010. The authors called this a ‘persistent effect of slavery.’”

Corporations and companies helped perpetuate a form of slavery long after the Civil War. “Douglas Blackmon won a Pulitzer Prize for his devastating history, Slavery by Another Name, that recounted how U.S. Steel and other American corporations used black slave labor well into the 20th century, through ‘convict leasing.’ Blacks would be arrested for made-up offenses such a ‘vagrancy’ and then would be leased to companies as slave laborers.’”

In 2014 The Walk Free Foundation, a human rights group based in Australia, examining 167 countries, found that India had 14.3 million people who were victims of slavery among the global total of 36 million. But surely slavery today has finally been eliminated in the U.S. Guess again. “About 60,100 people are exploited as forced laborers in the U.S.”

Those who see history for what it is, a story, may come to realize that it has always been thus. We get up each morning and create fundamentally the same story as we did the day before which becomes “our story” and we expect it to change but it never has—and it won’t—until we admit that we have grown weary of the old story, the old identity and the old catastrophic behaviors.

“Hunger came to the countryside, to the towns, to Paris, it was sharp enough in the masses to overcome tradition, reverence, and fear, and to provide an instrument for the aims and brains of well-fed men. The dykes of law and custom and piety broke, and the Revolution began.”  For some, chaos is catastrophe, for those with a lust for power, it is an opportunity. For those of us who understand that history in P-B never changes, we know it to be an illusion and we know how to escape with our heads still on our shoulders, but most people today are headed for some version of the guillotine.

This entry was posted in 3 Essays and tagged female, history, male, oneness, other, paradigm A, paradigm B, point of power practice, relationship, shadow, story, worldview. Bookmark the permalink.

1 Response to History: A Story, Your Story, Our Story, His-story, Her-story and The Story