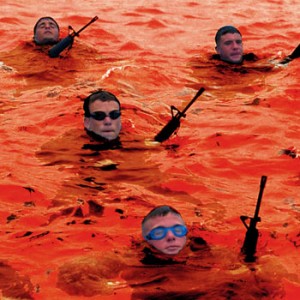 Are we the turtle in the turtle soup? If we plunged a live turtle into a pot full of boiling water he would struggle to get out. Putting him in a pot of cold water he would swim around contentedly and would not notice as we gradually turned up the temperature. He was destined to become turtle soup but wouldn’t be aware of it until too late. As in this crude analogy, humanity is swimming around in P-B unaware that the water is getting warmer, and we don’t mean global warming.

What is happening is a growing violence on the planet and the fading of what little compassion exists. Fear is increasing the temperature in our relationships and our tendency to become ever more defensive, ever more fearful. How does this happen and what effect is it having on the human community? Is there evidence of an approaching darkness driving human behavior?

Once again we enter that region of P-B where fear and the other meet to spark the raging fires of delusional hatred. In the essays found in the Simple Reality books and on the Simple Reality blog, we tell this tragic tale again and again where only the details of the story vary. Why so much repetition? Because humanity must be roused from a deep sleep and we must shake the drugged sleeper vigorously, relentlessly and even violently. We resist acknowledging the tragedy in which we are immersed and we deny the slowly increasing temperature of a stew in which we will ultimately end up being “cooked.” And so we try again.

Are all humans capable of violence? This question is often asked and we will never get anywhere trying to answer it because it is the wrong question. The question that will get us to a profound answer is: Is the false self capable of violence? The answer is yes and now we can begin to have a fruitful conversation arriving at an answer that points the way to eradicating violence on this planet.

Like the overwhelming majority of human beings, 19-year old Sean O’Callaghan, a paramilitary member of the Irish Republican Army in 1976 did what most of us would find unthinkable. His insights on what happened and why they happened are unpleasant to read about but we must.

What was unusual in 1976 has become in our world today commonplace. Catholic IRA gunmen stopped a van in Northern Ireland with 12 workmen aboard. They freed the one Catholic, lined up the 11 Protestants and shot them one by one.

Watching television today (2013) Sean O’Callaghan sees images of terrified people running from jihadi militants inside an upscale mall in Kenya. Some of the people had been asked their religion by the terrorists. Muslims were spared and non-Muslims were shot. Replying to a comment by a friend watching with him he replies, “But we used to do the same thing.”

This “whoops” can be said of all human violence because the people being killed are not who they are said to be. The false information comes within a bogus context and from a false identity like that of the deluded O’Callaghan. Innocents are being killed by innocents. This is an absurdity but nevertheless it can be understood and we can change that behavior.

The story plays a crucial role in determining our identity. In Northern Ireland, the older men told the younger boys about the mythological Easter Monday uprising in 1916. A blend of Catholic religion and Irish nationalism was added to the narrative. Along comes Sean O’Callaghan, age 15 looking for an identity that would give his life meaning and a way to express the anger he felt about the injustice of the treatment of refugees he had seen flowing from Belfast into southern Ireland.

Now we answer the question posed above. Are we all capable of egregious violence?  “‘We are all capable of such things,’ said Mr. Kelman, 86, whose family fled Vienna under the Nazis in 1939.” Kelman is professor emeritus of social ethics at Harvard. Social psychologists say a culture like that found in Germany, with emphasis on authority and obedience can replace individual moral responsibility with loyalty to a larger mission. In such a culture, men like Hitler and German Nazi propaganda minister Goebbels, can persuade fellow citizens to overcome the moral inhibition against murder. All they had to do was to point to an image of the other that they said was responsible for the perceived injustices and the economic hardships being experienced by the German people during the worldwide depression.

However, and this is exceedingly important, so pay attention now, the dehumanized other, a figment of the P-B imagination, would be magically transformed into a friend if we would but come to know them. Professor David Livingston Smith, professor of philosophy at the University of New England, is the author of the book Less Than Human: Why We Demean, Enslave and Exterminate Others. “‘Thinking about your enemies in sub-human categories is a way of creating a mental distance, of excluding them from the human family’ he said. ‘It makes murder not just permissive [permissible] but obligatory. We should kill vermin or predators.’” In other words we have a choice and up until now on this planet we have been making a bad, bad, bad choice.

Katrin Bennhold writing for The New York Times Book Review reinforces Smith’s thesis. “The Hutus in Rwanda called the Tutsis cockroaches, the Nazis depicted the Jews as rats. Japanese invaders referred to their Chinese victims during the Nanjing massacre as “chancorro,” or “subhuman.” American soldiers fought barbarian “Huns” in World War I and godless “gooks” in Vietnam.”

Sean O’Callaghan wrote a memoir entitled The Informer because he eventually became an informer for the Irish police. By his own admission, he had killed many times and was finally caught, pleaded guilty to 42 crimes, was sentenced to 539 years in prison and was pardoned after serving eight years. He was a free man in 1996 but not free of his memories and dreams. Nor was he free from words that haunt him still. After one assassination, his female getaway driver finally breathed a sigh of relief when they dumped the stolen car and said sadly, “I feel sorry for his mother.”  Yes, he was a human being and had a mother. She could have said, “He was just like us.”

We are not likely to feel compassion for or identify with people even in our own nation whom we seldom interact with or get to know personally, especially if we are “well off.” For example, there is a growing “empathy gap” in the U.S that seems to be related to that economic gap between the 1% and the 99%. Professor of psychology at Berkeley, Dacher Keltner, and psychology professor Michael W. Kraus of the University of Illinois have revealed research that indicates the higher the income level the lower the ability to feel compassion for one’s fellow citizens. “While Mr. Keltner’s research finds that the poor, compared with the wealthy, have keenly attuned interpersonal attention in all directions, in general, those with the most power in society seem to pay particularly little attention to those with the least power.”

What is obvious to those of us who study human identity is that those Americans of lesser economic or social status are being categorized as the less than human other. As Daniel Goleman, the author of Emotional Intelligence puts it: “Social distance makes it all the easier to focus on small differences between groups and to put a negative spin on the ways of others and a positive spin on our own.”  In behaving this way we weaken the fabric of society and spin a web of self-destruction.

Professor of psychiatry, Vazmik D. Volkan, at the University of Virginia remembered that Freud called this tendency to project on those who are in some way different the “narcissism of minor differences.”  Professor Volkan experienced this toxic behavior on the politically divided island of Cyprus when hostile Greek Cypriots failed to see those in his Turkish community as human. The Turks, of course, returned the compliment.

We are all “in the soup” on planet earth and we must find a way to get out. The water will soon be boiling and we will not be able to distract ourselves from or deny the reality of our situation much longer (we hope). The solution on Cyprus is the same as it would be anywhere where similar hostilities exist between groups of people. Find a way to spend time together and friendships would naturally develop. Humans are not naturally lacking in compassion; quite the contrary.

Professor Thomas F. Pettigrew, professor of social psychology at the University of California, experienced racism as a child in Virginia. “In his research, he found that even in areas where ethnic groups were in conflict and viewed one another through lenses of negative stereotypes, individuals who had close friends within the other group exhibited little or no prejudice. They seemed to realize the many ways those demonized “others” were “just like me.”  Precisely!