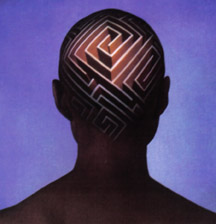 The intellect can play havoc with our experience of life. As a fundamental component of the false self, it can increase the intensity and complexity of the P-B illusion. But it can also give us insights into what an alternative experience of life could be like as it gives us glimpses of the good, the true and the beautiful. The digital world is presenting new challenges for the “animal that reasons” while at the same time pointing to a way out of the maze in which we wander lost in despair. Are we paying attention?

Carina Chocano will act as our guide into the maze of mood boards (or inspiration boards), containing both blind alleys and turns that sometimes seem to lead to liberation from our discontent. “Why not dive into an alternative world full of beauty and novelty and emotion and the hard-to-put-your-finger-on feeling that there’s something more, somewhere, where you’re not chained to your laptop, half dead from monotony, frustration and boredom.” Why not indeed—here’s why not!

What are these sites like, who uses them, why do they use them and what does it all mean? Glad you asked! Those of us who have worked in the creative professions might be familiar with “pin boards” on which we posted visuals like photos, graphs, charts and drawings useful (or inspirational) for the creative process. Taking the words “pin” and “interest” one site designer arrived at the name Pinterest. On this social-media website users compile collections of pictures they find on the internet or browse the collections of others. By the end of its first year Pinterest had 10,000 users and by January 2012, 11.7 million. Valued at $1.5 billion, the site must have been perceived by investors as meeting the needs of its users. What are those needs?

It is at this point that the sensation energy center of the false self and the P-B narrative converge. Let’s hear from our guide who admits to being an obsessive user of social media web sites. “I used to think this obsession was mine alone. But now nearly everyone I know—and by that I mean everyone who spends vast, barren tundras of time at her computer—goes to Web sites like these to escape, destress, perk up, calm down, feel something, not feel something, distract themselves and (they don’t call it ‘lifestyle pornography’ for nothing) modulate pleasure and arousal. A friend of a friend calls his addiction to sites like these ‘avenues for procrastination,’ but I think there’s something else involved.” Probably so! But what?

Pausing at this point in our romp through the maze we need to remember to keep our focus on Simple Reality. First, as our guide has made clear, for many people using social media web sites, life is unsatisfactory and they are looking for ways to repress anxiety or distract themselves from their pain. Like the rest of us, they are identified with their body, mind and emotions and their reaction to this false-self identity is a major source of their fear and discontent. Are the various sites used as a kind of painkiller? “Perhaps there’s a neurological component to all this; to the sudden rise of the mood board as mood regulator, a kind of low-dose visual lithium.” Chocano seems to mean a kind of pseudo-pharmacological “zoning out.”   (Lithium is a “mood stabilizing” drug.)

Since we are using the metaphor of the maze we need to bring a rat into the picture. What is attracting the human rat to these sites? “V. S. Ramachandran, in his book The Tell-Tale Brain, likened this [mood boards] to a behavioral experiment: if a rat is rewarded for choosing a rectangle over a square, it will learn to respond to ‘rectangularity’ and start to favor rectangles in general. So maybe we are like the rats, and what we’re seeking while idly yet compulsively cruising Pinterest is really just the reliably unpredictable jumble of emotions that their wistful, quirky juxtaposition evoke. Maybe that is our rectangularity.”

Indeed it is! We are all, to some degree, reacting to and pursuing anything that seems to relate to the plenty, pleasure and power that we have been conditioned to seek all of our lives. The German word Schnusucht translates as “addictive yearning.” Is this why so many people are attracted to these sites? Chocano thinks so.  “This is, I think, what these sites evoke: the feeling of being addicted to longing for something; specifically being addicted to the feeling [emotion] that something is missing or incomplete. The point is not the thing that is being longed for, but the feeling of longing for the thing.” When we remember that the sensation energy center of the false self is also the center of all human addictions we can tell that we are onto something.

“What Is It We Are Longing For?” was a paper published in The Journal of Research in Personality. Listen for how the intellect begins to contribute to complicating what we know to be “Simple” Reality. Psychologists, sociologists and others are beginning to learn about what has come to be called “tritime focus.” We head people love to create labels, models and constructs—and, oh yes—mazes.

The longings mentioned in the paper we recognize as reactions, pure and simple. They are aspects of our lives that “are incomplete or imperfect; [involve] overly positive, idealized, utopian imaginations of these missing aspects; [focus on] incompleteness on the one hand and fantasies about ideal, alternative realities on the other hand; [result in a] temporary complex experience [combining] memories of the past, reflections on the imperfect present and fantasies about an idealized future; [and that] make individuals reflect on and evaluate their life, comparing the status quo with ideals or successful others.”   That’s what people are doing on Pinterest—and Facebook—andTumblr—and Myspace—and Apartment Therapy—and Fiffound—and Poppytalk—and on and on and on.

Those are some of the behaviors and some of the social-media web sites we use to leave the present moment. There are hundreds of ways to avoid taking responsibility for our life’s experience and which cause us to end up lost in the maze of life while searching for our True self. What is the down side to this behavior if we haven’t already guessed?

Before we go on we should be fair and let the co-founder of Pinterest weigh in as to why he was involved in creating the site. “The site’s co-founder, Ben Silberman, has said that in creating the site, he was just picking up on something people were already doing—i.e., collecting beautiful things and using them as a way to express who they are to the world—and making it easier for them to do it.”

Sounds good until a nagging question presents itself: Do they know who they are?  The answer to that question is—no! We do know that when most people fire up their computers it is often the false self in the driver’s seat. One commenter sensed the truth of his reactive behavior on Tumblr when he wrote: “My Tumblr isn’t so much curated space as it is a symptom of deeper pathologies made manifest.”  Yep, that’s true.

Social-media on the web is precisely the type of behavior that will insure that we will never find our way out of the maze—which we created for ourselves by the way—but didn’t realize that when we were doing it. Our guide has a sense of the down-side of this self-destructive behavior. “These sites are not meant (as curation is) to make us more conscious, but less so.” Curation is an activity, existing as it does in the world of artistic self-expression, which is more likely to be an expression of the True self.

Let’s give a hand to our very excellent maze-guide and let her have the last word or perhaps the next-to-the-last word. “The feeling [she means afflictive emotion] is the point. And now we can create that feeling for ourselves, then pass it around like a photo album of the life we think we were meant to have but don’t, the people we think we should be but aren’t.”

The whole point of a spiritual growth practice is to recognize what is mind-blowing to most of our fellow maze dwellers: the maze doesn’t exist—pleasure is pain—and escape from P-B is possible. We must ultimately face up to our self-destructive behaviors (social media on the web, for one) and choose another way out of our pain and suffering, and then we have a real chance to be the person we should be.

References and notes are available for this essay.
For a much more in-depth discussion on Simple Reality, read  Simple Reality: The Key to Serenity and Survival,  by Roy Charles Henry, published in 2011.