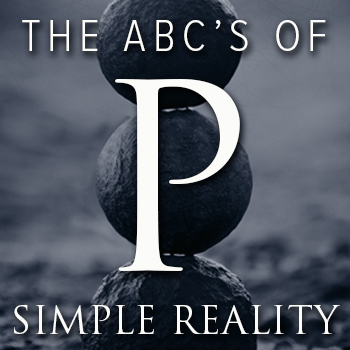 Peace cannot be found in “the world,” that is to say, in P-B. Whether we are speaking of “peace of mind” or world peace as in the absence of war, peace is unknown in the P-B story. It never was and never will be. However, in Simple Reality (P-A) peace is a given, it is guaranteed because it is an intrinsic quality of the state of being of all who enter therein. If we can be in response to life, we will experience peace.

Some animals have the ability to make themselves all but invisible. They have amazing strategies to change color and patterns to achieve a kind of camouflage visually receding into the patterns of their backgrounds. Humans, on the other hand with their false-self identities are often doing the opposite, calling attention to themselves. What has this got to do with peace?

The True self has no need to bring attention to itself and there is a kind of liberation and anonymity that often accompanies a response rather than the “it’s all about me” reaction. Such a response is not an expression of weakness. “Rather, it can be a condition of insight and endurance, a position of strength and power, a matter of knowing how and where we can be best accommodated by the exterior world. It can reflect a knowledge that we are of a larger world and that our survival depends on knowing this—not a bad thing to be reminded of when our distractions of the natural environment result in everything from freakishly warm temperature to ocean acidification.”

Journalist Akiko Busch, in his article entitled “How to Be Invisible,” could well be referring to the Buddhist principle of no “I,” or “me,” the non-existence of the reactive false self, which is after all, the root cause of all violence in the global village.

“If we desire peace, each of us must begin to demythologize the enemy, cease politicizing psychological events; re-own our own shadows; make an intricate study of the myriad ways in which we disown, deny, and project our selfishness, cruelty, greed, and so on onto others; be conscious of how we have unconsciously created a warrior psyche and have perpetuated warfare in its many modes.”

Barbara Kingsolver was a recipient of the National Humanities Medal in 2000 and wrote the following piece in the November 23, 2001 issue of The Washington Post. She focuses on, among other things related to the subject of peace, humanity’s belief in the other, which, like our belief in our false self-identity, is a fundamental cause of violence. Her vivid description of the behavior of the false self could give many of us helpful insights into our own complicity in perpetuating violence.

“Lately I’ve been saying this quiet word, ‘wartime.’ It brings a taste to the root of my tongue, and to my ear the earnest tone of my parents recalling their teenage years. The word speaks of things I’ve never known: an era of sacrifice undertaken by rich and poor alike, of gardens planted and warm socks knitted in drab colors, people conquering fear by giving up comforts so everyone on earth might eventually have better days.”

“I went looking to see if I was imagining something that never happened. I found a speech made by Franklin D. Roosevelt on Jan. 6, 1941, that made me wonder where we have mislaid our sense of global honor. ‘At no previous time has American security been as seriously threatened from without as it is today,’ he said, as he could have said this day. But instead of invoking fear of outsiders he embraced their needs as our own and called for defending, not just at home but on all the earth, what he called the four freedoms: freedom of speech and expression, freedom of religion, freedom from fear, freedom from want.”

“‘Translated into world terms,’ he said, the latter meant ‘economic understandings which will secure to every nation a healthy peacetime life for its inhabitants.’ He warned that it was immature and untrue ‘to brag that America, single-handed and with one hand tied behind its back, can hold off the whole world’ and that any such ‘dictator’s peace’ could not be capable of international generosity or returning the world to any true independence. ‘Such a peace would bring no security for us or for our neighbors. Those who would give up essential liberty to purchase a little temporary safety deserve neither liberty nor safety.’”

“We seem to be contriving a TV-set imitation—the look with no character inside—in our new wartime of flags flapping above shopping malls and car sales lots, these exhortations to purchase, to put down a foot and give not an inch. There’s a rush on to squash the essential liberties of others and purchase some temporary safety for ourselves.”

“The four freedoms are not much in evidence. Faith and speech have taken hard blows, as countless U.S. citizens suffer daily intimidation because their appearance or modes of belief place them outside the mainstream of an angry nation at war. Any spoken suggestions about alternatives to violent retaliation are likely to be called an affront against our country. I struggle to find some logical path that could lead to this conclusion, that free speech is un-American, and find as its only source our president’s [George W. Bush] statement: ‘Either you’re with us, or you are with the terrorists.’ He was addressing nations of the world, but that ‘us’ keeps getting narrower. If FDR’s words were published anonymously today, especially those about force leading only to a ‘dictator’s peace,’ FDR would get hate mail.”

“Gone is the inclusive vision of an earlier president. Freedom from fear, freedom from want—these clearly aren’t meant just now for the millions of Afghan civilians placed at risk of starvation because of the war. Our campaigns proudly place our safety and material prosperity ahead of any concern for the majority of world citizens who are starving and frightened—or for that matter, the hungry here at home.”

“Just 13 months after Roosevelt’s eloquent call to conscience, the War Department persuaded him to order the internment of Japanese Americans. (The War Department, it’s now known, manufactured threats of resident treachery to stir public fear and uphold the concentration camps.) I’m sad to see how far things fell from that January day when the lives of civilians on other soil were proclaimed as precious as our own. I would have planted a victory garden and accepted leaner rations to further that vision of a kinder world, in which all hungers mattered.”

“After the famous speech, Norman Rockwell painted the four freedoms; his ‘Freedom from Fear’ shows two parents in a darkened attic bedroom tucking two little boys into bed. To look at that image now brings my thoughts to two other children, one nearby and one very distant. As our war drives a population into refugee status, immense waves of new recruits are entering schools in Pakistan and other places where young men train to a lifelong vow of vengeance against America. One, somewhere, is just a boy, the age of my youngest child. Today these two enter new lifetimes of hater and hated, and that door locks behind us all.”

“The pacts begun today will long outlive the men in Washington and the momentary popularity of this war. Do they really believe we have bombs enough to destroy every storefront or cement shell in the world that could serve as a school for hatred, when hearts are so turned? If those men can’t tap into a vein of compassion right now, I ask that they search out prudence. I am the parent tonight in that darkened bedroom, with my knuckle to my mouth as I look at these children. I raise my voice now to echo Roosevelt’s plea for a worldwide reduction of armaments ‘in such a thorough fashion.’ He said boldly—yes, in wartime—that no nation, ‘will be in a position to commit an act of physical aggression against any neighbor, anywhere in the world.’”

“My parents undertook wartime as a submission to sadness, not an indulgence in glory. They were led through it by a man who spoke with a heart full of intelligent remorse, rather than an eye on the polls of his popularity. I wonder what’s happened to leaders who saw enduring peace as a house built on right, not might, and knew the world can’t be right until all its people live free from hunger, censorship and the dread of bombs. I wonder where they are now, all the teenagers and adults of that great generation who threw their hearts into an era of living simply, that others might simply live.”

“There’s a hollow ring to this loud new wartime motto, ‘We’ll show our enemies we’re more powerful than they are.’ Our enemies know that already, they’ve known it all their lives as they trained to the careful, hateful mastery of tools the weak may use against the mighty. They can plainly see we are richer, stronger, in every way more capable of destruction. I would like us to show them, instead, that we are better.”

Question: What is the best way to work for world peace?  Raman Maharshi has some profound questions and answers. “What is the world? What is peace and who is the worker? The world is not in your sleep and forms a projection of your mind in your jagrat [waking state]. It is therefore an idea, there and nothing else. Peace is the absence of disturbance. The disturbance is due to the arising thoughts in the individual, who is only the ego rising up from Pure Consciousness. To bring about peace means to be free from thoughts and to abide as Pure Consciousness. If one remains at peace oneself there is only peace everywhere.”

Whenever you deeply accept this moment as it is—no matter
what form it takes—you are still, you are at peace.
Eckhart Tolle

Peace can only be achieved with the cessation of craving and aversion which in turn is to be found in the Now. In P-A the pursuit of security, sensation and power no longer makes sense nor does our identification with body, mind and emotion. When we reach the consciousness that is content to do nothing, have nothing and know nothing, we are at peace.