Religion and the Devil 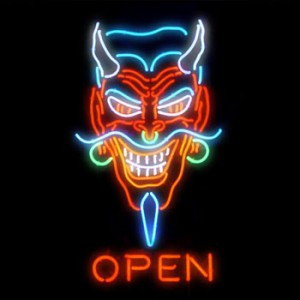 Since we began our last essay with the question does God exist, the least we can do is give the devil equal billing. Does the devil exist? Now we can have some fun because we can say that the existence of Satan depends on the existence of God. No God, no Satan. The birth of Satan was necessary given the Old Testament judgmental God who had no mercy. “His capriciousness knows no bounds. However, if this portrayal is unacceptable, there must be an “adversary” (the literal meaning of Satan’s name) to take the blame away from God.”   So the devil exists to get God off the hook for His violent and judgmental behavior. It is not surprising then that we human beings use the devil in the same way, e.g. “the devil made me do it.” Projecting on the devil has been around a long time in human consciousness and occurs at the beginning of the story of humankind in the Bible.

And the Lord God said unto the woman, “What is this that thou hast done?”
And the woman said, “The serpent beguiled me, and I did eat.”
Genesis 3:9-13

“According to recent Gallup Tuesday briefings, Americans are more than twice as likely to believe in the devil (68 percent) as in evolution.”   What is very interesting, when combining these two beliefs, is what we can call the evolution of the devil. As we saw in the previous essay, God is evolving as human consciousness evolves. We should not then be surprised that the same is true of the devil, or rather, our ideas about the devil.

The devil is often conceived as an adversary, the enemy of our better selves. But who is this enemy really? Following the battle of Lake Erie in 1813, the American naval commander, Oliver Perry reported that, “We have met the enemy, and they are ours.” Paraphrasing Perry we find on the first Earth Day poster in 1971 the cartoon character Pogo saying, “We have met the enemy, and he is us.” Of course, this is the heart of the necessary realization concerning the identity of the devil in P-B. The “devil within” is the “devil without” and the only devil that has ever existed. In P-A, we must come to accept the responsibility of that reality and the wonderful opportunity it represents at the same time.

“When Jesus said that the devil (diabolus in Latin) is a liar and the Father of Lies (John 8: 44), he was talking about the rational dualistic vision by which almost all humans see this world, the intellectual seeing that chops up the world, separates us from each other, and separates us from God. The words “devil” and “daemon” and “duality” are all based on the root for “two” or, in Greek, duo. In Genesis the devil, the Father of Lies, is pictured as a fork-tongued (dual-tongued) snake. [When we shift to P-A and] attain non-dual consciousness, the Devil, or duality, is completely squashed.”

Human beings engage in projection “upon” the devil, a process we saw operating with God also. Evil exists, in other words, as the blamable other—who can always be counted on to spare us the exigency of examining ourselves. This form of “evil as the threatening other,” has taken many forms in American life. In our early history (to American Protestants) it was that “Whore of the Devil,” the “Church of Rome.” More recently, it was Communism. Now that this last devil, which Ronald Reagan confidently named the “evil empire” has disintegrated, the question is: what will come next in the Satanic succession?

In the history of America, the devil has been significant in two different ways. First, we have projected our own inner devil (our shadow) onto our “enemies,” the so-called other. Secondly, we have feared the devil in creation itself in the form we call nature. For example, as colonists, we feared the indigenous peoples and the untamed, dark forbidding forests and wild animals. The movement west across the American continent was a violent and destructive assault on the dark, and threatening projection of our own inner demons.

Arthur Miller in his allegorical play The Crucible (1953) compared Senator Joseph McCarthy to the Salem witch-hunters and denounced McCarthyism as an example of the human tendency to project inner evil outside the self.

Americans will continue this process of discovering the interior devil “out there” until we can shift to a more profound awareness of our own nature and begin the process of “exorcism.” Each individual is responsible for this daunting task which is at the same time an extraordinary opportunity to attain freedom from suffering, suffering at the hands of an imaginary Satan. We are not separate from nature, no matter how threatening we imagine it to be and we are not separate from our own nature as human beings. The devil as “enemy” is indeed within.