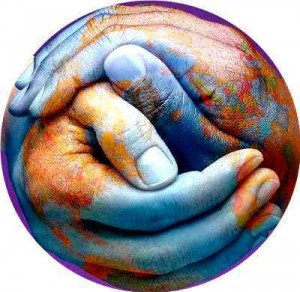 Simple Reality when profoundly understood can be characterized as a myth. In the context of P-B humanity lives in a mythless state which explains the disintegration of our human community. As Edward Edinger says, “It is evident to thoughtful people that Western society no longer has a viable, functioning living myth. Indeed, all the major world cultures are approaching… the state of mythlessness.”  Therefore, creation of a myth that will work for humanity must have the highest priority. We will now learn about that new or modern myth.

What is happening within the global village as we experience the loss of a living myth? “…values disappear and are replaced by the elemental motivations of power and pleasure, or else the individual is exposed to emptiness and despair.”  We recognize the description of the human condition because we are all contained in that story and spend too much of our time seeking relief in the pursuit of plenty, pleasure and power.

While 21st century humanity puffs up its chest at very impressive intellectual achievements and unprecedented prosperity (for the oligarchs at least), we are unaware that we are descending backwards into the darkness. “Meaning is lost. In its place, primitive and atavistic contents are reactivated.”  [By “atavistic contents” Edinger means the reappearance of characteristics in an organism such as primitive survival of the fittest behavior, after several generations of absence.] In general, human behavior as we have learned by our insights into P-B, is fast becoming self-destructive and therefore unsustainable.

As C.G. Jung discovered, the answer to the Third Great Question: Why am I here? is to create consciousness or we could say, to wake up. Some fundamental definitions are in order before we continue our examination of mythology. The goal for humanity is grasping Simple Reality as our new narrative. Becoming conscious of Oneness is what is meant by the creation of consciousness.

In order for the ultimate Reality of Oneness to be intellectually understood, a second split into a subject and an object was necessary for the experience of consciousness to occur. Oneness or undifferentiated experience began to shatter into the illusion of opposites. When the subject of knowledge is separated from the object of knowledge, the act of knowing or the creation of consciousness becomes possible.

As Eric Neumann, author of The Origins and History of Consciousness puts it: “This act of cognition, of conscious discrimination, sunders the world into opposites.”  What humanity takes to be “reality” is the experience occasioned by the requirements of the human intellect and is several “splits” removed from the actual experience of Simple Reality.

The first split of Oneness is that of humanity from nature or the whole of Creation. “The ego separates from the pleroma [spiritual divine nature, divine plentitude or abundance].”  As the splits continue with humans alienated from one another, from the contents of their own shadow, from their personal unconscious and from their collective unconscious, the truth they seek becomes increasingly illusive.

How then is truth discovered? That was demonstrated long ago by Buddha. The “insight meditation practice” that he demonstrated, turning within away from the world of form, involves becoming the objective observer of our experience. Understanding that our relationship with our body, mind and emotions is based on illusion we intuitively return to Oneness, the Great Insight or what Buddha called Right View as the basis for our new myth.

To repeat, Jung discovered that the answer to the Third Great Question: Why am I here? was to create consciousness or we could say, to live in the Now. In the context of Simple Reality we have learned that the purpose of life is to express compassion, hence, living not only with others but for others. Notice how Jung comes to this realization. “Jung was aware of this fact concerning his own life. Speaking of his confrontation with the unconscious he writes, ‘It was then that I ceased to belong to myself alone, ceased to have the right to do so. From then on my life belonged to the generality.”  Creating consciousness therefore means, among other things, the expression of compassion.

The experience of consciousness is identical to what we call “feeling” in the context of Simple Reality, or being in the present moment. It is an ineffable, intuitive experience and hence, beyond words or description by the intellect. The Dictionary of Philosophy corroborates this by saying that “Consciousness is generally considered an indefinable term or rather a term definable only by direct introspective appeal to conscious experiences [feelings]. Consciousness cannot be defined: we may be ourselves fully aware what consciousness is, but we cannot without confusion convey to others a definition of what we ourselves clearly apprehend. The reason is plain: consciousness lies at the root of all knowledge.”

Jung’s experience was a paradigm shift and Edinger characterizes it as the first such shift of the modern age. “Jung’s discovery of his own individual myth will prove to be the first emergence of our new collective myth.”  We are less interested at this point in questioning Edinger’s thesis but rather accepting for the time being Jung’s experience as archetypal rather than unique. “It becomes a paradigm, the prototypical life of the new age and hence exemplary.”

Jung, as the hero, was pushing into unfamiliar territory and returned with many a boon for the rest of humanity. We can take advantage of mythology, including Jung’s example, and use the map of Simple Reality for our own process of shifting paradigm or creating for ourselves a new and viable myth.