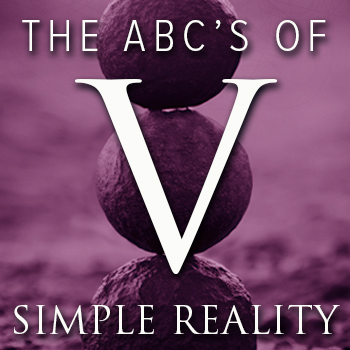 Adam blamed Eve
Eve blamed the snake
The snake didn’t have a leg to stand on.

Eventually as the buck is passed around and around we end up in the position of the snake. You have read enough of the Simple Reality content that you probably realize that you now have no one to blame for the experience you are having in life. You are responsible for tending the garden that is your experience of life. You can continue to choose to let it all go to weeds or you can bring it into full bloom.

The illusion of being a sinner can seem painful especially if you persist in refusing to acknowledge the weeds and refuse to pull them. The imaginary snake did not make you eat the toxic apple that caused you to fall asleep. You snooze of your own free will, you create your own narrative and you can choose to awaken from your nightmarish slumber but only if you can find the courage, the intention and have a plan. You are holding the plan in your hand.

Victimology is the study of the feeling of powerlessness, pessimism, despair, and negativity or ultimately of that which is an illusion. In P-A there is no victim because there is no “bad” as referred to in the dichotomy of good and bad and what’s more when profoundly felt, there is no separate “me” to be a victim.

One result of the consciousness of being a victim can be self-loathing. Religion in P-B has often supported this illusion by encouraging the self-imposed nonsense of sin.

Puritan minister Jonathan Edwards (1703-1758) demonstrated this in his sermons. “The God that holds you over the Pit of Hell, much as one holds a Spider or some loathsome Insect over the Fire, abhors you, and is dreadfully provoked; his Wrath towards you burns like Fire; he looks upon you as Worthy of nothing else but to be cast unto the Fire.” No self-esteem or self-reliance possible in that theology.    Edward’s belief, attitude and values from centuries ago still lives in the collective unconscious of humanity and in the conscious human worldview of many of the world’s people and does untold damage.

Another example of the life-long expression of the victim identity is found in the story of the great composer and conductor Gustav Mahler (1860-1911). He was a Jew making him a scapegoat or the other, a victim of the projections of those around him which was all too common in nineteenth century Europe. He had the same choice that we all have in life and that is to react or respond to that prejudicial treatment. He chose to react and his survival strategy involved immersing himself in the world of classical music. Perfectionism was a part of that strategy which did not endear him to his fellow musicians but did support the result of his becoming a brilliant composer and conductor.

He courageously chose to confront the “big” questions in his music. In his own words he questions “Why have you lived? Why have you suffered? Has it all been only a huge, frightful joke? We must all somehow answer these questions, if we are to continue, yes, even if we are only to continue dying. Whoever hears this call must give a reply.” Mahler’s reply is found in his great symphonies.

“‘The symphony [Symphony No. 2, in C minor, the ‘Resurrection’] opens with an angry rumble in the basses; and the ‘why’ of human existence is being questioned,’ said Milton Cross [and] ‘The questioning continues in the woodwinds, then loudly in the entire orchestra, until it becomes a frenzied outcry. There comes a quiet melody in the horns and strings, as if in reassurance, but the discontent of the opening returns, and before long we are hurled into the midst of a passionate struggle.’” In P-B life is a passionate struggle and for many like Mahler, almost continuous suffering. We can only wonder what his life and music would have been like had he made a different choice and afforded himself that rare opportunity to be a composer in the present moment; a composer whose music was filled with joy and compassion.

The energy for the victim-centered melodrama comes from the sensation energy center and consumes our natural joy like a psychological cancer. We identify with being a victim which frustrates our realizing our true identity which in turn drives our self-destructive behaviors.

The collective victim identity was expressed in an article in Life magazine in 1967. “Is it possible that this country’s artists can sound the fire alarm of a national nervous breakdown on the human level and be met with an assured, optimistic voice on the government, financial and technological levels? It must be either falsehood or pathology when people living within the same society, sharing a common fate, can have such different public pronouncements to make about being alive in America today. Who’s crazy—we or they?”

No one was crazy then or today but virtually everyone gets lost in the illusion of P-B because reality cannot be found there. In that milieu, every change in a society can be “sensationalized” into a threat and analyzed and intellectualized into a “breakdown.” In truth, there have been no changes or threats because reality does not change. Remember, that which changes has no substantial reality, it is a mere chimera existing as a figment of our false-self mind. We live in a global village where people are terrifying themselves—victims of their own and others’ imaginations. Are we crazy? We could say that behavior is a good definition of madness.

Do not expect much help from the human mind as regards your victim status. It is the problem not the solution. Take the supposed experts vis-à-vis the mind and human behavior—our psychiatrists and sociologist. “We have the word of an army of sociologists and psychiatrists that in the name of competition we emasculate worker and manager alike and turn them into gray-faced, status-seeking consumers. In the name of efficiency we are said to ravage rural landscape and city skyline, creating a festering megalopolis which is the despair of all who look on it.”  We can count on our own mind and the minds of others to aid and abet our self-destructive, victim tendencies because, after all, we are all engaged in the victim-centered narrative with victim identities.

The victim in P-B is as old as civilization itself. “Probably the world’s first alienated man on record was the anonymous Egyptian scribe who some 4,000 years ago wrote, ‘No more do we hear anyone laugh.’ Great men and small agree in saying: ‘Would that I had never been born.’ The masses are like timid sheep without a shepherd. Oh that man could cease to be, that woman should no longer conceive and give birth. Then, at length, the world would find peace.” We may not like to hear it, but if we are alienated from our society, ourselves and one another, it is because we choose to be. We may not make that choice consciously, but we choose, nevertheless, to be the victim.

This recurring P-B consciousness of being trapped in the role of the victim is reminiscent of the film Groundhog Day in which the character played by Bill Murray relives the same day over and over again. The next 4,000 years will be essentially the same as the last 4,000 as long as we continue to avoid the profound change involved with the paradigm shift.

The origin of our accepting victim consciousness is our failure to understand or accept our true identity. The dominant worldview (P-B) gives us our identity which includes the survival strategy of seeking security (we do not have enough to be worthy), sensation (we are not respected or lovable), and power (we live in a chaotic world where we are always at risk and are powerless to protect ourselves). In addition to the false self we are influenced by the collective unconscious and are beset by anxieties that are complex in origin and unconscious so that it may seem that we are the victim of strange, imaginary and hostile forces that we believe are real.

And finally, we have our personal history such as the unconscious shadow composed of repressed content that also is beyond our control or awareness and can seem hostile when encountered. The only effective response to this incredibly complex identity is simply to transcend it by refusing to identify with it. It is all an illusion having no substantial reality, it seems to exist in our individual minds and imagination and appears to exist in our conditioned reactions, our ingrained habits. A victim consciousness can be effectively combated by The Point of Power Practice and left behind in P-B as we attain the power of self-reliance and total emancipation from our former nightmare and the helpless and hapless false self.