Chapter 1 – Simple Reality and the Birth of Western Art 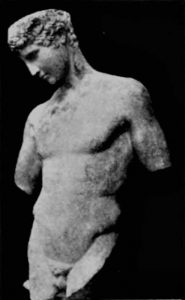 The souls of 500 Sir Isaac Newtons would go to the making up of a Shakespeare or a Milton.
–Samuel Taylor Coleridge (1801)

In the following essay, works of art are cited as examples of the principles or ideas being discussed. The reader is encouraged to view the works of art on a website, or in the books referenced.

The Romans were able to create a culture by borrowing from the Greeks and adapting some of the best elements of Greek institutions to their own identity. The old narrative and the new were synthesized into a shifted paradigm better suited to, what was then, the “modern” Roman worldview. “It was typical of the Romans to take from Greek architecture what they liked, and to apply it to their own needs. They did the same in all fields.”

The Roman Colosseum was built in 80 C.E. “On the whole it is a utilitarian structure, with three storeys of arches, one above the other, to support the seats of the vast amphitheatre inside.”  The Romans built for utility first and beauty second. Architecture in this case expressed a deeply self-destructive function and no human community expressing the brutal inhumane “entertainment” that went on in the Colosseum could endure for long.

The most outstanding achievement of the Greeks was the eloquent expression of beauty. For the Romans it was roads, baths and aqueducts. One, a soulful expression—the other, a reaction to the practical demands made by the false-self.

Even the adaptations in Roman art were subordinated to communicating to the people back home the successes of the far-flung campaigns that were “creating” the Roman Empire. “All the skill and achievements of centuries of Greek art were used in these feats of war reporting. The main aim was no longer that of harmony, beauty or dramatic expression.”  Artists began performing a sort of “journalistic” function and their artistic sensibility was subordinated to pleasing politicians.  (Fig. 75)

As a result, when pragmatism is dominant over the artistic sensibility, beauty is lost. When intuition or the “heart” is subordinated to the intellect or “head,” then the creative process, the free, inspired art of the present moment is lost and pseudo-art is the result. “At first, artists still used the methods of story-telling that had been developed by Roman art, but gradually they came to concentrate more and more on what was essential.”  (Fig. 87)  The artist in this new paradigm is serving an institution—not his own creative instincts or personal inspiration. He is no longer serving the instinctual evolutionary progress of the “implicate order” or his own True-self. Religious art, if it can be called art at all, is stiff and contrived—an expression of beauty is no longer the artist’s aim and hence, truth is lost as well. The natural evolution of art and the creative process ends.

“Artists no longer checked their formulae against reality. They no longer set out to make discoveries about how to represent a body, or how to create the illusion of depth.”  (Fig. 85 and 86)  We can see in these last two illustrations how the artistic imagination was stifled by the Eastern Church. “On the other hand, the stress on tradition, and the necessity of keeping to certain permitted ways of representing Christ or the Holy Virgin, made it difficult for Byzantine artists to develop their personal gifts.”

Once a paradigm becomes dominant—as the American worldview dominates modern societies today—it can influence for better or worse, the less vital cultures and their stories. The influences of Greek and Roman art were felt even as far away as the Orient. “During the centuries after Christ, Hellenistic and Roman art completely displaced the arts of the Oriental kingdoms, even in their own strongholds. Egyptians still buried their dead as mummies, but instead of adding their likenesses in the Egyptian style, they had them painted by an artist who knew all the tricks of Greek portraiture.”  (Fig. 76)  “The Egyptians were not the only ones to adapt the new methods of art to their religious needs. Even in far distant India, the Roman way of telling a story, and of glorifying a hero, was adopted by artists who set themselves the task of illustrating the story of peaceful conquest, the story of Buddha.”  (Fig. 77)

“The humble wall-painting from the Jewish synagogue (Fig. 79) is of interest to us, because similar considerations began to influence art when the Christian religion spread from the East and also took art into its service. When Christian artists were first called to represent the Savior and His apostles it was again the tradition of Greek art which came to their aid.  (Fig. 80)  Figure 80 shows one of the earliest representations of Christ, from the fourth century C.E. Instead of the bearded figure to which we have become accustomed through later illustrations, we see Christ in youthful beauty, enthroned between St. Peter and St. Paul, who look like dignified Greek philosophers.”

Once again, as in Egypt, art was employed for religious purposes and for storytelling and loses its vitality. “Its main purpose was to remind the faithful of one of the examples of God’s mercy and power.”  (Fig. 81)  “These three men seen from in front, looking at the beholder, their hands raised in prayer, seem to show that mankind had begun to concern itself with other things besides earthly beauty. Few artists seemed to care much for what had been the glory of Greek art, its refinement and harmony. Sculptors no longer had the patience to work marble with a chisel, and to treat it with that delicacy and taste which had been the pride of the Greek craftsmen … To a Greek of the time of Praxiteles these works would have looked crude and barbaric. Indeed, the heads are not beautiful by any common standards.”  (Fig. 82)

The loss of sensibility in art indicates the loss of consciousness itself and when the artist as prophet is no longer contained in a story that strives for awareness he loses his connection to truth. And as we know, truth is beauty.