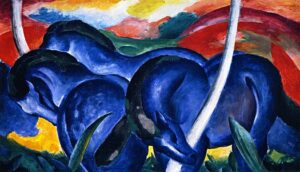 Expressionism emerged in Germany from 1905-1930 and used exaggeration for emotional effect. It is as if these artists had discovered and were trying to express the First Noble Truth of Siddhartha Gautama, namely that, life is suffering. Expressionists subordinated color and composition to the subject matter of the painting, not a return to representing the subject realistically. They believed “the expressive power lay chiefly in the evocative possibilities of the subject and not in the formal elements of the picture.”[i]  For example, in Edvard Munch’s By the Death-Bed (1986) “the linear rhythms of Van Gogh and Gauguin are used to express the anguish of a bereaved family.”[ii]

Nevertheless, the Expressionists were influenced by their knowledge of recent movements away from representational painting. Ernst Kirchner, influenced by the Fauves, used “their juxtaposition of flat planes, of jarring color coupled with a harsh angular line, to lend expressive force to his Seated Woman [1907].”[iii]  Notice that the face of the woman is a sickly yellow color to perhaps illicit sympathy on the part of the viewer.

Expressionists were not only soliciting compassion for their subjects but used their painting to express their own emotions. Oscar Kokoschka’s Portrait of Professor Forel (1910) “reflects as much the artist’s own uncertainty as it reveals the Viennese psychiatrist’s nervousness.”[iv]

The worldview of the Expressionists is worn on their sleeves so to speak in that the emotional expression of their beliefs, attitudes and values is often readily apparent. Georges Rouault was a Roman Catholic and his religious beliefs can be felt in his Christ Mocked by Soldiers (1932). “Extremely devout, he adopted the style of the medieval stained glass used in the great Gothic cathedrals to express his religious views.”[v]  In other words for Rouault, his worldview not only determined his painting style but his identity as well.

Pablo Picasso, among the most adventurous artists of the 20th century, allowed himself to be influenced by whatever movement he found himself immersed in including Expressionism. In his Weeping Woman (1937), the emotions of the artist are dramatically expressed. “The strident color and twisted forms of the painting represent equally the anguish of the woman and the structural requirements of the picture.”[vi]

Willem de Kooning’s emotionally explosive Woman I (1952) is more about his painting technique than it is about a particular woman. “The emotional impact of the image results from the dramatic interplay of paint, line and color rather than from the way human form is depicted.”[vii]

Like many of us the behavior of the Expressionists was as likely to do with distracting themselves from their suffering as it was in expressing themselves as artists.