Stand-Up and Be Counted

What is the difference between genius and stupidity?  Genius has limits!
— Einstein

Comedy is a performance that is humorous in its treatment of theme and character and has a happy ending. A comedy of manners satirizes fashionable society. A satire is a literary work in which human vice or folly is attacked through irony, derision or wit. Irony is the use of words to convey the opposite of their literal meaning or using an expression to create a contrast between apparent and intended meaning. In P-B, a happy ending would only be possible with self-delusion and a denial of reality so there is something inherently tragic underlying most comedy and the lives of many comedians or satirists. The “art” present in the best performers, however, is undeniable. 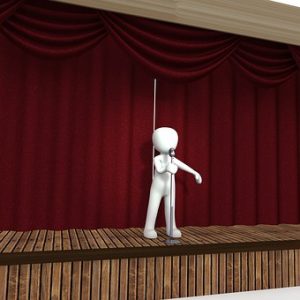 “Good stand-up comedy disrupts the herd thinking, the herd mood, stand-ups being, in the main, cracked romantics and disappointed lovers of mankind. Life for the stand-up is a high truth degraded, and he avenges it with gags and horrible insights that make you go hur-hur-hur. ‘You know when you’re at the bank,’ Louis C. K. says, ‘and you’ve got nothing to do while you’re waiting in line so you just pick people to hate … ‘Uughh, look at his shoes … I hope he dies today, oh God I hate him …’ He’s just standing there, he has no idea you’re just boiling with hate.’ We all know what he’s talking about, that seething, chattering layer of antipathy—road rage for pedestrians. It possesses us. It charms us, even. It has power over us.”  In revealing the monkey-mind of the false self, projecting onto the other and the universal process by which we create suffering, the stand-up can help us gain the insights necessary to realize that it does not have power over us.

The good news is that comedy can be therapeutic and help many of us step back from the edge. Jordan Wieleba during her transition from male to female used her standup skills and passion for comedy to cope with pressures unknown to most of us. “Comedy is not only how I express myself; it’s how I give myself therapy, how I work through things, how I deal with anger issues and depression. It’s always been that way. Standup has become such a relieving outlet for me.”  So, let’s relax and have a laugh or two.

Telling jokes on stage has come a long way since vaudeville. From “standing up” in front of an audience to provoke laughter to a process of therapy for the comedian to confronting an unconscious society in its self-destructive behavior as George Carlin did. The art form is obviously evolving to something more profound than “getting a laugh.”

“[At] more than halfway through her show, Ms. Notaro removed her blazer and shirt and completed her performance naked to the waist, displaying the scars from her double mastectomy.”  None of us would think of denying that there is an art to making people laugh but Tig Notaro clearly had more in mind as she joined those comics who are broadening that art form. There seems to be “a compulsion for comedians to smash through the artifice of comedy and [to] tell the unadorned truth without humor is becoming stronger and stronger.”

One such truth is the presence of racial hatred that prevails in America despite all the so-called remedies over such a long and tortured past. Is the reality that we American’s don’t want to do anything about this egregious treatment of the other? The comedian Jon Stewart thinks so. “Mr. Stewart explained [after one of his performances on “The Daily Show”]. He had no jokes to make. He began to speak with utter earnestness about America’s ‘gaping racial wound that will not heal.’ He added that ‘by acknowledging that, by staring into that and seeing it for what it is’ we still won’t do anything about it. The audience laughed uncomfortably.”  Perhaps Stewart is right in that we are not yet uncomfortable enough with our self-destructive behaviors to do anything about it. History does seem to be telling us that we cannot look to our policy makers for justice and compassion.

“Jokes told in service of signaling a worldview are our primary mode of commentary, and it makes sense that we now take our cues most readily from those who are best at it: Stephen Colbert, Jon Stewart, Sarah Silverman, Chris Rock, Amy Schumer, Louis C. K., Hannibal Buress, Aziz Ansari.”

We expect politicians to pander and can’t trust them to tell the truth even if they know what that is. “A joke, seems uncalculated in its morality; to hear a good one is to feel as though you’re being told the truth. It’s hard to imagine someone who is consistently funny not meaning what she says.”

Comedians have assumed an identity and are playing a role that was formerly the responsibility of journalists and politicians. “Good comedians aren’t furnishing their audiences with an escape hatch, nor are they offering it up as mere amusement. Humor gives them both permission and incentive to examine the world for its flaws, as well as a medium for reporting them back to us.”

Comedian Bob Odenkirk equates good comedy with honesty, a rare commodity in P-B. “Yeah, that’s what comedy is. There are a couple of things wrong with me; some of them I make money off of. Ultimately what we are all doing is trying to turn our psychological problems into a paycheck. You want to be broken in just the right way to make the most amount of money.”  We are all broken and doing the best we can, and we are blessed if we can see the humor in that. We are not blessed if we insist on denying that.

In the current (September 2015) chaotic process of nominating candidates to run for the office of U.S. President the candidates pander to the electorate looking and sounding more like stand-up comedians than statesmen. Perhaps then, it makes sense that our comedians should feel the responsibility to fill the void and begin to sound more like statesmen than comedians. Americans can’t be blamed for taking whatever leadership and whatever honesty they can find wherever they can find it.  And all of us who are advocating for humanity’s awakening need all the help we can get even if it is punctuated by jokes and false-self schtick.