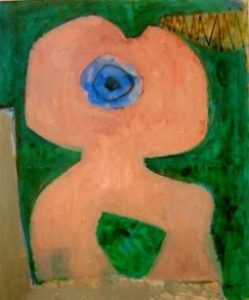 Art exists within and expresses the context that contains it and therefore is much more profound than one might expect from a simplistic definition. “Abstract art is an invitation to imagine, to interpret, to reflect. [It] induces reverie [and] liberates us from the literal and the everyday, and provides a bridge to the realm of the collective unconscious.”[i]

“But it also had historical roots in Europe and colonial appropriation, and coincided with Einstein’s theory of relativity, Saussure’s lectures on structural linguistics, two world wars, the atomic bomb and the breakdown of Western ideas about human subjectivity. It became a Cold War weapon, with the West arguing that abstraction illustrated capitalist ‘freedom,’ while the Eastern Bloc’s figurative Socialist Realism was repressive, just like its political system.”[ii]  You get the idea!

There is little agreement on which of the many characteristics seen in the paintings are most representative. Since the term Abstract Expressionism was first used in 1919 in connection with the Russian painter Wassily Kandinsky let’s will start with him. First and foremost, Abstract Expressionist painters did not want the viewer to see anything “represented” in the painting, it was to be “nonobjective.” Kandinsky’s Softened Construction (1927) exemplifies this goal. “For Kandinsky, the formal structure—the organization of line, color, and space on a flat surface—is inherently expressive and does not require any other frame of reference.”[iii]

The Cubists Picasso and Braque had similar goals in expressing what came to be called “pure art.” Whether they achieved pure art or not, Picasso’s Head (1938) and The Studio (1928) and Braque’s The Portuguese (1911) are definitely departures from the conventional art of their day. “The personality of the artist is ‘invisible,’ the shapes are geometric, and the real subject of the picture is its structure, its design.”[iv]

If the early so-called “pure abstractionists” failed in escaping the presence of representational “form” in their canvases, it was at least a beginning toward that goal. Try as they might their “free-form” shapes did evoke associations with natural objects. “We can see this operating clearly in Jean Arp’s relief, Forest [1916], which suggests a tree and the moon to one so inclined. Once we read the image this way, it becomes extremely difficult to ignore the suggestion and respond to the formal structure.”[v]

Another way to remove the associations with natural objects was to limit shapes to the most simple found in geometry like circles, rectangles and squares. Kazimir Malevich does this in his Suprematist Composition: Red Square and Black Square (1915). “Here we have but two squares set in relation to each other on a white surface.”[vi]

It was Piet Mondrian who had the insight as an abstractionist that came closest to “feeling” the fundamental truth of Simple Reality. He advocated in his art the transcendence of form altogether. “To this end, Mondrian rigidly excluded from his paintings curves, diagonals, and unattached lines as well as impure colors and paint texture as much as he possibly could.”[vii]  His Composition in Black and White and Red (1936) illustrates his method.

In Simple Reality, the goal of The Point of Power Practice is to choose response over reaction and to create the experience of pure feeling, of beauty, in the present moment. Notice how close that description is to the goal of pure abstraction that painter Victor Vasarely aspired to using the rhythmic interplay of his simple geometric shapes in his painting Kalota (1970). “Here as in all pure abstraction, the ideal is an impersonal encounter that will generate an esthetic response without reference to anything outside the work of art.”[viii]  And indeed, there is nothing outside the resplendent work of art we call Creation.

Abstract Expressionism picked up steam after World War II and was related to a large wartime emigration of European artists and poets to the United States and the shift of the center of Western art from Paris to New York. In the painting The Betrothal II (1947) by the Armenian American Arshile Gorky, we can see the use of the Surrealist’s symbol system but there is also the beginning of a major shift in aesthetics. “As we continue to examine the painting, we soon become aware that the forms have little weight or substance. They are clearly drawings, in which line and shape play as important a part as the symbol.”[ix]

It is Jackson Pollack who demonstrates very clearly where Gorky was headed. Pollack avoids both symbolic or representational devices in his so-called “drip painting” entitled Number I (1950). “It is the paint and color alone that engages our interest.”[x]  The Surrealist’s notion of “automatism” seemed to play a role in Pollack’s creative process. In the context of Simple Reality, we could say that in the present moment Pollack had surrendered conscious control to his intuition.

“It was in Jackson Pollock’s ‘all-over’ paintings, however, that the transcendentalist impulse most conspicuously renewed itself in America after the war; and the main catalyst for this was again Kandinsky’s work which was exhibited in depth—a retrospective of more than two hundred paintings and drawings—at the Museum of Non-Objective Art in New York in 1945.”[xi]

“In some of Pollock’s drawings of 1945-6, one sees the turgid, visceral forms of his “totemic” images loosening, becoming airy and scribbly under the Russian’s [Kandinsky’s] influence, expanding into a continuum of signs and graphic flourishes that circle around an imaginary point at the centre of the page and gradually expand towards its edges. This was the origin of Pollock’s ‘all-over’ manner, which has been hailed—not without reason—as the most striking innovation in pictorial space since Picasso’s and Braque’s analytical Cubist paintings of 1911.”[xii]

The most famous of Pollock’s painting styles over the course of his career was called “action painting” or “drip painting.” “I am more at ease. I feel nearer, more a part of the painting, since this way I can walk around it, work from the four sides and literally be in the painting.”[xiii]

“Nobody could deny, after examining the exquisitely tuned surface of a work like Lavender Mist, 1950, with its close harmony of blues, lilac-greys, white, and silver, the degree of Pollock’s control over his risky process. There being so few contrasts of light and dark, the surface became the literal “mist” of its title, a subtly inflected and airy space which, at last, owed nothing to the cubist grid.”[xiv]

One subdivision of abstract expressionism was “color field” painting. “The idea of the surface as a ‘field’ rather than a ‘composition,’ overwhelming the eye with one main color, would become a big issue in 1960s painting and sculpture—though usually a pedantic, or at least professorial one.”[xv]

“On the other hand, Clyfford Still, Mark Rothko and Barnett Newman relied on the large fields of colour to produce solemn and elevated effects. These three painters made up the ‘theological’ side of Abstract Expressionism. For all his interest in archetype and anima, his study of Kandinsky and his concern for invocatory ritual (echoed physically in the ‘dance’ of creation around the edges of the canvas on the studio floor), Pollack made no metaphysical claims for his art.”[xvi]

“From the beginning he opposed the Cubist tradition of small size and ambiguous space. What [Clifford] Still wanted, and had found by 1947, was a simpler and more declarative kind of structure: opaque, ragged planes of colour rearing up the surface like cliffs and peaks, emphatic in brushwork and engulfing in their sheer size. Virtually no modernist paintings done before 1945 look like his, and even the influence of Surrealism is less apparent on Still than anywhere else in Abstract Expressionism. His career thus gives us an impression of hell-fire conviction and straightness. Finding his style early, he stuck to it for more than thirty years with only minor variations.”[xviii]

Mark Rothko wanted to eliminate as many references to the world outside of his paintings as possible in order that he could be in direct communication with the viewer. “His ideal viewer should not approach the work with any preconceptions about art.”[xix]  It is as if he wanted to bypass the intellect of the viewer and address the viewers “feelings” directly. Rothko clearly distrusted human reason even to the point of using purely descriptive titles in his work such as Brown and Black on Plum (1958).

“The most complete painter in the ‘theological’ wing of the New York School was undoubtedly Mark Rothko. He, too, painted to the large ‘American’ scale, but for different reasons than either Still’s or Newman’s, because (he said): ‘I want to be very intimate and human. To paint a small picture is to place yourself outside your experience, to look upon an experience as a stereopticon view or with a reducing glass. However you paint the larger picture, you are in it. It isn’t something you command.”[xx]

“His formula, which he established in 1949 and repeated with minor variations until his suicide in 1970, was a series of colour rectangles, soft-edged and palpitant of surface, stacked vertically up the canvas; often the divisions and intervals between them suggest a horizon or a cloud-bank, thus indirectly locating the image in the domain of landscape. This format enabled him to eliminate nearly everything from his work except the spatial suggestions and emotive power of his colour, and the breathing intensity of the surfaces, which he built up in the most concentrated way, staining the canvas like watercolor paper and then scumbling it with repeated skins of overpainting, so that in such Rothko’s as Ochre and Red on Red, 1954, one seems to be peering into depths of mist or water, lit from within.”[xxi]

“Every artist after 1960 who challenged the restrictions of painting and sculpture and believed that all of life was open to art is indebted to Rauschenberg.”[xxii]

“An afternoon’s stroll in downtown Manhattan could and did furnish him with a complete ‘palette’ of things to make art with: cardboard cartons, broken striped barber-poles, sea-tar, a mangy stuffed bird, a broken umbrella, discarded tires, a shaving mirror, old postcards. ‘I actually had a kind of house rule. If I walked completely around the block and didn’t find enough to work with, I could take one other block and walk around it in any direction—but that was it. The works had to look at least as interesting as anything that was going on outside the window.’ Rauschenberg did not want to interfere too much with the objects; he was intrigued by their ‘given’ quality.”[xxiii]

“Rauschenberg’s discovery of a stuffed angora goat in the window of a Manhattan store that sold second-hand typewriters—was of some autobiographical meaning, since as a child in Port Arthur [Texas] he had a pet goat whose death, at the hands of his father, scarified him emotionally. The goat was therefore able to take its place with the other creatures that populate Rauschenberg’s combines, the eagle, the chicken, and so forth, as a mute emissary from Eden—a survivor of Nature in a flood of Culture, an innocent witness to events before the Fall.”[xxiv]

Abstract Expressionists expressed the same desire in their art as most of us do in our lives in general which is to experience consciously the Eden, the “Heaven on Earth” that we knew before we “fell” into the unconscious experience of P-B and the very unsatisfactory identity of our false self.