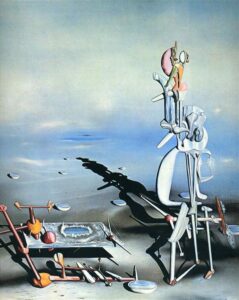 Jean Arp (1886-1966), a Dada leader said, “Dada wished to destroy the hoaxes of reason and to discover an unreasoned order.”[i]  Arp and his fellow-travelers suspected as we do today that “the creature that reasons” is far from rational. “Dadaists wanted to shock and outrage the middle class with their irrational and offensive art. Kurt Schwitters and Marcel Duchamp utilized materials taken from our everyday world which, by being ‘dissociated’ from their usual contexts, were supposed to upset our notions of artistic propriety.”[ii]

Instead, the suffering, distraction-hungry public embraced the opportunity to escape the mundane context of P-B—any excuse to avoid taking responsibility for their self-destructive behaviors would suffice. Few of us today would find Kurt Schwitters’ Mit Kerze offensive.

Dada failed in its mission lasting only a decade and was followed by the Surrealists led by Andre Breton. Obviously influenced by Freud, the Surrealists focused on the psychological meanings of their art returning to realistic techniques. “This was done to depict ‘dream images,’ which would present ‘the real functioning of the mind.’   They retained the Dadaist idea of dissociation as they explored the content of the subconscious states of mind.”[iii]

For example, Paul Klee’s The Mask with Little Flag (1925)  “depends heavily on the artist’s psychological associations for its effectiveness. These private meanings were allowed to determine the image without conscious control on Klee’s part.”[iv]  Max Ernst was another Surrealist who used a technique that did not require conscious control. He rubbed charcoal over paper placed on rough-grained surfaces and then used the resulting patterns to create his paintings. His Phases of the Night (1946) is an example of using this technique.

Joan Miró used “automatic” painting or drawing approaching his canvas without any preconceived ideas allowing his hand to move freely over the surface. As in Figures and Dog in Front of the Sun (1949), images would emerge and he would select those that had symbolic value for emphasis. We, the viewer, don’t have to know anything about the symbols imbedded in the work to appreciate the painting’s aesthetic value.

It was fellow Catalan Joan Miró who introduced Salvador Dali to the other Surrealists in Paris. Dali’s rise to fame can only be described as meteoric. As Dawn Ades, who curated a Dali retrospective in Venice in 2005 put it, he became by 1933 “Surrealism’s most exotic and prominent figure.”[v]  Dali’s spectacular career continued for most of the remaining 20th century although many critics had doubts about the quality of his later work.

Michael Taylor, curator of the Philadelphia Museum of Art has no doubts about Dali’s artistic genius. “Dali should be ranked with Picasso and Matisse as one of the three greatest painters of the 20th century.”[vi]  Dali’s Still Life—Fast Moving (1956) shows what Taylor is talking about—an example of what Dali called his Nuclear Mysticism.

Dada and Surrealism – Table of Contents