To obtain financial support artists often found that they had to create works that were used for religious and political purposes. In other words, art was enlisted in the support of the false self and Paradigm-B. In Paradigm-A, truth and beauty are the goals of artistic self-expression. In the early history of art, in P-B, beauty was only incidental—a secondary outcome if you will—of artistic self-expression. Art in service of the state or the church was as old as the false self and therefore began possibly with the art on the walls of the pyramids.

Certainly, it had developed into an “art” during the time of the Roman Empire when “theatre for the masses” was taking place in the Coliseum. Over 50,000 people flooded through the 80 arches for drama on a grand scale. As many as 10,000 gladiators and 11,000 animals “performed” in one day. And on the same day the arena was flooded for a mock naval battle. Artificial mountains and forests were created where hunters killed wild animals or were killed by them. All in the name of the sensation energy center of the false self. Try as it may, Las Vegas will never equal the escapist illusion of the staged spectacles of ancient Rome.

Let’s continue with perhaps the all-time big spender in the annals of art as political propaganda—the Sun King himself (1638-1715)—the representative of God on earth. “The deification of Louis XIV was a full-time project for an army of artists, musicians, writers and poets in 17th century Versailles. “As he is of rank superior to all other men, he sees things more perfectly than they do, and he ought to trust rather to the inner light than to information which reaches him from the outside.”[i]  Louis’ inner light was probably not an authentic experience of the present moment, but no one was in a position to argue with his “enlightened” judgment.

Powerful political leaders would even use war as an excuse to add to their prestigious art collections which were then used to impress and mesmerize not only the masses but other rulers of competing nation states. “In 1648, Queen Christina of Sweden sent her army against Emperor Rudolph I at Prague, admonishing her generals to ‘take good care to send me the library and works of art that are there: for you know that they are the only things for which I care.’”[ii] Not until the 19th century were royal collections seen as national patrimony instead of the personal property of the kings and queens, czars and emperors. 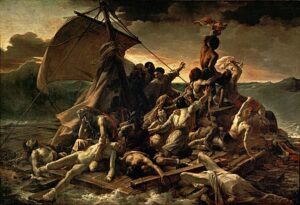 Now let’s turn to art used in the service of so-called democratic governments and/or social reformers. A scandal occurred in 19th century France that gave painter Jean Louis Gericault (1791-1824) a propaganda opportunity, this time as an artist attacking rather than supporting the power elite. The incident in question involved the captain of a sinking passenger ship cutting the lines connecting the lifeboats to a raft thereby dooming the lower-class passengers. In preparation for his famous painting Raft of the Medusa, Gericault built a prototype raft and made 110 preliminary drawings. He visited the Paris morgue to view putrefying limbs and heads of dead criminals—all in the name of realism. This was not only a powerful piece of propaganda but the “most significant change in subject matter in the first half of the 19th century.”[iii]

With the 1815 downfall of Napoleon “the shift of focus to humanity and its suffering and joys produced a new humane art.”[iv]  The rise of the middle-class patron, more accessible media outlets for the increasingly literate European populace and the ideas of the enlightenment all contributed to this new artistic expression. Art in the service of compassion and social justice was art that everyone could relate to.

Ferdinand Delacroix (1798-1863) painted Liberty Leading the People and placed himself in the action wearing a top hat (although he was not actually there). The painting depicts the 1830 overthrow of Charles X who was replaced by Louis Philippe. The boy retrieving ammunition from dead soldiers while looking up at “liberty” communicates the transfer of allegiance from a leader to a principle.

No artist of the 19th century delivered as powerful or telling blows to the waning power of the oligarchs than Honoré Daumier (1808-1879). Daumier’s Rue Transonain shows government troops slaughtering workers and their families in the tenements on April 15, 1834. This was a common occurrence in Paris during this period of revolutionary unrest.

Now for the shift from the revolution in art relating to religion and politics to that of the revolution in art itself. “The imperative of independent artists after 1885 was to explore deliberately the expressive possibilities of the materials of art themselves, such as line, shape, color and surface organization.”[vi]

Artists such as Paul Gauguin (1848-1903) searched unwittingly for a way out of the unsatisfactory “emotional” life and a way to enter the more satisfactory life of “feeling.” “Whereas the impressionists might argue in defense of his painting, ‘This is how I see it,’ Gauguin would very likely argue that he was painting the look of emotion, or ‘This is how I feel it.’”[vii]

One definition of the goal of meditation is to experience reality as it really is. In light of that definition we could say that the Dutch painter Piet Mondrian (1872-1944) was meditating in front of his canvas in search of the present moment. “Mondrian believed this type of painting was important for humanity because it presented in purified artistic form a model of equilibrium, a condition imperfectly experienced in nature but eternally sought in all forms of life. Seeing as the painter’s task the expression of a vision of reality. Mondrian desired the purest expression of life through the feeling [emphasis added] of color, rhythm, and form from their particularized appearance in nature.”[viii]

Mondrian gave a lot of thought to the purpose of art, arriving at a concrete conclusion that revealed aspects of P-B. “His writings show a growing distrust of modern materialism, science, organized religion and illusionistic art—all of which he came to regard as impediments to free expression of the human spirit.”[ix]

Few artists entered into the creative process with as much energy and movement as did Jackson Pollock (1912-1956) in his “action painting.” “When I am in my painting, I’m not aware of what I’m doing … the painting has a life of its own … it is pure harmony, an easy give and take, and the painting comes out well.”[x]  Pollock was able to experience the “flow” or “feeling” of P-A.

And finally, we close this essay with the artistic vision of Henri Matisse (1869-1954). “Matisse liberated drawing and color from the specific properties of objects so that they in turn could release his feelings of joy and serve his expression in art. Matisse dreamed of an art having balance, purity, and serenity.”[xi]   These metaphysical qualities have a higher reality than that of the senses. It is precisely these qualities that characterize P-A and also the experience of living in the present moment. It is that transcendent reality that art can connect us to because after all—art is truth and truth is beauty.