Life beats down and crushes the soul and art reminds you that you have one.
Stella Adler 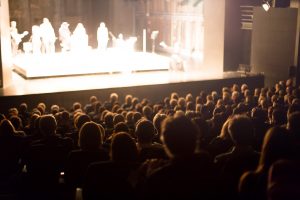 Shakespeare revealed that he had thought of this “life-as-theatre analogy” in his “all the world’s a stage.” We are but actors indeed with less latitude in playing our part than most of us understand. Our freedom in interpreting our character is not restricted by a tyrannical director, but rather the fact that we have, at birth, entered onto the stage of an ongoing drama and as King Lear said, “we cry that we are come to this great stage of fools.” We also have been handed a script that our fellow actors insist we follow. In fact, it is our fellow actors who zealously teach us how to act our part and mete out subtle and not-so-subtle sanctions if we resist.

Our innate human psychological structure exerts an unconscious influence on the fundamental expression of our character’s role. That is one of the things we have in common with our fellow players. We will express a good deal of energy, like all of the other occupants of our stage, in the acquisition of material wealth, power and pleasure. This is a play, after all, about worldly success and triumph, pomp and circumstance if you will.

Our character will also experience an undercurrent of existential fear that can be temporarily avoided through myriad distractions but at other times will take over our melodramatic role in periods of abject suffering and terror. Despite our character’s massive or modest acquisitions, impressive attainment of worldly power or life of self-indulgence at the banquet of earthly pleasures, peace, happiness, freedom and satisfaction remain inexplicably illusive. Our character experiences life, scene after scene, act after act, despite heroic generosity or selfish indulgence, as a bewildering and sometimes pointless suffering.

We will have wonderful moments, to be sure, as our character’s true nature surfaces in spontaneous moments of compassion and joy. But, make no mistake, my fellow thespians, this is a dark play made all the more ominous by the seemingly irrational chaos and violence that we can hear going on backstage but cannot see behind the piles of onstage debris and scenery that obscures the future.

Through some miracle beyond explanation, a few of us will experience an epiphany. We will suddenly realize that we are onstage in a theatre and that our behavior is only part of our self-delusion—the “play” is not what it seems. We can choose to wake up as if from a dream, we can let our script float to the floor as we stride offstage, and push through the stage-door, and step out into the sunlight. The sun is bright and warm, the air crisp and fresh, the sounds lilting and melodic, and all about us will be a vivid “realness” absent from our experience onstage. Free from script, directors and actors, we realize that we can write our own play at this point. Beyond any notions of having, doing and knowing we are playwright, director and actor in our own self-created drama, written with a transcendent awareness that happiness is our character’s natural state and compassion our only true source of energy. We have entered upon the stage of infinite possibilities beyond any limitations.

All the World’s a Stage

Why is the theatre a perfect metaphor for demonstrating the difference between P-B and Simple Reality? In P-B one is caught up in playing a role in an illusionary “drama.” The play only seems to be “real life.” The context for the story is created in the world of form, unsubstantial, rickety props on a slippery stage. The script provides for each character their role or identity which they express in reaction to the other characters on the stage. On this stage we have indecisive Hamlets, Medeas seeking revenge, and a bewildered Oedipus caught up in self-destructive forces beyond their control behind every cardboard tree. This play, with most of humanity “hamming it up,” doing their best to upstage their fellow actors, is more than tragic, it is worse than irrational it is utter madness.

To escape the tragedy unfolding on the stage of the global village we must enter the present moment, we must walk off the stage into the wings and become the observer of the P-B drama including our own identification with the body, emotions and mind of our false-self driven character. From the wings we are detached from the illusion happening on stage and gain sufficient distance from our character’s (our false self’s) identity, that we can begin to distinguish illusion from reality.

There is no question that the audience can benefit from their role as observers. Since our false self has a lot in common with those false-selves on the stage a character’s persona often hits close to home. “Melodrama does not prevail merely because it keeps us on the edge of our seats; by its use the fires that rage in our bosoms, the rats that gnaw at our brains, are brought on stage to be faced and, just possibly, faced down.” What theatre critic, Robert Hatch may be talking about is that whether we are watching a Greek tragedy or theatre of the absurd, “Oedipus at Colonus” or “Waiting for Godot,” we can experience revealing insights and/or catharsis.

Why is it that one runs to one’s ruin? Why has destruction such a fascination?
Oscar Wilde

Oscar Wilde, a socially and economically advantaged genius, came hard up against reality when he was sentenced to two years of hard labor in a series of brutal English prisons for “gross indecency.” He was able to remain conscious enough throughout his ordeal to learn what he called “humility.” His definition of humility was “the frank acceptance of all experience.” In order to survive in prison we can see from his own words that Wilde was able to make the distinction between reaction and response.

The history of the theatre has had significant moments of transformation as have all of the arts. We can give credit to a couple of extraordinary artists who were responsible for that transformation. Frank Magill introduces us to Ben Johnson (1573-1637): “Although he regarded his dramatic work as merely one facet of his literary life, he was determined that the playwright should receive the esteemed title of ‘poet.’ In the Elizabethan era, plays were regarded as unimportant public amusements; satires, sonnets, and narrative verse were expected to carry the heavy freight of ideas and art. Johnson worked to establish drama as a legitimate literary form by showing that it could be a conscious art with rules of organization that were as valid as those of more esteemed literary genres.”

As a youth of seven, Miguel de Cervantes (1547-1616) had witnessed a puppet show at a local fair. “Forever after, the theater was to seem to him the truest reflection of nature—a symbol of life itself, wherein every man must choose his part and play it, giving meaning to his life through his dedication  to his role.”

The American playwright August Wilson (1945-2005) understood the power of theatre to create awareness. Although Wilson wrote an extraordinary series of 10 plays about the African-American experience in the 20th century, he also knew the challenge was to create a sustainable American narrative that included all Americans. “Wilson returned to the Hill District [in 1963 to Pittsburgh where he was born] and began to meet other black writers. With fellow writer Rob Penney he formed the Black Horizon Theatre, hoping to raise consciousness through theatre.” We have got to be united and come together before we can proceed on, into this 21st century.

Having done that, we can then from the objective position of the NOW, begin to write our own role, within our own script and thereby transform our behavior. We will then have become masters of our own fate, creating our own reality because we will then realize that we were born into a tragedy not of our own making which bears little resemblance to the more profound reality of P-A. This authentic human “drama” is a story filled with joy and compassion; the glorious theatre, the friendly universe, wherein we can all give Oscar-worthy, heartfelt performances.

Coming together is what Simple Reality is all about. Nowhere will that process find greater support than in the world of the theatre which has always and will continue to reflect back to us our current state of consciousness, our self-destructive behaviors and the peace and freedom that awaits us when we awaken. Break a leg my friend. We all await your performance.