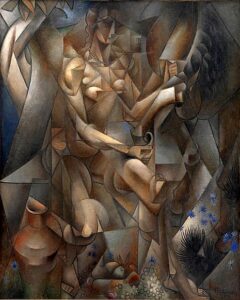 Reality is the beginning not the end.
–Wallace Stevens

Cubism was created by Georges Braque and Pablo Picasso in early 20th century Paris and involved the reduction and fragmentation of natural forms into abstract and often geometric structures. “Pablo Picasso’s Les Demoiselles d’ Avignon [1907] is generally credited with triggering the visual revolution that came to be known as Cubism.”[i]  The central artistic idea came from Cezanne who advised artists to see in nature the cylinder, the sphere and the cone which meant that Cubism had a geometric organization.

The depiction of conventional reality was completely done away with in Cubism. “In his collage Head [1938], Picasso put together a number of torn pieces of paper, over which he drew a few lines to produce a very handsome visual experience.”[ii]  Picasso and Braque were on their way toward complete abstraction.

Braque’s The Portuguese (1911) suggests that reality has only symbolic value. “The painting’s occasional details, such as the rope in the upper right or the guitar hole in the lower center, reinforce the irrelevance of reality instead of the reverse.”[iii]