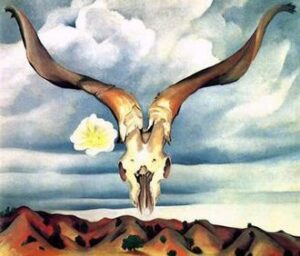 As our artists remain true to their heartfelt vision, truth and beauty proceed toward awakening hand in hand.

Eakins was a staunch defender of truth, and mostly misunderstood.  Hopper approached the world and the process of painting with his intellect and because of this he had a decidedly dark worldview.  He captured not only his life but also an aspect of the American soul. His paintings speak as eloquently as Cervantes, Shakespeare or Goethe that life is suffering.

O’Keeffe had the courage to trust her own intuition, paint only what she wanted to paint.  But ultimately she had to flee the stifling jungle for the clean, refreshing air of the desert.  “Kahlo’s art was described as “a ribbon tied around a bomb.”  Unfortunately she was mostly reliant on others for love and esteem, which created enormous suffering.

Wyeth had the courage to communicate in his paintings an aspect of reality that is foundational to Self-realization.  He art was a “metaphor for the fragility of life.”  His work suggests violence “that often simmers beneath the surface of daily life.”  His goal was to paint “emotion into objects.”

Lowry is for tribal sovereign rights but against the destruction that comes with it.  Sovereignty is an illusion in the global village.  The Simple Reality Project proposes that Oneness is the only sustainable reality.