Television became popular in the 1950s. 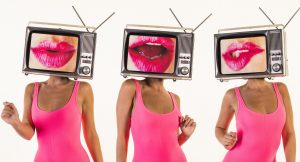 It was the primary medium for influencing public opinion.  Color was added in the mid 1960s and by 2013 79% of the world’s households owned a TV.

Pop art “… was done to the people. It grew by analogy to what it admired, advertising and the media through which advertisements were replicated. And it grew dandyistically, casting itself in the role of the detached, amused, lenient, but inflexibly ironic spectator at the vast theatre of desire and illusion which the mass media of the twentieth century had erected. By far the most powerful of these was television [emphasis added].”