Words are symbols of experience;
a photograph convinces us it is experience itself.
— Anonymous

French photographer Henri Cartier-Bresson (1908-2004) begins our effort to try to understand just exactly what photography as an art form is capable of. “Of all the means of expression, photography is the only one that fixes forever the precise and transitory instant. We photographers deal in things which are continually vanishing, and when they have vanished, there is no contrivance on earth which can make them come back again. We cannot develop and print a memory.”[i]  As a Westerner, Cartier-Bresson was struggling with an insight which Siddhartha Gautama had been very clear about, namely that all of life is transitory, all of the material world is impermanent.

All artists in a sense are projecting their own identity onto their work. Objectivity in the creative process is impossible. “In a deeper sense, the instant is crucial, for photography is an instrument for truth, and it reveals who is behind the camera even more mercilessly than who or what is in front of it.”[ii]

American photographer Edward Weston (1886-1958) addresses insights related to Oneness but expressed it according to his own unique experience. “How little the subject matter counts in the ultimate reaction! If there is any symbolism in my work, it can only be in a very broad consideration of life, the seeing of parts, fragments, as universal symbols, the understanding of relativity everywhere. All basic forms are so closely related as to be visually equivalent. I have had a [human] back (before close inspection) taken for a pear, knees for shell forms, a squash for a flower, and rocks for almost everything imaginable!”[iii]

Why are so many people today enamored of cell phone photography? “Edward Weston came to the conclusion that photography is the most pure and direct means of expression man has yet found: conception and realization occur almost simultaneously, and the artist, undeterred by the slow and clumsy hand, is limited only by his own capacity to create.”[iv] 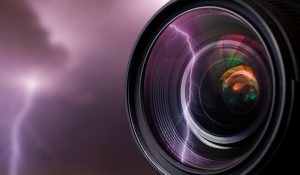 Not only is the insight of Oneness felt in creating images but the distinction between reaction and response, between emotion and feeling can be experienced in the art of photography. Photographing clouds, American photographer Alfred Stieglitz (1864-1946) had a decidedly subjective response. “What he had done in this series which he called ‘Equivalents’ was to crystallize what usually remains in the unconscious, felt rather than known [emphasis added]. He proved that the photographer works with connotations as a poet does with words, that in intensifying, penetrating, transforming, expanding, compressing our visual connotations, he works with light and time as the musicians does with sound and time.”[v]

Creativity requires awareness, it is experiencing beauty, and it is training the eye to see beauty. A photographer focusing on “seeing” beauty might see things that the rest of us won’t. “On a day like this [it’s raining] you might see red, yellow, or green traffic lights reflected on a wet pavement. You might see raindrops running down a window pane or hanging from a railing or overhead wire.”[vi]

In the present moment, which is our natural state of being, we can all see and experience beauty, but that ability is too often obstructed by our being in reaction, that is to say, not present. Like awareness itself, creativity is something to be revealed by being in response to our experience.

The process of Creation is being present in order that the good, the true and the beautiful may come forth naturally and then we express it by singing, painting or simply “seeing” it. The false self is incapable of the “feeling” response because it is always in a “reactive” state thereby blocking the experience of Simple Reality.

Cartier-Bresson said “that camera work should be non-conceptual, that good images resonate at the core of our being, and that the artificial and contrived are deadly. Thinking should be done beforehand and afterword—never while actually taking a photograph. Success depends on the extent of one’s general culture [paradigm], on one’s set of values, one’s clarity of mind and vivacity.”[vii]

Meditation has a key role in the creative process in that it clears away the illusion of P-B which blocks spontaneous creativity and “artistry arises from the mind’s natural wakefulness, creativity, and humor when the obstacles that obscure it are cleared away. This is the main point of the whole contemplative endeavor.”[viii]

The experience of the creative process in the present moment can be transformative as American photographer Dorothea Lange (1895-1965) realized. “The camera is an instrument that teaches people how to see without a camera.”[ix]  Everyone with a cell phone or smart phone these days is also a photographer with an opportunity to learn how to truly see where they are which has profound implications as to who they are.

In a sense we are all “composing” our lives according to not so much what we see but how we feel about what we see. British photographer Julia Margaret Cameron (1815-1879) talks about composing and personal sensibility. “When focusing and coming to something on the ground glass which, to my eye, was extremely beautiful, I stopped there.”[x]  Photographer Edward Weston summed up what many artists with a camera feel: “Composition is the strongest way of seeing.”[xi]

A gyre is a system of ocean currents that swirl in a massive circuit, picking up debris from one coast and depositing it on other shores or simply circulating it in an ever-widening vortex. Rebecca Hale’s photograph of a cell phone, plastic toy gun and cowboy and a pile of varicolored fishnets can zero in on the small role we all play in creating a whirlpool of ocean pollution the size of New Jersey. Photos can shock us into a realization of both the truth and the beauty of what we can create or what we can lose.

“Pam Longobardi [b. 1958] is an artist—and a trash collector. Pieces of carefully tagged plastic debris she’s picked up from coasts around the world fill her Atlanta, Georgia, studio.”[xii]  That’s what artists do. They transform the ugly into the beautiful and at the same time provoke changes in human behavior.

Nigerian photographer Jonas Benediksen (b. 1977) shows construction workers in overalls standing on rocks overlooking a beach thronged with bathers. “‘All these construction workers would come around and watch life at the beach, but none of them would sit on the sand.’ Said Benediksen, ‘I think they felt somehow that they didn’t belong.’”[xiii]

The division, the uncrossable gap between the workers and those enjoying their leisure at the beach, symbolizes the growing worldwide chasm between the haves and have-nots, a poignant but ominous visual image. For example, the beach in Dubai is hundreds of miles away from the workers’ homes and families in places like Vietnam and India. The workers make up the majority of Dubai’s population; they work 12 to 15-hour shifts to maximize their earnings which is sent home to support their families.

Photographic images like those of Benediksen’s expose the reality of human suffering but do they help create genuine compassion on the part of the viewer? Can we begin to experience the distinction between illusion and reality? “Strand had long desired to make the portrait of a whole town; his Italian collaborator, the film scenarist Cesare Zavattini, suggest Luzzara, where he had been born and knew everybody. Strand found it the perfect town, basic, unpicturesque, alive. ‘It is one thing to photograph people; it is another to make others care about them by revealing the core of their humanness.’”[xiv]

American photographer Paul Strand (1890-1976) had been able to capture with his camera the True-self of the people of Luzzara; and our being able to see the universality of the human struggle is an important step toward creating a sustainable human community.

Is it possible that art can bring about a synthesis? Can a sense of the truth of Oneness be created during the creative process, a paradigm shift, and a change of identity? Cartier-Bresson seemed to think so. “I believe that, through the act of living, the discovery of oneself is made concurrently with the discovery of the world around us. A balance must be established between these two worlds—the one inside us and the one outside us. As the result of a constant reciprocal process, both these worlds come to form a single one.”[xv]