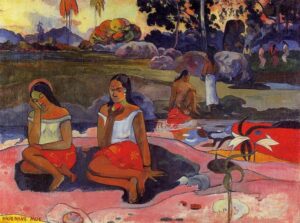 “The avante-garde view, which forms the basis of what is usually called ‘modern art,’ began in the period immediately following the heyday of Impressionism—roughly in the 1880’s. At about this time, the various concerns of modern art first emerged in what is now called Post-Impressionism. In one way or another, all artists involved in the development of modern art were grounded in the theories of light and color associated with Impressionism. But the same artists rejected the Impressionists’ insistence on an immediate response to nature. In their different ways, the Post-Impressionists interposed some sort of structure between nature and their picture. Their work presented an organized view of reality, expressed mainly in a self-conscious use of design elements.”[i]

In a word, an “organized view of reality” is simply a worldview.  All of humanity is immersed within worldviews that vary greatly. The key question regarding a given worldview is how close does it resemble the truth? How close a correspondence exists between our worldview and actual reality? Art can help us answer these questions.

Seurat was indeed very self-conscious in his use of design elements in his paintings and used a scientific or intellectual approach (sacrificing intuition to intellect) to express his worldview at the expense of beauty as it turned out. For example, in his Bridge at Courbevoie (1887) “he imposed on the Impressionist’s relatively intuitive palette a highly systematized concept of color relationships based on scientific theories of optics and artistic cannons of beauty.”[ii]

Seurat was interested in the science of color, but Van Gogh had a different aim. “He heightened color and distorted form in order to produce a more intensely emotional response in the viewer.”[iii]  We can see this in Van Gogh’s Portrait of Dr. Gachet (1890) where the intense red of the table is meant to intensify the adjacent blues.

An emotional response from the viewer was also the goal of Gauguin and he cared little for the actual color and shape of the things he painted. In his Seascape in Brittany (1886) “we can see the extreme flattening of forms and space that is to become a central feature of modern art, a tendency already visible in Van Gogh and Seurat.”[iv]

In Degas’ dancers, the most famous being Little Dancer Aged Fourteen (1878), we see one of his favorite subjects, but his main focus was “the play of line and color across the surface”[v]  of his paintings depicting ballet dancers. The same was true of Monet’s Water Lilies Series [1890’s] but he added the surface texture of his brushwork to create “a visual excitement that reinforces the effect gained by the use of color.”[vi]

And finally, we can also see in Cezanne’s Mont Sainte-Victoire (1904), a similar surface texture on an agitated surface intended to heighten visual excitement along with the unusual way that color and line are related. “Both elements are used to produce space and volume through the relationship of planes to the flat surface of the picture.”[vii]