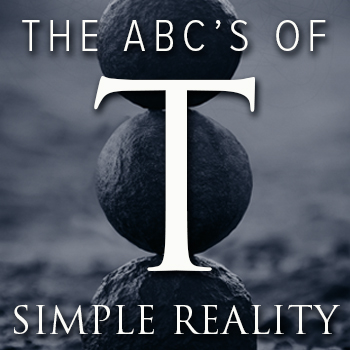 There is no secret Truth,
only truths we refuse to acknowledge.
Truth undermines the self
to which we so desperately cling.
The Truth is hot hidden from us.
We are hiding from it.
Reb Yerachmiel Ben Yisrael

This article is short to make the point that the truth (P-A) is deceptively simple; it’s the illusion (P-B) that is complex.

The pursuit of truth and beauty is a sphere of
activity in which we are permitted to remain
children all of our lives.
Albert Einstein

“The great point to be noted, in the teaching of Jesus, is His statement of the absolute liberty of the individual. That was the subject of His first discourse in the synagogue of Nazareth (Luke iv. 16); He continued His teaching with the statement, ‘the truth shall make you free’; and He finished it with the final declaration before Pilate, that He had come into the world to the end that He should bear witness to the Truth (John xviii. 37). Thus, to teach us the knowledge of Liberating Truth was the beginning, the middle, and the end of the great work which the Master set before Him.”

It is the intellect that depends upon imagination and belief to create its worldview. The intellectual understanding of truth is one thing—an experience of truth—that is, feeling truth, is quite another.  Rollo May makes the critical distinction between the truth experienced when we respond to life and the illusion produced by reacting to or resisting our experience of life. “Truth becomes reality only as the individual produces it in action, which includes producing it in his own experience.”

David Hawkins has, to say the least, an unorthodox method of measuring the truth but few mystics would argue with his results. “Any experience of ‘reality’ to the list [below] are coming only from belief systems with no independent, actual existence in Reality. They have no substantive, independent existence; they all depend solely on imagination and belief.”  The person living in the context of Simple Reality will have the experience listed under “Reality.”

Because profound truth such as P-A is ultimately “felt” and not understood intellectually we can often look to artists to demonstrate what truth is. We all understand that a poem’s power to move us cannot be analyzed but it is simply “heartfelt.” The art of Francisco Goya, both his paintings and etchings demonstrate his power to portray the historical and human truth of his times. His art is a scathing indictment of P-B. The following paragraph in Masterpieces of Western Art edited by Ingo F. Walther, describes how Goya put truth above all else in his art.

“The greatest and most terrifying examples of an almost obsessive quest for truth can be found in the works of Goya. Not only in his portraits—including the Spanish royal family—but also, most notably, in his series of prints Caprichos, Disparates, the bull-fighting scenes of his Tauromachia, the Proverbios and the Desastres de la Guerra. The brutality of the Inquisition, the horrors of the Napoleonic wars, the cruelty of ancient rites are not objective reports of injustice observed or experienced, but depictions that overstep the bounds of specific, cynical social criticism, lighting the path of a self-destructive obsession that drives him to look, see and understand. Truth no longer appears in the guise of allegory or mythology. It is neither noble nor fine, but merely inescapable.”

Penetrating so many secrets, we cease to believe in the unknowable. But there it sits, nevertheless, calmly licking its chops.
H. L. Mencken

The absence of truth in P-B can be maddeningly frustrating. Denial is the chief weapon used to forestall facing the truth and denial readily morphs into cowardice. Cowards in denial are ubiquitous in the halls of Congress. Trapped like cockroaches in a darkened maze of their own creation, they flee in panic at the first flicker of light. They cannot stand the glare of the truth. We continue the war on drugs as our example because it is a long-standing lie and therefore particularly insidious.

It is the year 2011 and members of Congress debate and agonize over one of the greatest failings in American political history. Longer than any other of our failed wars, and we have had several of late, even politicians are beginning to squirm for fear the populace might wake up and direct light into this dark corner concealing unmentionable ugliness.

Two government reports and outside experts speak the following disturbing facts which in turn point to bigger truths. “The reports specifically criticize the growing use of U.S. contractors, which were paid more than $3 billion to train local prosecutors and police, to help eradicate fields of coca, operate surveillance equipment and otherwise battle the widening drug trade in Latin America in the past five years.”

Reading between the lines, which is not all that hard, we can see that the truth is the following: People who have financial interests in various enterprises and who want to make money hire lobbyists to influence votes, promise lucrative future jobs for the politicians or their family and or friends, contribute money to election campaigns which also buys accessibility to politicians for them and their lobbyists. It is in the interest of these thousands of people that the war on drugs grows and does not end. Whether it is successful or not is quite beside the point.

“‘We are wasting tax dollars and throwing money at a problem without even knowing what we are getting in return,’ said Sen. Claire McCaskill, D-Mo., who chairs the Senate subcommittee that wrote one of the reports.” Truth starts to emerge and then comes the lie which for more than a decade has overpowered the truth. The truth, you see, is not profitable. “Administration officials strongly deny that U.S. efforts have failed to reduce drug production or smuggling.” Why shouldn’t we believe the administration? “The Obama administration is unable to show that the billions of dollars spent in the war on drugs have significantly stemmed the flow of illegal narcotics into the U.S.”

We have heard this same type of denial from every president going back to the Reagan administration. We Americans are paying to create our own suffering because it makes us too uncomfortable to acknowledge what is happening. Washington policies and behaviors, after all, are a reflection of the choice made by Americans to avoid the truth.

Let us feast on wisdom and take care not to grow fat on illusion.