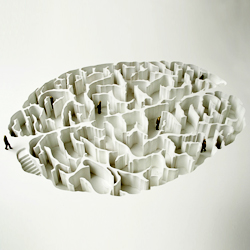 A metaphor that corresponds to the dilemma humanity faces in the context of P-B is the maze. Most of us, at times at least, feel as if our lives seem to be a confusing and intricate labyrinth in which we have lost our way. That’s because we have.

At the beginning of the last century, writer and social activist Jack London was not optimistic about the prospects of humanity finding its way out of its maze. “A million years ago, the cave man, without tools, with a small brain, and with nothing but the strength of his body, managed to feed his wife and children, so that through him the race survived. You on the other hand, armed with all the modern means of production, multiplying the productive capacity of the cave man a million times—you are incompetents and muddlers, you are unable to secure to millions even the paltry amount of bread that would sustain their physical life. You have mismanaged the world, and it shall be taken from you.”

He doesn’t mince words does he? If London is correct we had better get serious about finding our way to freedom instead of continuing to experience the confusion and frustration of choosing blind alleys time and again. First, we have to believe two things. One, that indeed we are lost in a maze; and two, that there is another alternative, that we have a choice. Elsewhere in this Simple Reality project we used the example of Harriet Tubman leading hundreds of slaves to freedom along the Underground Railroad. She remarked that she could have led more slaves to freedom if she could have convinced them that free territory existed and that they could trust her to take them there.

Perhaps we could find a modern-day Harriet Tubman. We need to realize, however, that humanity throughout its history has rejected many Harriet Tubmans. We don’t know how convincingly this American heroine made her case in the dark of night in the Deep South but we do know something about a couple of trustworthy would-be guides who made very good arguments indeed. Their guidance is still available and it’s clear that they knew the way out of the maze, but so far we have elected to remain lost and enslaved within our own unbelieving minds, turning our backs on the chance for freedom.

We will take time to briefly revisit two of the most famous mystics in human history and their stories of P-A, the land of freedom. But first the inevitable question has probably occurred to you. How did we get into this maze in the first place? The answer, like the answer to all of our questions, is available to those who know both where and how to look. Let’s go back to the beginning of our story in the Judeo-Christian West—back to paradise—back to the time before we became ensnared in the labyrinth. Adam and Eve (that’s us) lived a perfect life as a couple of innocents. Of what were they innocent? The Old Testament tells us they were without knowledge of good and evil. Knowledge! Ah Ha! Now we’re getting somewhere. Adam and Eve were not stupid. They simply didn’t need to know anything. Everything was provided for them.

The metaphorical story in the book of Genesis involves telling humanity that over-reliance on the intellect, on knowledge, takes us out of the present moment. Only in the Now can we experience the perfection of Creation. Finding ourselves “East of Eden,” which is where we still are, we began to construct our maze, our survival strategy. Brick by brick we added to our labyrinth-like worldview in pursuit of plenty, pleasure and power. At the same time as we took the world of form and our bodies, our minds and our emotions to be reality, we were constructing our identity. As Wordsworth made clear, we were “giving our hearts away.”

As we moved more deeply into our self-constructed maze, our reactive conditioning became more complex and our ability to respond to life more unlikely. Today we do not know where we are. We do not know who we are and we do not know how to behave to lessen our fear and suffering. Ok! Now it’s time to revisit our two rescuers and see if this time we can believe and trust them.

The myth of Siddhartha Guatama has the same metaphors as Genesis. Because they are universal stories both are, in fact, contained within each human being as a natural internal source of wisdom. Siddhartha’s paradise is his “father’s” palace rather than the Biblical heavenly “Father’s” garden found in Genesis. The knowledge that spoils his perfect serenity is not the knowledge of good and evil but the equivalent knowledge of aging, death and disease. He wants to know why humanity is subjected to suffering. He wants to know the way out of the maze.

We all know the details of the story so let’s cut to the chase. After being led about for six years by many bogus wise-guys he realized that he could not believe and trust that those self-styled gurus knew the path out of the labyrinth—and indeed they did not. It was time to abandon the intellect and turn to his intuition—the path with a heart—the path revealed by his still small voice within.

Turning away from the world of form and toward the ancient practice of meditation, he went within and began to observe his own nature. It was time for both self-knowledge and self-reliance. He began to believe and to trust himself. When he arose from his meditation he was awake in the present moment. What had he experienced? Note that we didn’t ask what he had learned. We asked what he had experienced and this distinction is critically important.

We can look upon Siddhartha as a scientist because he conducted an experiment and corroborated the results by replicating them again and again (the scientific method).  We could also consider him the father of psychology because he saw more deeply into the dynamics of human behavior than even modern psychologists do today.

After discovering the answers to his questions, he taught these critically important insights to his followers for over 45 years. However humanity as a whole was not ready to wake up, not ready to leave the maze. His wisdom is little understood today and the path he mapped out of the maze is seldom followed. Perhaps some of us are ready to revisit those insights—not Buddhism the religion—but Siddhartha’s profound insights relating to the maze.

The first insight that Siddhartha experienced (and the first principle of Simple Reality) was that of Oneness.  This makes sense because we have learned that the context or story is the place to start if we are to be successful in negotiating the maze.

Next, receiving guidance from his innate wisdom, he intently watched his body, mind and emotional reactions and found that they had nothing to do with his true identity. He became the observer of his own false-self survival strategy and had his next insight: Identifying with his survival strategy was the source of his suffering. He observed that the craving and aversion created by his pursuit of plenty, pleasure and power—or put another way, that the activities of having, knowing and doing—were certain to be unsatisfactory. He had discovered the structure of the maze, what it was made of, and most importantly that he had constructed it himself and could therefore dismantle it himself, brick by conditioned brick.

At this point we will diverge from classical Buddhist teachings, if we haven’t already, and conclude Siddhartha’s path to freedom from the enslavement of the labyrinth. Remember, we are not required to conform to any definitions of knowledge outside of our own wisdom. We are all capable of self–reliance. We all intuitively know the way out of the maze. But the way out of the maze discovered by Siddhartha will be so shocking, so contrary to our understanding of reality, that it will probably be rejected by all those still contained in the context of P-B. Most of us will choose the familiarity of slavery rather than believe in and trust the unfamiliar whispers of our still, small voice coming to us in the silence and solitude which occasionally punctuate the frenetic madness of our conditioned habits.

We find the doctrine of impermanence in the Hindu-Buddhist tradition with the inevitable realization that the world of form is insubstantial and when deeply experienced will be found to be an illusion. When Siddhartha’s Great Insight or Right View is combined with his identity as the observer and the inescapable unity with the Creator as the One observer expressing through each of us, then impermanence rounds out the final solution to the maze. There is no maze unless we create it, support the illusion with our reactions and keep the fantasy alive with our energy. Don’t underestimate this good news because now we also know that aging, death and disease are also illusions. We have been free all along which brings us to our second mystic who has a different way of expressing what Siddhartha “the Awakened One” discovered.

Jesus of Nazareth was not a scientist like Siddhartha and depended on his followers to distinguish feeling from emotion and on their ability to subordinate their intellects to their intuition. He was very successful in making his appeal directly to the heart. As a consequence his message, his gospel, was very simple.

The Fall for Adam and Eve was the descent into the unconsciousness of P-B. The fundamental reality of the perfection of Creation did not change—they did. Jesus arrived at the same basic truth regarding the maze that Siddhartha had before him. It exists only in the unconscious mind of humanity. He said “The Kingdom of Heaven is spread upon the earth but they do not experience it.” Instead they experience their own delusions, their feverish pursuit of plenty, pleasure and power.

We are all familiar with Jesus’ statements regarding the importance of Oneness. “I and the Father are one.” There is no separate ego. The separate personality is a human creation supported by the P-B narrative which in turn determines the delusional identity which drives our self-destructive, conditioned, reactive behavior.

Jesus took away the maze as the sun dissolves the mist—in a direct and simple pronouncement. “The kingdom of heaven is here and now.” Our false self may be lost and bewildered, experiencing pain and suffering but when we relax and breathe, become calm and respond with compassion, the True self is always there, calmly waiting with unshakeable assurance. He also arrived at a simple message which tells us that we are here to express compassion pure and simple. “Love thy neighbor as thyself and God the Father [Creation] with all thy mind, body and spirit.”

Those of us fed up with living in the maze can step forward, breathe, relax and let our true identity surface. We can embrace the good news. We can begin to shift our beliefs, attitudes and values as they become attuned to Simple Reality. We were made for this. We are the heroic destroyer of mazes, not lab rats.

References and notes are available for this essay.
Find a much more in-depth discussion in books by Roy Charles Henry:
Where Am I?  The First Great Question Concerning the Nature of Reality.
Simple Reality: The Key to Serenity and Survival