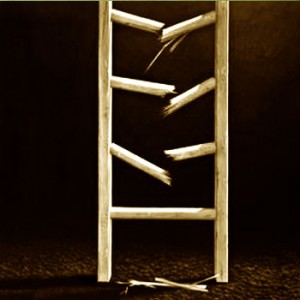 The source of humanity’s existential fear, which is the fundamental cause of human suffering in the global community, is the threat of chaos. In other words we believe that we live in an unfriendly universe and bad things can happen to us at any moment.

That worldview is not the only possibility however. We can climb out of that dark hole into the sunshine of a friendly, non-threatening universe if we so choose. Let us examine a few ladders that can get us out of P-B and see if one appeals to us. The ladders we are going to “test” in this essay will be that of a religious mythical metaphor; secondly, a ladder discovered by the intellect in the world of science; and finally, the mystics’ ladder. Which ladder(s) will empower humanity to transcend the fear of chaos? Remember though, it’s important to have our ladder against the right wall or when we get to the top, there will be nothing there.

What is the origin of the human belief in chaos? Hesiod was the first Greek speculative thinker to use Chaos in his account of the birth of the world. “According to this story—variants and elaborations of which are also found in the so-called Orphic theogonies of the sixth and early fifth centuries B.C.—once heaven and Earth had been separated, the dark and windy chasm of Chaos was transformed through the appearance of Eros, into the background against which the world was created.”

How does humanity find answers in Greek mythology that will ease our anxiety about our beliefs in chaos in the world of form, in the heavens and on earth? “The gross anthropomorphism of mythical cosmogonies make such questions unanswerable.”

The ancient philosophers did not provide humanity any comfort regarding our existential anxiety regarding the apparent surrounding chaos. “The end of Greek philosophy was historically preceded by the bankruptcy of philosophical cosmologies. Henceforth, all important cosmological theories were to be found in the mathematical and astronomical studies of the Alexandrian and early Christian scientists. A remarriage between cosmology and philosophy was not affected before the sixteenth and seventeenth centuries.”  As is the case today, early western civilization paid too much attention to their thinkers (intellectuals) and too little to their poets (intuitives).

In the Old Testament, Jacob is the patriarch of the book of Genesis. “And he dreamed, and beheld a ladder set up on the earth, and the top of it reached to heaven: and behold the Lord stood above it.” (Genesis 28: 10-19) “In modern allusion, the ladder from heaven to earth symbolizes the communion of man with the Divine.”

Communion and contemplation are closely related to the idea found in Simple Reality of making one’s life a meditation or continually choosing response over reaction. Christians would call this the state of union with God.

A transcendent state free of the anxiety of the illusion of chaos would fuse all authentic transformative practices into one. In his book, Open Heart, Open Mind, Cistercian priest, monk and abbot, Father Thomas Keating, put it this way: “These three acts—discursive meditation, affective prayer and contemplation—might all take place during the same period of prayer. They were interwoven one into the other. Like the angels ascending and descending on Jacob’s ladder, one’s attention was expected to go up and down the ladder of consciousness.”

Thomas Keating’s understanding of how to live in the present moment is atypical of how most Christians practice their religion. The Christian worldview, as we saw in the chapter on religion in the third book of the Simple Reality Trilogy, tends to be more of an obstacle in transcending the anxiety associated with a belief in chaos. A metaphorical interpretation of Jacob’s ladder would show that his dream revealed a human longing for a transformation in consciousness. Ascending the ladder of awareness would enable humanity to transcend the illusion of chaos. Without a change in worldview and identity the faithful of the world’s religions will not be able to ascend Jacob’s ladder.

The Second Ladder: Science and the Intellect

In Jacob Bronowski’s The Ascent of Man, he has humanity ascending the ladder of scientific exploration and invention. This “Jacob” and his ladder are very different from the ladder found in religious mythology and firmly grounded in the realm of physical form, at least on the lower rungs. The discoveries of such scientists as Copernicus, Galileo and Darwin effectively cause humanity to abandon the Jacob’s ladder found in Genesis and to start the ascent of the ladder of science with the energy provided by the human intellect.

The Church ceased to be the center of humanity’s universe when the earth ceased to be the center of the cosmos. A new story had to be written to accommodate the new evidence that scientists were discovering. The most important of those discoveries in the 19th century was Charles Darwin’s theory of evolution by natural selection. He wrote and published his book The Origin of Species in 1859.

The first rung on the ladder that our scientist “Jacob” is inviting us to climb is paleontology but the next rung is chemistry. It is Louis Pasteur in the 1860’s who invites us to keep climbing this ladder. “For the first time Pasteur had linked all the forms of life with one kind of chemical structure. From that powerful thought it follows that we must be able to link evolution with chemistry.”

Max Planck adds the third rung with a theory published in Germany in 1900. His conception was not fully appreciated at the time but students of Simple Reality will appreciate the lift we get from this rung. Planck said that all matter consisted of units or clumps energy he called “quanta.”

The fourth rung lifts us high enough to catch our first glimpse into the realm of particle physics and to meet the most outstanding experimental physicist of the early 20th century, Ernest Rutherford. Building on the 300-year-old model of Copernicus and Galileo, Rutherford proposed a new model for the atom in 1911. “He said that the bulk of the atom is in a heavy nucleus or core at the center, and the electrons circle it on orbiting paths, the way that the planets circle the sun.”

Each of our scientists, as we are seeing, builds on the work, the theories and the models that came before. Niels Bohr now takes the model of the Rutherford atom and Planck’s quantum and publishes his synthesis in a paper entitled “On the Constitution of Atoms and Molecules.” Atoms are invisible but what can be seen is the spectrum of each element. “Bohr explained them each as a release of energy when the single element in the hydrogen atom jumps from one of the outer orbits to one of the inner orbits.”

We are beginning to see that all the steps on this ladder are related and that evolution is the climbing of the ladder step by step from simple to complex. “The atoms form molecules, the molecules form bases, the bases direct the formation of amino acids, the amino acids form proteins and proteins work in cells. The cells make up first of all the simple animals, then sophisticated ones, climbing step by step.”

It was Max Born who when approaching the top of the ladder of science, saw in the distance that the clouds were clearing revealing a key realization. “I am convinced that theoretical physics is actual philosophy.”  He was right because the branch of philosophy that investigates the nature of ultimate reality is metaphysics. It was Aristotle who saw the need to transcend the study of the world of form. Following his treatise on physics he wrote Ta meta ta phusika, “the things after the physics.”

Werner Heisenberg will take us to the next rung of the ladder of science, the Principle of Uncertainty. The Encyclopedia of Philosophy sums up the implication of the Uncertainty Principle which, of course, is not accepted by all scientists some of whom remain enchanted by the world of form, the process of reductionism and their own intellects. “Therefore, it becomes a reasonable possibility that particles are, ontologically, always in partially defined states; that they do not in any sense that is scientifically respectable and philosophically intelligible have both a precise position and an exact energy.”

We leave the ladder of science now which has many rungs to go but we can see that the world of form is infinitely complex and always in a state of flux and that the intellect will always be in a state of uncertainty as long as it derives its identity from the world “out there.” Or as Jacob Bronowski sums it up: “The Principle of Uncertainty fixed once for all the realization that all knowledge is limited.”  Precisely!

We are all Jacob on the third ladder, searching for that broadening vista that will empower us to distinguish illusion from Simple Reality. The third ladder transcends the illusion of both the ladders of religion and that of science. We can peer over the wall surrounding the Garden of Eden and see Adam and Eve soundly asleep experiencing the anxiety-filled nightmares of the unconscious. We can see the ladder of science fading into infinity with a futile seeking of a non-existent tangible reality.

Several cosmologists have of late recanted their theories of a dark hole in outer space gobbling up the universe. That’s good! Because as we climb the ladder of consciousness, we will come to realize that the physical world of form is to the awakened person an illusion. We will then be finished with ladder climbing all together. Aware of the perfection of Simple Reality, we have stopped the seeking, the searching. All that remains is the celebration of the life we have been given.