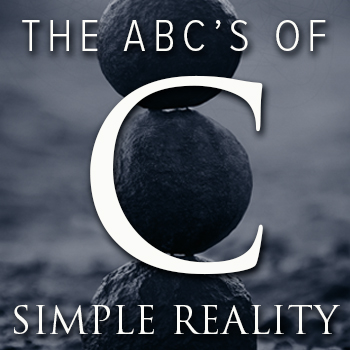 Humankind is engaged in a universal striving, without most of us being aware of it, the struggle to become conscious. The dictionary defines that state as:

From the Latin, conscious: com, together + scire, to know. Having an awareness of one’s own existence, sensations, and thoughts and of one’s environment. Subjectively known or felt. Aware.

Most of us would say from that definition that we are already conscious but that is exactly the problem, we are not conscious enough to realize that we are unconscious. We are conscious of the self but not the Self.

The entire thrust of Self-realization comes from a seeking of “awareness.” All of the energy of humanity individually and collectively, consciously or unconsciously, drives us to wake up. It is the “purpose” of life—it is the answer to the Great Question, Why Am I Here? We are here to become CONSCIOUS. Obviously as contemplatives, we mean something much more than the pedestrian meaning of being “conscious.” The awareness that we are seeking is transcendent and takes us into a realm of consciousness beyond striving and suffering, a wondrous realm indeed.

Jungian psychologist Edward Edinger, further defines what being truly conscious would be. “We can proceed further by examining the unconscious side of the term consciousness, namely its etymology. Conscious derives from con or cum, meaning ‘with’ or ‘together,’ and scire, ‘to know’ or ‘to see.’ It has the same derivation as conscience. Thus the root meaning of both consciousness and conscience is ‘knowing with’ or ‘seeing with’ an ‘other.’ In contrast, the word science, which also derives from scire, means simple knowing, i.e., knowing without ‘witness.’ So etymology indicates that the phenomena of consciousness and conscience are somehow related and that the experience of consciousness is made up of two factors—‘knowing’ and ‘witness.’ In other words, consciousness is the experience of knowing together with an other, that is, in a setting of two-ness.”  Again, to keep the focus where it belongs, the “setting” is one of two-ness in a relative sense but Oneness in the Absolute or awakened state. Therefore, true consciousness would lead us to a realization of Oneness.

Consciousness then, is created by the union of opposites or making them whole.  “The coniunctio of opposites is not generally a pleasant process. More often it is felt as a crucifixion. Consciousness is the third thing that emerges out of the conflict of two-ness. Out of the ego as subject versus the ego as object; [the primary dualism in Ken Wilber’s ‘spectrum of consciousness’ found in this book under the article Spiritual Path.] out of the ego as active agent versus the ego as passive victim; out of the ego as praiseworthy and good versus the ego as damnable and bad; out of a conflict of mutually exclusive duties—out of all such paralyzing conflicts can emerge the third, transcendent condition which is a new quantum of consciousness. The Trinity refers psychologically to the creation of consciousness. Father and Son, like God and man, are opposites which collide on the cross. The Holy Spirit as the reconciling third emerges from that collision proceeding from the Father and the Son. Thus the Holy Spirit (Paraclete) [counselor or comforter] can only come after the death of the Son, i.e., consciousness comes as the fruit of the conflict of twoness. Therefore Christ could say, It is to your advantage that I go away, for if I do not go away, the Counselor will not come to you; but if I go I will send him to you. And when he comes, he will convince the world of sin and of righteousness and of judgement [the opposites and their resolution]. John 16: 7-8, RSV.”

At the risk of becoming too metaphysical we must let Ken Wilber express his profound insight. “But since consciousness is Reality, and Reality is actually non-dual, it would be much more accurate to view consciousness not as relative subject confronting objects but as Absolute Subjectivity above the dualism of subjects vs. object.”

Eckhart Tolle has a fresh perspective and an always unique way of visualizing key concepts like consciousness. “Just as water can be a solid, liquid, or gaseous, consciousness can be seen to be ‘frozen’ as physical matter, ‘liquid’ as mind and thought, or formless as pure consciousness.”

William Irwin Thompson returns our focus to Oneness. “From the esoteric point of view, it is not really appropriate to look at one’s body as the singular form of one’s incarnation; we all take our incarnation in the natural history of the planet, so the planet is actually part of our subtle body. It make no sense to talk about life or the evolution of consciousness unless one is talking about planetary dynamics and the unfolding of the entire story of our Earth.”

As we have seen the Bible when understood consciously also supports Oneness as the only profound worldview as does the Vedanta of Hinduism.  “Personality is presented in all its giantism, and yet it is personality that must be offered up, sacrificed to and for the divine. ‘Let the Seer slay reality, then slay the slayer’ is an aphorism of the yogic seer Patanjali. This sacrifice of the personality through and with the personal is something we will encounter again when we consider the Bhagavad Gita, in which Krishna encourages Arjuna to carry on with the battle and not seek to escape the conflict in the quietistic nihilism of the world-denying sanyasin. It is only through the personal that the personality is transformed. Samson without his strength and sexuality is not Samson; without them, there would be no story at all.”

We all have within us insights awaiting our return to an awakened state so they can emerge into our consciousness as both Peter Russell and David Lorimer experienced. “Many mystics have reported an experience in which consciousness is not bound by space and time.”

“Consciousness is not an object: it is the ultimate subject: The Self is the knower (thou art that), never the known (the object). It is ultimately unknowable precisely because it is the Knower.”

“We are caught up in a consciousness that can no longer distinguish completely between illusion and reality. Thus we live in a hazy, imaginary reality and suffer from that. We begin to recognize our self-created experience of reality for what it is: an illusion. At the same time, it gives us insight into reality and allows us to experience its qualities, which are none other than the qualities of our fundamental humaneness.”

Are we aware of what’s happening in our country and the world at large? What most of us think we know is in fact the creation of the unconscious false self and that behavior is self-destructive. We hear about trigger locks on weapons stored in our houses so our children won’t kill us or each other. Or a community in Idaho passing a law making it illegal to not own a gun so that in the words of the mayor, “we will be safe.”  Or the creation of a missile defense system to protect us against an enemy that we have unconsciously created and provoked. The answer is paradoxically, yes and no.

The awareness comes and goes and when it gets too uncomfortable we repress it and call upon our various strategies for  coping with the darker realities of life. When we turn on the evening news and we feel relief when the tragedy we see is unfolding in another continent (earthquake) or another country (civil war) or another region (a flood) or another city (serial killer) or another neighborhood (drive-by shooting) we may feel Schadenfreude, the embarrassing (ashamed) reaction of relief when something bad happens to someone else instead of us. This nightmare is the result of an unconscious humanity.

Continuing to grasp the experience being truly conscious we turn to the wisdom of the eastern mystics. “Mind assumes three states of consciousness—waking, dreaming, and dreamless sleep. I am the witness thereof, remaining aloof from all these states, for I am transcendental consciousness. The blissful Self am I, experienced by transcending the senses, the mind, the intellect, and the ego. I am Brahman.”  Bhagavata Purana VI. iv.

We know we are making progress with our practice of choosing response over reaction when we have the insight that only that which never changes is real. “This changeless Reality is pure consciousness.”  “It is Sat-Chit-Ananda (Being-Consciousness-Bliss) in which there is not even the slightest trace of the I thought. This is also called Mouna (Silence) or Atma (Self). That is the only thing that is.”  Raman Maharshi.

Simply put, the equanimity or bliss we all seek is found in the awareness of the present moment. That is consciousness.