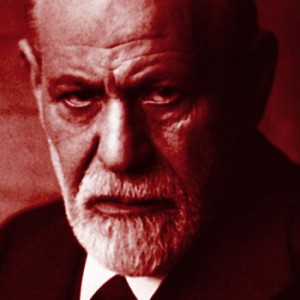 By elevating the status of the intellect from a servant “below stairs” to that of master of the manor we have plunged the management of the human estate into chaos. All of our human institutions are impotent from lack of the leadership of our intuitive wisdom and the connection to the implicate order, the source of that profound guidance which is available in the present moment where the proper relationship of intellect as the servant of intuition is restored.

Take the example of the brilliant intellect-driven Sigmund Freud (1856-1939) author of The Interpretation of Dreams (1901) a “masterpiece of psychological interpretation.” What the intellect tends to do is elaborate and complicate, dazzle and obscure. The field of science as a whole has often been a history of reductionism which is an example of ever more complex constructs and theories which has ultimately left humanity peering at a fading mirage. Waves or particles or neither or something else?

In Freud’s case, his model is indeed an impressive tour de force of the intellect, but is it based on reality and is it practical in its application? The question that has to be asked of practitioners of Freudian psychoanalysis is: Has it been able to move humanity from neurosis toward reality? The answer after a century of practice is clearly—No!  In fact like all solutions that are not profound, they become the problem because they have us believe we are making progress and thus distract us from considering solutions that will effectively address human anxiety.

Let’s consider the problem of existential anxiety or neurosis. Neurosis can be defined as “Fear of the id or any of various functional disorders of the mind or emotions involving anxiety, phobias or other abnormal behavior. Neurotic anxiety is aroused by a perception of danger from the instincts (id).” How, for example, does Simple Reality address this problem?

By profoundly changing the human context, neuroses are simply transcended. We know that sounds too good to be true but this entire book is devoted to supporting that new paradigm and the related human identity and behavior. First, we use Insight meditation to stop identifying with the inherent illusions of body, mind and emotions. Our identity shifts from that of object to subject, to that of the observer. Both Eastern and Western mysticism and meditation practice provide ample support for our ability to do this.

Having transcended the source of human neuroses, the false self survival strategy, beginning the process of reconditioning our behaviors associated with craving and aversion using the Point of Power Practice, and shifting our very definition of reality (from P-B to P-A), we have the concrete and undeniable experience of feeling (response) replacing our afflictive emotions (reactions). We begin to live more and more in the narrative of Simple Reality and no longer feel threatened by the id which has no substantial reality or phobias which are imaginary products of the mind and the old story which we no longer identify with. We are gaining control of our emotional reactions through the simple process of operant conditioning (behavior modification). And finally we have come to understand that the body and the five senses that used to form the basis of our concept of reality is now characterized by impermanence, a fleeting illusion that has its role to play in the relative story, not the Absolute context of Simple Reality.

In the paradigm of Simple Reality we have been able to give profound answers to the Three Great Questions. Where am I? Who am I? Why am I here? In doing so, we find ourselves at peace in the Universe, free from existential suffering, living a joy-filled life with compassion for all of Creation. This is in contrast to, “Freud’s contribution [which] is more to the realm of the philosophic than to the scientific …Through his own self analysis, however, he revealed to the world a mind so brilliant and complex that legions of analysts follow respectfully, if not blindly, in his footsteps.” Enough said!