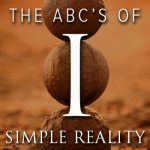 The true nature of anything is the highest it can become.
— Aristotle

Where we think we are determines who we think we are.  We must be highly motivated, clear and focused in our dialogue about the importance of changing our worldview because we know that it determines our individual and collective identity/identities. At birth it is as though we are handed a script that has us acting a role, reading the lines of a fairytale character. We are expected to conform to that role and dutifully read our lines in response to the other characters on the P-B stage. The penalty of failing to play our part exactly as written can be harsh.

The goal of Simple Reality as a “program” is designed to change human behavior, to go “off script,” and since it is our identity that drives our behavior, it follows that understanding the dynamics of identity is critically important. To that end, we consult many insightful people who have thought deeply about the relationship between behavior and identity.

Our identity is our destiny.
— Roy Charles Henry

Identity is the experience of oneself in relation to the world. Our identity is our destiny because it determines our behavior. The process of building a survival strategy, the fruitless pursuit of security, sensation and power, results from who we “think” we are, not the result of who we really are, as we shall see. As Sakyong Rinpoche states so clearly: “Running around trying to alleviate our suffering obscures our true nature—basic goodness—which is clear and unchanging. The wisdom and love beneath the clutter of negativity are natural and permanent.”[i]

How does P-B in general dictate our identity? The self tries to align the forms of the outside world with the self-image. Starting with the parents, then other family and community members, peers and on out to the surrounding culture in general, we seek to align our identity with the exterior “reality.” A great deal of energy will be expended to accomplish this and failure to do so can lead to maladjustment and despair.

Many of us will experience the illusion that we have created a successful adjustment to life in P-B, but over time it will ultimately be unsustainable and unsatisfactory. Jungian analyst, Dr. Edward Edinger, sheds light on this interesting relationship between illusory satisfaction in P-B and a more profound identity. “It is possible to be related, indeed lovingly related, to a particular religion, church or religious community without being contained in it. Containment is an unconscious phenomenon of psychic identification. One can be contained in a religion just as one can be contained in a family or other collective group. One then has no individual living relation to the numinous archetypes. Relatedness to religion, however, means connecting with it out of one’s individual numinous experience. In the latter case we have not a community of believers, but rather a community of knowers, or better, a community of individuals, each of whom is a carrier of the living experience of the Self.”[ii]  An experience of what we call the True self is the “feeling” experienced in the present moment. Therefore, a conventional P-B identity must be transcended in order to “attain the highest that we can become.”

Once again let’s look at the self-destructive nature of materialism or identifying with “things” (security) or status (power) in our community. Robert Powell was referring to this when he wrote: “Thus, the discovery of what one is must mean the very opposite of fostering one’s sense of belonging, because it is a return to a state of total aloneness or Nothingness and thereby the destruction of all security.”[iii] The only true freedom and the related Self-reliance comes from ceasing to identify with the false-self energy centers and putting out the fire of our old conditioning (the craving of security, sensation and power) by refusing to feed it any longer.

Attaining a profound identity is less a process of getting something as it is getting rid of something—dis-identification. During the process of Vipassana (Insight) meditation we are taught to dis-identify with emotions, thoughts and the body (bodily sensations). As challenging as that is, we still have to further dis-identify with the ego (no “I”), all form (everything is impermanent) and ultimately with suffering. Suffering, of course, exists but we must accept life as it is and in doing so transcend the ever-present “unsatisfactoriness” of life. In a profound meditation practice we will become the observer of all of our reactions and thus attain freedom from all craving and aversion.

The next two paragraphs which are duplicated in the articles on fear, identity, meditation and response and reaction, focus on the principle of Oneness and how what appear to be separate subjects are, in fact, each a part of a whole. Even the act of separating these articles in this encyclopedia is a division of Simple Reality that is contrived and supports the illusion of P-B.

The reason that we must not identify with the mind, body and emotions, for example, is because it is through them that we express fear and this expression is the reaction that is the root cause of human suffering. It is through the practice of meditation that we begin developing the awareness that will allow our new identity to emerge.

What often happens during sitting meditation and what makes this practice so difficult for a beginner, is identifying with body, mind and emotions. When we identify with our body we create the suffering associated with aches, pains, itches and all other physical sensations “pleasant” or “unpleasant.” All sensations are suffering because they become the occasion for craving and aversion. When we identify with the mind we subject ourselves to the suffering of our compulsive, neurotic and endless fear-driven storyline. When we identify with our emotions, we are in an almost constant reactive state characterized by fear, anger, jealousy, paranoia, and on and on ad infinitum. It requires a strong commitment to sit (in meditation) through these experiences but the payoff is worth it.

A shift in identity is possible during meditation as we become the “observer” of our experience and stop identifying with the body, mind and emotions. Becoming the observer is an example of response instead of reaction. Creating consciousness (awareness) in this way leads to enhanced authentic power and freedom. This higher level of awareness has many practical benefits such as dealing with phobias as described by Edinger: “The ability to turn an unconscious complex which has one by the throat into an object of knowledge is an extremely important aspect for increasing consciousness. It is as though one who was fighting for his life in the arena were magically transported to the position of spectator—desperate reality becomes an image for contemplation, and the subject as “knower” is removed from harm.”[iv]

Transcending P-B is the result of a profound meditation practice and should be the ultimate goal of any meditation, regardless of what intermediate benefits are realized. To stop a meditation practice before a “shift” to an observer consciousness is attained, before a new identity is realized, is to abort our journey before the destination is reached.

The teachings of all sages emphasize the importance of shifting identities and experiencing reality in the context of that new perspective. Jesus said to his disciples in Chapter 95 in the Acts of John: “A mirror am I to thee that perceives me.”  Edward Edinger explains that “In this text, Jesus is instructing the disciples how to separate subject from object, how to perceive experience as a mirror that provides an image of meaning rather than as chaotic anguish. This corresponds to active imagination or meditative reflection [response] which can turn an oppressive mood [reaction] into an object of knowledge by discovering the meaningful image embedded in the mood.”[v]  What Edinger is describing here is, in fact, The Point of Power Practice.

This is perhaps the most challenging of the profound teachings of the mystics regarding identity. There is no “me,” no separate identity that we commonly think of as the human personality. There is not even an “ego” around which the human personality is constellated in P-B. All of this is part of the ultimate illusion of the deluded human mind which as we have learned has no substantial reality. “‘No self. No problem,’ said the Buddhist Master when asked to explain the deeper meaning of Buddhism.”[vi]  Intuiting the principle of no “I” Marcus Aurelius understood that “in a little time thou wilt be nobody and nowhere.”[vii]

Deepak Chopra shows, in the evolution of his seven stages of identity, how our answer to the question Who Am I? can change.

True freedom can only be possible when we internalize the truth that we are not an ephemeral human body, mind or an emotion-driven animal. We are pure energy, indestructible and existing in the eternal NOW, beyond the confines of time and space. Jesus, speaking in A Course in Miracles says, “no trace remains of dreams of spite of which you dance to death’s thin melody … and then the Voice is gone, no longer to take form but to return to the eternal Formlessness of God.”[ix]

To know men is to be wise;
to know oneself is to be illumined.
— Lao-Tsu

We are pure energy, beyond suffering and anxiety. That is our true identity.

Find more on Simple Reality on this blog and in published books by Roy Charles Henry.