P.S. It’s Happening Again – Can You Believe It? 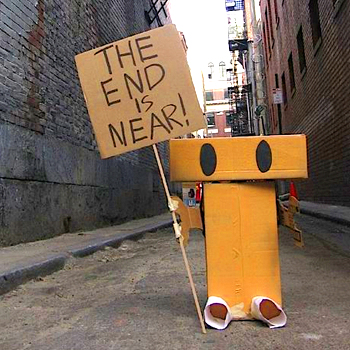 Most of us spend our lives fleeing the fear and suffering that accompanies our life of conditioned reactions to our afflictive emotions in P-B. Trying to escape those unpleasant consequences is not necessary and in fact, not possible. It would be desirable, however, to find the courage to face our self-created dragons and experience the wonderful realization that we can choose victory over defeat, and liberation from our false self behaviors.

The “End Times” phenomena is part of the survival strategy related to the common human behavior of trying to escape responsibility for our decisions or, in effect, not wanting to become Self-reliant. This is also called the Peter Pan phenomenon of not wanting to grow up.

As I write this addendum several years after I wrote the essay Texas Hold ‘Em Or Playing Poker In the Universe, it is Thursday May 19, 2011 and the world is going to end on Saturday May 21 according to Harold Egbert Camping the 89-yer-old announced on his Family Radio website. He last picked a day in September 1994 as “Judgment Day” (the “End Times”) and later explained his mistake as a mathematical miscalculation.

Reporter Electa Draper explains what will happen this coming Saturday. “The rapture entails God plucking up true believers into heaven. Camping’s followers, whose numbers aren’t known, estimate this will include about 3 percent of the world population, roughly 207 million.”

Although I personally have little anxiety over this imminent event there are many people who think that it is only a matter of time when what Camping describes will happen. A belief in Judgment Day and the return of the Messiah is part of mainstream Christianity. “A 2010 Pew Research Center poll found that 41 percent of Americans believe Jesus will return within the next 40 years.”

Doug Weaver of Baylor University says that “During times when natural disasters abound, or when the financial picture is particularly bleak, forecasts of the Rapture are more likely to surface.”  Fear and stress obviously present more opportunities for charlatans. “The Rapture is a moneymaker, Weaver said, inspiring enough books, movies and toys to sink Noah’s ark.”

“News outlets have reported that the faithful have dropped out of school, quit their jobs or blown their savings…. Camping is still spreading the word through Family Radio’s 140 stations. He says that while he is the network’s president and general manager, Jesus is chief executive.”

In his article “The Enduring Appeal of the Apocalypse” in The Wall Street Journal, Michael Shermer explains the rapture phenomenon this way: “For human beings, it is much easier to suffer the slings and arrows of outrageous fortune when we believe it is all a part of a deeper, unfolding plan….We want to feel that no matter how chaotic, oppressive or evil the world may be, all will be made right in the end.”

Believing in the “Rapture” is only one of the many forms of the “great escape” which is ultimately choosing reaction over response, the inability to embrace the reality of life that is unsatisfactory, a life filled with anxiety and suffering. That suffering can include physical pain, habitual hard-to-control emotional reactions and an exhausting, ceaseless, neurotic monkey-mind narrative.  Simple Reality provides a strategy with a much more predictable outcome than the rapture.

Sunday morning, May 22 a lot of people are going to have a hangover of sorts, I wish Molly Ivins were here to respond with one of her columns. I can hear her raspy, full-throated laugh. She found the antics of her fellow homo-sapiens a constant source of wonder and amusement.  So do I!