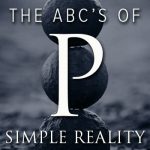 This changeless Reality is pure consciousness. [i]

What if we were to synthesize all of the wisdom and effective transformational practices discovered by humanity thus far into one story (Simple Reality), a worldview of Oneness, would the behavior of those who internalized this new narrative be affected?

Humankind has been unsuccessful so far in creating a sustainable culture. Culture has been defined as the totality of socially transmitted behavior patterns, arts, beliefs, institutions, and all other products of human work and thoughts characteristic of a community or population. We prefer the simpler definition of feelings, beliefs, attitudes, and values. Humanity has been unsuccessful in part because it has not been asking profound questions on how to create a sustainable human community let alone answering those questions.

A fundamental tenet in Simple Reality is that the universe is friendly. One may ask how we can say the universe is friendly when there is so much “evidence” to the contrary? What if there is another way of looking at the evidence, what if there is a profoundly different perspective, a second reality not as apparent as the first? Many of the deepest thinkers past and present say this is the case. We will meet them and have the opportunity to examine what they say and then place it into the overall context of a new paradigm.

Paradigm A (P-A) cannot be described adequately in words or represented clearly by models or constructs, but can only be profoundly and completely embodied or “felt” in the present moment beyond all thinking. Nevertheless, we can say that P-A is a state of realizing the inter-relationship, inter-dependence, and inter-being with all of Creation.

What does it “feel” like to live within the narrative of P-A, or what we also call Simple Reality? In the words of Ken Wilber: “It [the True self] becomes a philosopher, a dreamer in the best sense; an internally reflexive mirror, awestruck at its own existence.”[ii]  The True self in P-A is our awakened state or as Jung said: “He who looks outwardly dreams, but he who looks within awakes.”[iii]

Simple Reality includes a worldview, a story composed of our feelings, attitudes, beliefs and values. These are the aspects that our intellect can assist us with. John E. Mack describes it this way: “Worldviews, and the ways of knowing that produce and sustain them, structure our perceptions and define how we experience ourselves in relation to the universe. They determine how we relate to each other and to the Earth itself, how we find satisfaction, and how we come to terms with the ultimate questions of living and dying. For these reasons, there is no matter of greater significance than which worldview, or paradigm is ascendant in our society.”[iv]

It is helpful to make the distinctions between paradigm A and paradigm B in detail. The following partial list is meant to help us begin to get the feel of the profound difference between these two worldviews.

Feeings or emotions, beliefs, attitudes and values in:

In addition to clarifying the differences between the two paradigms we also begin to entertain the possibility of a collective shift between paradigms, of moving humanity from one to the other. “How to Change Paradigms: ‘You keep pointing at the anomalies and failures of the old paradigm, you keep speaking louder and with assurance from the new one, you insert people with the new paradigm in places of public visibility and power. You don’t waste time with reactionaries; rather, you work with active change agents and with the vast middle ground of people who are open-minded.’”  Donella Meadows in this description emphasizes the importance of continuing to contrast the two paradigms emphasizing the advantages of P-A over P-B.[v]  The most effective and realistic paradigm shift, however, will involve one person at a time until a so-called “critical mass” is reached.

Psychology supports the importance of the worldview in achieving behavioral change. Daniel Brown confirms that: “Social psychologists have shown that alterations in one’s outcome, expectations and belief system [worldview] have a significant impact on all types of behavioral change.”[vi]

Mixing mysticism with physics often reveals interesting insights related to P-A. Will Keepin, a mathematical physicist, describes the worldview of David Bohm, a colleague of Einstein’s when he was at Princeton. “So Bohm proposes a tripartite structure to reality: matter, energy and meaning. Moreover, each of these basic notions enfolds the other two. Thus, ‘energy’ consists not only of explicate energy, but also includes implicate matter and implicate meaning. Put another way, energy ‘enfolds’ both matter and meaning. Similarly, matter enfolds energy and meaning. And finally, meaning enfolds both matter and energy. Meaning lives in the implicate order and is just as real as matter and energy.”[vii]  Bohm’s theory of the Implicate Order is foundational to understanding P-A.

In the context of Christianity, we have Jung describing the Implicate Order expressing through each person. “The future indwelling of the Holy Ghost [Implicate Order] in man amounts to a continuing incarnation of God. Christ, as the begotten son of God and pre-existing mediator, is a first-born and a divine paradigm which will be followed by further incarnations of the Holy Ghost in the empirical man.”[viii]

The mystic, Thomas Troward, expresses P-A in still another way. “The spiritual kingdom is within us, and as we realize it there so it becomes to us a reality. It is the unvarying law of the subjective life that ‘as a man thinketh in his heart so is he,’ that is to say, his inward subjective states are the only true reality, and what we call external realities are only their objective correspondences.”[ix]  The inescapable conclusion then is that the world of form has no substantial reality or meaning beyond that which we give it.

Mystics are found in the most unlikely places, but of course, we are all mystics at heart. The following content relating to P-A was revealed by the mind of an academic, an intellectual and professor of history. Joseph Campbell describes the insights of Professor Toynbee. “As Professor Arnold J. Toynbee indicates in his six-volume study of the laws of the rise and disintegration of civilizations, schism in the soul, schism in the body social, will not be resolved by any scheme of return to the good old days (archaism), or by programs guaranteed to render an ideal projected future (futurism), or even by the most realistic, hardheaded work to weld together again the deteriorating elements. Only birth can conquer death—the birth, not of the old thing again, but of something new. Professor Toynbee uses the terms ‘detachment’ and transfiguration’ to describe the crisis by which the higher spiritual dimension is attained that makes possible the resumption of the work of creation. The first step, detachment or withdrawal, consists in a radical transfer of emphasis from the external [P-B] to the internal world [P-A], a retreat from the desperations of the waste land to the peace of the everlasting realm that is within.”[x]

We conclude this article with one of the most profound and deeply felt sources of the P-A experience, poetry. A poet often expresses profound feelings in the context of P-A. The best poets usher us into the realm of Simple Reality. Kahlil Gibran is such a poet.

Art
And if there come the singers and the dancers and the flute players, buy of their gifts also.
For they too are gatherers of fruit and frankincense,
and that which they bring, though fashioned of dreams,
is rainment and food for your soul [xi]

Children
Your children are not your children.
They are the sons and daughters of Life’s longing for itself.
They come through you but not from you.
You may give them your love but not your thoughts,
for they have their own thoughts.
You may house their bodies but not their souls,
for their souls dwell in the house of tomorrow,
which you cannot visit, not even in your dreams.
You may strive to be like them, but seek not to make them like you. [xii]