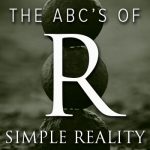 The first “reality” from a Buddhist perspective is suffering. Suffering arises with the sensations and our reactions to them. If we don’t react but instead “respond” then we do not have suffering. Being “present” to our experience allows us to respond instead of react and we attain the experience of the Absolute instead of the relative.

How are illusions developed? First, the particular sense involved, e.g. sight, “cognizes” the emotional part of the brain registers, and the reactive part of the mind reacts by choosing either craving or aversion. The apparent truth creates an illusion in the mind by dividing and fragmenting apparent reality. We become enthralled with P-B and are unaware of the true nature of reality.

“The painfully perturbing dissolution of familiar forms, which suggests to weaker spirits that the ultimate reality is nothing but a chaos, may reveal to a steadier and more spiritual vision the truth that the flickering film of the phenomenal world is an illusion which cannot obscure the eternal unity that lies behind it.”[i]