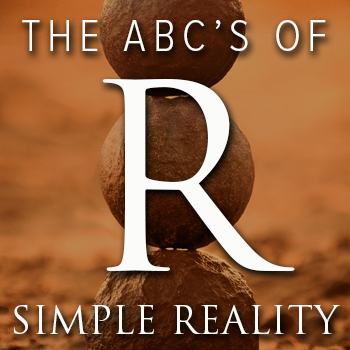 Let’s begin with a look at what’s involved with reaction. In psychological terms “reaction” is called physiological stress response (fight or flight). The reaction sequence is perception, then the psycho-chemical production of energy (potential afflictive emotion) and then the action taken, the reaction. The following is an example of an unconscious collective reaction demonstrating the danger of living in P-B. The majority of heart attacks in the U.S. occur on Monday morning at 8:00 a.m. This could be called an aversive reaction, caused by the dread of an imagined future experience.

The sensation that triggers the initial reaction starts the first round of conditioned afflictive emotion and then the second round of suffering comes with our chosen reaction whether it is identified with the mind, body, emotions or any combination of the three. That choice can be conscious or unconscious depending in how lacking in awareness we are of the nature of reality, that is to say, how much we are grounded in the present moment. All triggers and reactions or phenomenon are impermanent and hence are illusory or in other words, they lack substantial reality.

The conventional remedies recommended by therapists reveal a less than profound understanding of what is happening in a human reaction. For example, to “fool your brain into thinking that you are in control” is a less powerful context than “you are in control” when you are triggered and the energy of the physiological stress response, the reaction, begins to occur. Indeed, we are all powerful when we breathe and decide at the point of that infinite power to respond rather than react. We have the choice to enter P-B or P-A, the realm of afflictive emotion and suffering or the realm of the present moment where afflictive emotions cannot enter.

Psychologists could say that pausing to breathe and respond would be entering the beta state after the brain wave patterns associated with this type of response. We contend that although that happens, we need a much more profound context to reach the deepest “feeling” state of the present moment knowing that it is more than a physiological reaction but a response that takes us into a transcendent realm that through practice we can enter at will.

The next two paragraphs which are duplicated in the articles on fear, identity, meditation and response and reaction, focus on the principle of Oneness and how what appear to be separate subjects are, in fact, each a part of a whole.  Even the act of separating these articles in this encyclopedia is a division of Simple Reality that is contrived and supports the illusion of P-B.

The reason that we must not identify with the mind, body and emotions, for example, is because it is through them that we express fear and this expression is the reaction that is the root cause of human suffering.  It is through the practice of meditation that we begin developing the awareness that will allow our new identity to emerge.

The following story is a classic illustration of the distinction between response and reaction. An older Samurai ready to retire to a life of contemplation and weary of the violence that too often characterized his life was ready for some peace. Although he had gained much experience in his conflict-filled life one thing only remained a puzzle for him as he approached the end of his time on this earth. Sharing his question with a friend, he was directed to a monastic mountain retreat presided over by an aged and reputedly wise Zen master.

Shortly after arriving at the end of a long and arduous climb up a steep mountain he was ushered into the tea room where the sage with a long white beard sat on a cushion. The Samurai adjusted his two swords and lowered himself onto his cushion. After they had finished their tea the sage asked, “Why would a warrior want to travel so far to have tea with an old man not long for this world?” “I have come to ask a question of one reputed to be wise in the ways of this world and the next,” replied the Samurai. “What is your question honorable Samurai?”

“I have only one concern that will disturb my days spent in meditation as I approach the end of my life and that is: What is the difference between hell and heaven?” With a slight sneer, the old man snarled and said, “Do you think a common, ignorant, simple minded oaf such as you could comprehend the answer to such a profound question?”

Astounded and furious, the Samurai leaped to his feet drawing his two-handed sword with one sweeping and violent arc. The sage raised his left hand and shouted, “That is hell!” The Samurai, caught off guard took a deep breath, and let the old man’s reply penetrate to his heart. He smiled as he replaced his sword and slowly sank into his cushion. “And that is heaven,” whispered the old sage.

But words are words; I never yet did hear,
That the bruis’d heart was pierced through the ear.
Brabantio in Shakespeare’s Othello

Ken Wilber quotes Heinz Hartmann, who seems to understand reaction and response, and can take us deeper into the psychology of reaction. “Evolution to Heinz Hartmann [the founder of psychoanalytic developmental psychology], is a process of progressive ‘internalization,’ for, in the development of the species, the organism achieves increased independence from its environment, the result of which is that reactions [italics added] which originally occurred in relation to the external world are increasingly displaced into the interior of the organism. The more independent the organism becomes, the greater its independence from the stimulation of the immediate environment.”

Understanding that we have a choice is critical to whether we can ever change our life’s narrative and Deepak Chopra understood this. “In other words, most of us—even though we are infinite choice-makers—have become bundles of conditioned reflexes that are constantly being triggered by people and circumstances into predictable outcomes of behavior. Our reactions seem to be automatically triggered by people and circumstances, and we forget that these are still choices that we are making in every moment of our existence. We are simply making these choices unconsciously.”

Gandhi and Marcus Aurelius also understood what our objective should be in regard to reaction and response.

It is not that I am incapable of anger, for instance, but I succeed on almost all occasions to keep my feelings under control.
Gandhi

Let there be freedom from perturbations with respect to the things which come from the external cause.
Marcus Aurelius

Reaction is the false-self behavior in the illusory context of P-B. It is the false-self behavior in effect that creates the toxic worldview (P-B). By resisting the temptation to act on our afflictive emotions we can move to response and compassion. We will be tempted continually by our conditioning and by the illusion of the pseudo-power we feel by reacting from the false-self energy center. Here is a diagram of the sequence after being triggered and the choices that we have when we are deciding whether to employ the Point of Power Practice. If we don’t pause and react consciously, we have lost the opportunity for choice. We are Pavlov’s dog salivating and the steak is only an illusion.

Krishnamurti lived most of his adult life in the narrative of Simple Reality and when asked to sum up his decades of teaching about the reality and power of P-A, he did so in the sentence quoted above. We do have a choice to react or respond and the effects of that choice can even be measured physiologically. “‘For example, an MRI,’ reports Byron Belitsos, ‘can illustrate how the amygdala of depressed people behaves differently from non-depressed people. (The amygdala is a center of emotion in the brain, especially as related to memories). When read a list of words that convey sadness, for example, the amygdala of depressives showed more than three times the duration of increased blood flow than those of their nondepressed counterparts. In other words, depressed folks ruminate [react] on sadness while well-adjusted others simply move on [respond].’”

C. G. Jung would have agreed with Krishnamurti about the effectiveness of response over reaction. “The therapeutic measure of unresisting acceptance had proved its value yet again.”

Human intuitive self-understanding did not have to wait for modern science to point the way to Simple Reality. “It seems that long before modern brain research, the Buddha discovered [intuitively] how our minds are bound by instinct and habit [the false-self survival strategy], or—as he might have said—by both collective [the collective unconscious] and individual karma [reaction of the afflictive emotions].”

Today I shall judge nothing that occurs.
A Course in Miracles

We (individually and collectively) create our own reality. Therefore, to create our reality and then go into afflictive reaction to that reality is an exercise in absurdity.  Or as Deepak Chopra puts it: “Today I will accept people, situations, circumstances, and events as they occur. This means I will know that this moment is as it should be, because the whole universe is as it should be.”

“When you rail against an unfavorable environment, or a situation or condition you are not acting independently, but almost blindly reacting. You are reacting to events that seem to happen to you, and always in reaction to a situation. To act in an independent manner, you must begin to initiate action that you want to occur physically by creating it in your own being.”  This observation by Seth calls for the Point of Power Practice which makes us the creator of our own experience rather than a reactor to what happens in the world of form.

Marcus Aurelius as a Roman Emperor, no doubt, had many opportunities to test his ability to respond to life. He seemed to have discovered his own “Point of Power Practice.” “For to be vexed at anything which happens is a separation of ourselves from nature [and] the soul does violence to itself when it is overpowered [reacting] by pleasure [craving] or by pain [aversion].

“[Leave] these agitations [reactions] which are foreign to nature.”

What are the rewards for those of us who make the commitment to choose response over reaction, to live our life as a Point of Power meditation? Is it worth the time and effort? Karen Armstrong seems to think so. “Living in this way, day by day, hour by hour, moment by moment, we would enjoy a constant, slow-burning ecstasy that leaves the self behind.”

Eckhart Tolle also is an advocate of shifting paradigms. “Whenever you accept what is, something deeper emerges than what is. So, you can be trapped in the most painful dilemma, external or internal, the most painful feelings or situations, and the moment you accept what is, you go beyond it, you transcend it. It may still be there, but suddenly you are at a deeper place where it doesn’t matter anymore.”

I don’t know about you but what I have found is that choosing response instead of reaction time and time again is a life-transforming if not transcendent experience.