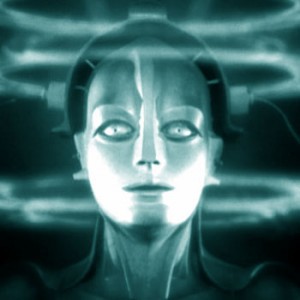 This month (June 2014) there will be a scientific demonstration opening the World Cup in Brazil. Using a brain-to-machine interface a paralyzed teenager will make the ceremonial first kick. “This feat will be accomplished through an ‘exoskeleton’ directly controlled by the teenager’s thoughts and read through a helmet-mounted EEG machine.”  We are clearly entering the brave new world of mind-machine interface. For our purposes in the context of Simple Reality we are more interested in the mind-machine collision with consciousness and the implication it has for human awakening or failure to awaken. Let’s keep the profound questions in the forefront of our awareness as we begin this foray into the future.

There is no science of awareness, no science of the mind because awareness transcends a relatively impotent science. But for the vast majority of people who don’t know this aspect of P-B the world of science fiction beckons as a possible reality. From the context of P-A, science is fiction. Nevertheless, for many of us science offers a playground for speculation and creativity. One such playful speculator is Michio Kaku author of Physics of the Future and The Future of the Mind: The Scientific Quest to Understand, Enhance, and Empower the Mind.

Wow! We live in exciting times, right! Not so fast bucko; remember, the energy of excitement often creates suffering. False self meets robot can turn ugly fast. We do not mean to spoil the fun that the titillation found on the frontiers of technological innovation brings. Actually, that is precisely what we intend to do because we humans are not ready to distinguish between heaven and hell and hell is where we are headed, aided and abetted by science.

In his latest book, Kaku has a chapter that leads the reader to imagine a robot with human-like consciousness or perhaps some of us will imagine a more zombie-like behavior. “A compelling chapter on artificial intelligence describes the explosion in robotics and the new research that seeks to broaden the requirements for silicon self-consciousness, including a capacity to feel emotion.”  Oh good! Do we really want to create a robot that reacts?

Which brings us to another profound principle that defines Simple Reality. We cannot create technology that has more consciousness than we ourselves have, which it pains us to reiterate, is very little. By replicating our own reaction-centered identity or “mind,” we are inviting our robot-cousins into our own self-created hell which they will join us in perpetuating. Obviously, we would do well to create a healthy prototype before we begin making copies of ourselves to wreak further havoc on the human community which is, last time we looked, pretty havoc-heavy. Otherwise, not only will we have drooling human zombies trying to have us for lunch but staggering, clanking robots tirelessly in pursuit of their own inventors. (Hell is the only label that does justice for a community in which humans choose their own self-destruction and then labor to invent sophisticated robots to aid in the process.)

How are these robot-zombies to be made? “By mapping out the ‘connectome’—the explicit account of every neural connection in your head—Kaku tells us it should be possible to reverse-engineer each and every person’s brain. Reconstruct this connectome in a computer and you will have downloaded yourself into that machine. In this way the future of the mind, your mind in particular, might last as long as there are computers to run your connectome.”  Sounds easy and that’s just the problem.

Philosopher David Chalmers introduced the distinction between “easy” and “hard” problems 20 years ago. The not-so-easy “easy” problem of creating an exoskeleton enabling a paralyzed teenager to kick a soccer ball using his thoughts is impressive. The “hard” problem of creating a robot that “feels” compassion will be pointless when we begin bringing to life our own True self. The only distinctions humanity needs to focus are those between reality and illusion, response and reaction, and intuition and intellect. If we can’t do that, any robots no matter how sophisticated will only be joining the rest of us in our pointless and mindless suffering.

Reviewing Kaku’s book for The New York Times Book Review, Adam Frank was probably inspired by his intuition when he had the following wonderful insight. “Thus the essential mystery of our lives—the strange sense of presence to which we’re bound till death and that lies at the heart of so much poetry, art and music—is dismissed as a non-problem when it’s exactly the problem we can’t ignore. If we’re to have anything like a final theory of consciousness, we had better be attentive to the complexity of how we experience our being.”  Or perhaps the truth will be found in the “simplicity” of our being.