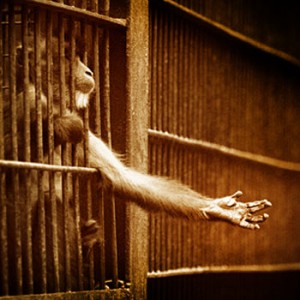 The story we tell ourselves ultimately determines our behavior and philosophy because our philosophy is likewise determined by our beliefs, attitudes and values and in a circular fashion our beliefs, attitudes and values comprise the story we tell ourselves. Our story determines our identity which drives our behaviors and our behaviors are what distinguish us from our animal cousins. Just as some of our most eminent philosophers who have dealt with these questions at great length we will now examine the distinctions between our animal cousins and ourselves. Can you tell when you are being set up? Ha! Ha! Ha!

One of the most self-destructive beliefs we have is in the other whether that other is a fellow human being or “nature” including animals. Living in this shattered, disintegrating and delusional paradigm, we will hopefully come to realize, also has the effect of shattering our psyche. Read the following but be prepared to experience some reactions like sadness, for example.

What do you call a physician? A veterinarian who treats only one species.
Anonymous

There was a time when all of humanity lived closer to nature. There was also a time when both physicians and veterinarians claimed the same 19th century doctor, William Osler, as the father of their fields. Yes, until the late 1800’s veterinarians did treat both animals and humans until increasing urbanization led to more specialization in medicine.

Is seeing pain or sadness in the face of an animal a revealing projection or a tendency to anthropomorphize or be overly sentimental? Barbara Natterson-Horowitz and Kathryn Bowers, authors of Zoobiquity: What Animals Can Teach Us About Health and the Science of Healing, see evidence of what students of Simple Reality already know; that apparent divisions or “splits” among the many aspects of Creation are not what they seem.

“Do wild animals get medically obese? Do they overeat or binge eat? I learned that yes they do. I also discovered that geese, gorillas and sea lions grieve and may become depressed. Shelties, Weimaraners and other dog breeds are prone to anxiety disorders.”

Many types of cancers found among humans are also found in various animals. How about behaviors associated with the sensation energy center of the human survival strategy, the “pleasure” center? Do animals get high? Animals do indulge and overindulge (even to the point of death) in opium in poppies, alcohol in fermented fruit and berries, stimulants in coca leaves and coffee. Some lab rats able to seek out and self-administer doses, once habituated, may neglect their “children” and even forego food and water to obtain their drug of choice.

Speaking of the human survival strategy, how closely does the animal survival strategy resemble our own? Nature has provided animals with instinctive triggers and sensations just as it has provided us with incentives to make choices (made consciously or unconsciously). “Anxiety makes them careful. Fear keeps them out of harm’s way. And one thing creates, controls and shapes these sensations, whether positive or negative: a cacophonous chemical conversation in the brains and nervous systems of animals. Time-melting opioids, reality-revving dopamine, boundary-softening oxytocin, appetite-enhancing cannabinoids and a multitude of other neurohormones reward behavior.”

A higher regard for our animal cousins can help us with understanding our own self-destructive behaviors; they are not only like us in many ways, they are us in more ways than we appreciate. For example, substances that relieve human pain and anxiety can prove deadly for the human animal who fails to understand where they are and who they are. Irrational distortions in behavior can lead to addictions and violence that threaten civilization itself.

“And this is precisely why drugs can so brutally derail lives. Ingesting, inhaling or injecting intoxicants—in concentrations far higher than our bodies were designed to reward us with—overwhelms a system carefully calibrated over millions of years. They remove the need for the animal to input a behavior, before receiving a chemical dose. In other words, pharmaceuticals and street drugs offer a false fast track to reward—a shortcut to the sensation that we’re doing something beneficial.”

Behavioral parallels—including the discovery that the younger the animal is at the first exposure to drugs the more likely it is to become addicted—can give us insights into strategies that the 40-year-old “War on Drugs” has failed to create. Parents might involve their children in less risky, more natural ways in achieving chemical rewards like exercise, physical and mental competitions and less dangerous “risk-taking” like a performance art.

Inhabiting the same planet as humans has threatened animals in ways most of us are not aware of. Some animals have been getting obese along with many of us. Nearly half of our pets are now overweight or obese. “With our pets’ excess pounds has come a familiar suite of obesity-related ailments: diabetes, cardiovascular problems, musculoskeletal disorders, glucose intolerance, some cancers and possibly high blood pressure. They’re familiar because we see nearly identical problems in obese human patients.”

An enhanced awareness on our part regarding what’s happening in the environment around us and our profound connection to it will give us clues to successful strategies for coping with our self-destructive behaviors. Nature has a “weight-loss” plan for animals with cyclical periods of food scarcity—if it ain’t there, you can’t eat it. We can accomplish the same thing by having the discipline to not buy and bring home and store in our environment the foods that will make us fat if we eat them but will not if they are not available when the urge to eat them presents itself.

“I think I could best describe the feeling I get as total bliss. It relaxes me.”  Who wouldn’t want that and no it was not the result of substance abuse or of food indulgence. The whole experience was a result of and created by the human mind facilitated by the chemistry of the body. Yes, we are going to say that animals do it too. Do what?

The above quote was a university blog post, the voice of a 22-year-old woman. She was talking about taking something sharp—a razor blade, scissors, broken glass, a knife or a safety pin and slicing open the skin to create a wound and bleeding—called by psychiatrists, “self-injury” or in the vernacular of our day, “cutting.”

Are we going to say that animals do “cutting?” Yes we are. Hold on, hold on! Cutting is just one of many human behaviors resembling animal behaviors that create the desired reaction or effect that both humans and apparently animals seek. These behaviors are centered in and driven by the sensation energy center of the false self and are coping “skills” or a part of the organism’s survival strategy. In the human they are behaviors that are “chosen” but not consciously. In the animal kingdom they are instinctual.

We know you are curious about how animals “cut,” so let’s get to that first and then we will find out why both “humans” and animals exhibit these behaviors. Dogs first. Golden retrievers, Labs, German shepherds, Great Danes and Doberman Pinschers are among those known to obsessively lick and gnaw at their own bodies until they open sores that can cover the entire surface of a limb or the base of the tail.

“A friend of mine once took her cat to the vet assuming it had a skin affliction that was causing all the hair to fall off its legs, revealing red, oozing sores. After some tests to rule out parasites and systemic diseases, her vet said her pet was a ‘closet licker.’ It’s a common diagnosis for house cats, sometimes called psychogenic alopecia. The cat was injuring itself with no clear physical trigger, in a way that was reminiscent of a human cutter alone in her room.”

Owners of horses can be confused by outbursts of violent spinning, kicking, lunging and bucking without apparent explanation. “Many of the compulsive behaviors seen in horses, reptiles, birds, dogs and humans share core clinical features, including the potential to cause suffering and profoundly disrupt a patient’s life.”

For causation of what at first blush might seem to be unexplainable behaviors, we start with the links among grooming or “cleaning activities,” obsessive-compulsive disorder and the fear created by any animal that thinks it lives in an unfriendly universe and thereby creates that unfriendly universe (and accompanying stress) in its mind and resultant behavior patterns.

“Are your cuticles smooth or are there some rough edges begging to be picked or nibbled off? Are you twirling a lock of hair around your finger, twisting your eyebrows, stroking your own cheek, massaging your own scalp? Studies looking at hair pulling, scab picking and nail biting all point to a calm, trancelike state that typically accompanies these small, automatic, self-soothing activities.”

For the more extreme activities, like human cutting, we could say that it is grooming gone out of control. “All of us—from full-blown cutters to secret hair pluckers and nail-biters—share our grooming compulsions with animals. Grooming represents a hard-wired drive, one that’s evolved over millions of years with the positive benefits of keeping us clean and binding us socially.”

But is it a healthy “binding?” Compulsive grooming is clearly “suffering” to paraphrase the first noble truth. Compulsive grooming is a survival strategy, a reaction, pure and simple but then so are most human behaviors in the context of P-B. The vet, the psychiatrist or the physician looking for “systemic diseases” need look no further than the illusion of P-B creating a delusional identity creating anxiety-driven and self-destructive behaviors. Compulsive behaviors, drugs, therapies and programs will never ease our anxieties. Only compassion among all of Creations’ animals can do that.

In short, humanity is “cutting” itself to death. Without a paradigm shift like Simple Reality, these neurotic behaviors will only grow more intense, widespread and grotesque.