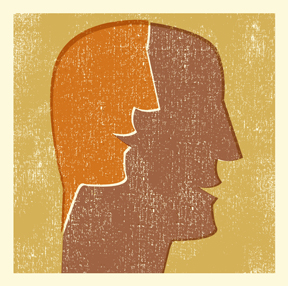 Definitions of prophecy include divine inspiration. In the present moment we are all experiencing the connection to the Implicate Order or source of all creation; hence we are all at least potential prophets. The critical question is not: can we prophesy but can we speak of reality in a profound way without having our insights clouded by reaction. Very few so-called prophets have been able to do this because they could not escape the influence and conditioning associated with the story that contained them; they couldn’t transcend P-B. Nevertheless, the tradition and history of the prophets of the Old Testament can shed light on our challenge today of creating a sustainable human community because that is what they, in their severely limited way, were trying to do.

The earliest prophets in Judea evolved into strident critics of the false-self behaviors of their fellow tribal members, especially those living in the “cities.” Sometimes coming from the more wholesome countryside, they were dismayed at urban cultural behaviors and were not timid in saying so.  “[Amos] Having left his herds to see Beth-El,  was horrified at the unnatural complexity of the life which he discovered there, the inequality of fortune, the bitterness of competition, the ruthlessness of exploitation. So he ‘stood by the gate,’ and lashed the consciousless rich and their luxuries…” It is not hard to find in the 21st century these same sentiments. The false self has not changed in the 2,700 or more years since the prophets of old became incensed at what they deemed immoral and self-destructive behavior. We could use a little of that indignation today.

Not only did prophets like Amos transcend the behavior of previous prophets who were little more than superstitious seers and prognosticators but inaugurated “…a new note in the world’s literature,” and reached “the peaks of the world’s prose.” The poetic elegance and power familiar to most of us begins to trumpet from the lips of this procession of well-intentioned iconoclasts. In our own time we can hear these words from the pulpits and hustings across the American religious and political landscape. We can imagine Amos shouting outside the gates at those going about their normal pursuits of security, sensation and power: “But let judgment run down as waters, and righteousness as a mighty river.” Or Hosea pointing at the golden calf and haranguing the worshippers that it “shall be broken into pieces; for they have sown the wind, and they shall reap the whirlwind.”

We can hear Isaiah clearly because we have heard him so often if we live in a Judeo-Christian culture. “And they shall beat their swords into ploughshares, and their spears into pruning-hooks; nation shall not lift up sword against nation, neither shall they learn war any more.” That great contemporary prophet, Martin Luther King Jr. understood the passion of these early prophets and the urgent need for all of us to express the archetypal prophet within. “Every valley shall be exalted, and every mountain and hill shall be made low; and the crooked shall be made straight, and the rough places plain…” The spirit of radical transformation needs prophets like this today.

With these prophets for the first time in the literature of the Middle East a social conscience begins to take form and in a sense foreshadowed the gospel of Jesus Christ. Listen in this next sentence for some of the foundational principles of Simple Reality. “Isaiah and Amos began, in a military age, the exaltation of those virtues of simplicity and gentleness [compassion], of cooperation and friendliness, which Jesus was to make a vital element in his creed.”

Perhaps even more important is that the transformation resulting from the profound insights of these many visionary prophets extended to the identity of Jahveh. “They were the first to undertake the heavy task of reforming the God of Hosts into a God of Love; they conscripted Jahveh for humanitarianism as the radicals of the nineteenth century conscripted Christ for socialism.” Jesus was the greatest in this long line of prophets and those of us that accept the mantle of being advocates for a new human narrative can take inspiration from those who have gone before us and had the courage to speak truth to power. We can remember the mission of those compassionate leaders who often spoke as having been sent not “to curse the people for their sins, but to bring them hope in their bondage… good tidings unto the meek; to bind up the broken-hearted, to proclaim liberty to the captives, and the opening of the prison to them that are bound.”

And virtually all of us are bound in the prisons of our own reactive, conditioned behavior patterns. We are slaves waiting for liberation. We each hold the keys of our own freedom. Listen to the prophet within.

References and notes are available for this essay.  Find a much more in-depth discussion in books by Roy Charles Henry: Where Am I?  The First Great Question Concerning the Nature of Reality Simple Reality: The Key to Serenity and Survival

1 Response to The Prophet Within