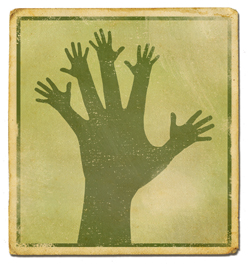 To believe in solipsism, which holds that the “self” [false self] is the only identity possible, would be like saying hell is the only destination possible, grace, good works, salvation or not. Unfortunately, most of us have made just that choice as far as our identity is concerned which has delivered us to the Hades of our own imagination. The good news for our lost, self-centered “self” is that the more deeply we understand the influence our identity has on our behavior the better chance we have of shifting our experience from one of existential anxiety to one of peace and contentment, from the experience of hell to one of heaven.

In P-B “all the world’s a stage” and the choices of roles (personas or masks) or identities are endless. As children, since we stride onto the stage with no auditions or no knowledge of what the “play” is about, we accept the roles assigned to us as neo-thespians. Our fellow actors help us learn our lines and tell us which costumes to wear and which masks fit properly with the several roles we are being directed to portray.

We make myriad identity choices during our lifetime but rarely do we choose an authentic identity based on the facts related to who we truly are. Most of us do not know what those facts are nor do we know the difference between reality and illusion.

Many ghostly mirage-like identities vie for our attention much like the ghost of Hamlet’s father hounded him to assume the role of the dutiful son seeking murderous revenge. Largely ignorant of our True-self identity, we acquiesce to the poisonous influence of the story that contains us and our fellow actors bent on expressing neurotic suffering. As the human drama moves toward the concluding act, humanity is caught up in the momentum of a great tragedy.

We are already well-acquainted with the behavior of Americans acting out their P-B identities, expressing their mind, body and emotional reactions, while pursuing plenty, pleasure and power.  With the help of Gish Jen and other sources with insights related to the distinctions between Asian and American narratives we can see very different on-stage performances flowing from markedly different identities performing in “stage settings” unfamiliar to most of us.

“The scholars of cross-cultural cognition, who reject the universality of Western models of the mind, maintain that this emphasis on social context translates into a measurable divergence in how Easterners and Westerners literally see the physical world.”

Richard Nisbett, University of Michigan psychologist, says that “‘Westerners are protagonists of their autobiographical novels,’ whereas Asians are ‘merely cast members in movies touching on their existence.’” Westerners, in other words are expressing a “me” identity while Easterners tend to express the identity of “we.”

Easterners are no more conscious than Westerners, the contrasting behavioral differences are cultural and contextual and the Eastern false self has its own downside. “She [Jen] concedes that interdependent selves can produce ‘group policing’ that is ‘intense and ruthless’ but insists that ‘the joy of a functioning interdependent relationship can be tremendous too.’” We are not looking for healthy roles on the Eastern stage, but rather insights into how we might transform the content of both versions of these P-B “theatre’s of the absurd.”

Looking at the broader Asian narrative including art, medicine and even mealtimes, we can see the influence of the Eastern identity “on stage.” “Jen maintains that this interdependent self finds its expression in practices as various as Chinese landscape paintings, which depict the individual as dwarfed by the magnificence of his surroundings; Chinese writing, which tends to revolve around the recurrent and the typical rather than the unique and specific and dramatic; Chinese medicine, which treats the body as a single holistic system in pursuit of harmonious balance, rather than a collection of discrete parts to be fixed in isolation; and the communal Chinese meals that offer no option exclusive to any individual diner.” In other words there is less competition and more cooperation among the Eastern actors including more harmony with nature.

Yes, we are making the point that in the East they have a greater intuitive appreciation of a story that values Oneness even if that value is only partially internalized. What with globalization and the growing dominance of a false self in full flight from the same imagined catastrophe dominating the narrative in the Occident, the East is looking more and more like the West and is trading the old Taoist/Confucian script for one in which the star is Rambo or in Jen’s words the much admired American protagonist, narcissistic, and arrogant. How sad. How pathetic.

In the so-called emerging BRIC (Brazil, Russia, India and China) economies and the post-modern free market economies of the West, the assumption is that for those nations at least, prosperity means success. The truth may be something surprisingly different. Jen describes the world that her father grew up in. “…concentrating not on his individual self, but on the context within which it was constrained. The world he describes is not a modern linear world of conflict and rising action, but rather one of harmony and eternal, cyclical action, in which order, ritual and peace are beauty, and events spell, not excitement or progress, but disruption.”

Disruption is indeed what we frequently see on the world stage with chaos becoming ever more common. Humanity is increasingly committed to the shattered community resulting from the worship of the autonomous and ego-centered individual rather than the interdependent self found in the cultures of the East. We can still find these parenting values in the East and in some Asian American communities. “Parents engage in short, selective conversations with their children, emphasizing “proper behavior, self-restraint and attunement to others.” Children reading these kinds of scripts see key words standing out in bold typeface—respect, response and compassion.

Taking our seats in the theatre of P-B the stage setting communicates what type of drama we are going to see. Production values are lavish for the scenes involving the 1 percent and increasingly bleak and desolate for the bulk of humanity. We are clearly heading for darker dramas glamorizing the most unconscious aspects of human behavior.

We could have chosen and still can, a story/play that begins to shift the action on stage from “me” and “we” to “thee.” A script that reveals a new identity for human beings with a focus on “thee,” a life lived in service to thy neighbor and thence to the community.

References and notes are available for this essay.

Find a much more in-depth discussion in books by Roy Charles Henry:
Where Am I?  The First Great Question Concerning the Nature of Reality
Simple Reality: The Key to Serenity and Survival