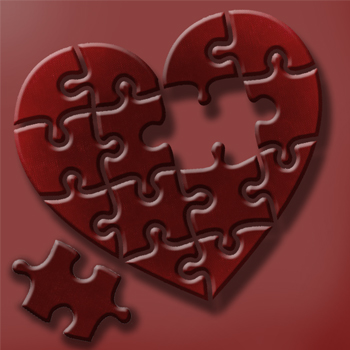 One of the possible meanings of the word integration is to make whole. Disintegration, on the other hand, is to cause a whole to separate into its component parts or to cause the destruction of that whole. We have learned that P-B is a shattered whole which is self-destructing. Simple Reality is a narrative that will make whole again that which is disintegrating.

The jig-saw puzzle makes a good analogy for this process of disintegration. The dis-assembled puzzle (P-B) is “disintegrated”. It makes no sense. It is a chaotic, disassociated jumble, an illusion of seemingly related pieces.

A strategy or process of assembling the puzzle (the Point of Power Practice) will integrate the puzzle pieces into a meaningful whole (P-A) as one’s life becomes a focused meditation of continually choosing response over reaction. Each piece or each successful moment spent in the Now is naturally related to every other such experience and these moments begin to cluster into larger and larger or longer and longer moments. A pattern begins to emerge, life begins to become a healthier and more meaningful story and our new identity begins to come into focus.

As each individual begins to see the meaning in his individual “puzzle” a larger pattern emerges wherein the individual puzzles begin to merge into a global pattern, an integrated global village. And finally, just as a symphony is born out of the integration of each instrument into a harmonious expression, the puzzle that is the entirety of Creation comes into focus, perfectly integrated into a compassionate, beautiful expression of Oneness.

Sometimes integration need involve nothing more than recognizing the non-existent illusion of formerly held beliefs and transcending those, letting them go. For example, the word and concept of “race” has been behind a lot of self-destructive human behavior—doubly sad—because there is no such thing as race. Yale University biologist Jonathan Marks puts it succinctly. “Race has no basic biological reality. The human species simply doesn’t come packaged that way.”

Like much of P-B, if we believe something, it is “real” to us, making it of paramount importance that we distinguish illusion from reality, appearances from substance. It seems that humanity has “made-up” the mental construct of “race.” Robert Boyd zeroes in on the origin of the illusion of race: “A majority of biologists and anthropologists drawing on a growing body of evidence accumulated since the 1970’s, have concluded that race is a social, cultural and political concept based largely on superficial appearance.”

In other words the idea of race, like all of the attitudes, beliefs and values contained in P-B, was created by the fear-driven human mind. Many of us will make the association between the illusion of “race” and another disastrous illusion called the other. In this way we begin to piece together the chaotic puzzle of human suffering.

If race is not a sufficient reason to defend the illusion of the “other” then how about religion? No religious group has resisted integration into the wider human community more vociferously than the Jews. “Only through this full obedience [to the Torah], they felt, could the Jews escape assimilation and extinction.”  The previous statement refers to the Jewish struggle during Roman dominance in Judea. “After the Temple was destroyed (A.D. 70), the priesthood lost influence, the Sadducees disappeared, the synagogue replaced the temple, and the Pharisees, through the rabbis, became the teachers and shepherds of a scattered but undefeated people.”

The principle of Oneness calls for the integration of the world’s peoples and gives the lie to perceived differences of any kind including the illusion of religious differences. Two thousand years after the Jews were driven from Judea by the Romans, anti-semitism remains a problem for Jews around the world. And yet who can blame any people who are loath to integrate into the unhealthy and self-destructive behaviors of the majority P-B culture? And yet, that’s what has to happen. Religion, race, the other and all similar elements of the disintegrating human community must be integrated and/or transcended.

Our reactions are like pieces of a puzzle that need to be integrated or put together. Some of the reactions originate from our past conditioning; others are repressed elements of our shadow, experiences too painful to consciously acknowledge at the time. Each time we respond to emerging shadow material we are constructing a stronger True self and dismantling the false self. “Integration of the shadow is always concurrent with the dissolution of the false persona.”

As one of what we can call “related pairs,” integration and disintegration are at the heart of creating a new identity by shifting paradigms. This process, the highest human attainment has, as we might expect, incredible rewards. Marsha Sinetar describes those rewards, “The individual feels subjectively safe. He is emotionally connected and experiences no separation, no splitting or fragmentation. He doesn’t feel isolated, separate or alone because—in a real way—his is connected, bonded, safe, “at-one-with,” at home.”

There is more than one way to language the process and experience of assembling a puzzle. John Ruskan, the author of Emotional Clearing describes the process from his perspective. “[Experience] must be digested in a certain way, called direct experience, in which it is absorbed or dissolved completely. The ability for direct experience is gained through the cultivation of “being in the moment.” Being in the moment is a mystical perspective. Witness consciousness is activated, and we function on a new and higher plane that results in a sense of well-being and euphoria as well as calling into play transpersonal powers that have been blocked by the personal ego. These powers operate on a very practical level, effecting transformation in situations that we previously resisted. By accepting, we go beyond. We reach the spiritual through the mundane. We discover the spiritual in the mundane.”  The mundane Ruskan refers to is the energy contained in a potential reaction that can be transformed into awareness by responding.

Ruskan calls his process of responding Integrative Processing. “Integration brings freedom from pain. Integration does not mean that the negative side of any dualistic experience is eliminated, but that our perception of the negative changes so it is no longer disturbing … We find ourselves with a new awareness and freedom; we have grown; happiness is unconditional.”

The Steps of Integrative Processing

Each one of us has at birth not only the desire to restore wholeness to our experience but the innate wisdom to accomplish this most glorious of human expressions. Without a new, wholesome and healthy narrative to provide a context for the integration of all of the world’s peoples, antagonistic and divisive conflicts will prevail around the world and they will be based on religious, cultural, ethnic and other differences that have no basis in reality. Unless humanity can awaken to the truth of Simple Reality then mutual self-destruction will continue to be a dominant storyline with an ending too horrible to contemplate.