Lost On The Ocean Blue 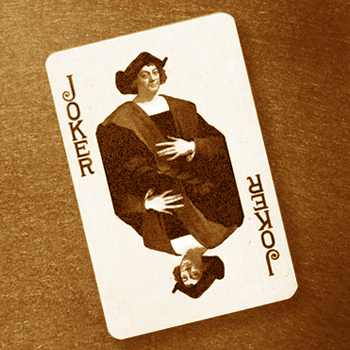 To the intellect history is either an enigma or a story that seems to reveal the motives of human behavior over time. And yet after millennia of evidence our narrative remains inexplicable to most of us. We are missing something. So maybe we need to look again at our story—this time with a more discerning—or perhaps more penetrating gaze.

We begin with a brief analysis of the nature of the concept of this business called the story. Those who know about such things tell us that a story contains conflict or two opposing forces, one called a protagonist (one who struggles “for”) and the antagonist (one who struggles “against”). Now we bring our “penetrating gaze” into play. The structure of consciousness revealed in Simple Reality enables us to identify the True self as the protagonist and the false self as the antagonist.

Ah ha! Can you feel the narrative not only thicken but begin to come into focus? The True self as protagonist is trying to wake up but the conditioning of the false self is a powerful force against that happening. The True self is also challenged—confronting choices—first, between two paradigms (P-B and P-A); secondly between two identities (determined by the outcome of the process of the first choice); and thirdly between two dominant behaviors, namely reaction or response (suffering or transformation) also driven by the identity chosen in the second step. Notice how our history is woven together in a web of cause and effect. We don’t tend to understand our history, our day-to-day experience in this way. This has caused us enormous problems.

For example, many Americans learned that the history of America began with Columbus in 1492, not with indigenous peoples crossing the Bering Strait land bridge or with the Vikings, as both were relegated to the abyss of the other. The story we wanted to tell ourselves about American exceptionalism needed the Italian explorer because he was white, European and a Christian. He was also a false self on steroids.

Columbus in his negotiations with Ferdinand and Isabella of Spain revealed the universal cravings of the false self. We are all familiar with these basic human needs; only the details differ from person to person. Columbus agreed to sail west from Spain to Cipango (Japan) and then on to the Indies. He would be the vanguard of both the imperial ambitions of Spain and opportunities for the Church as well. The energy that drives history is well-known to the readers of Simple Reality.

And finally we find irony operating in the history of humanity. Put simply, we find contrast throughout the unfolding of our story between what is and what ought to be. Is our experience inevitable or predetermined or could it be modified by our own efforts? If it is the latter, then how is it to be changed? Are we aware of the possibilities for directing our fate?

One idea we are loathe to think about is the possibility that we by our own choices are responsible for the direction our history has taken us. Have we deceived ourselves in some way choosing the less desirable of two possibilities ending up with what our history has been rather than a better what could have been?

We have certain beliefs, attitudes and values often taking them for a fixed reality rather than something we are responsible for having created, a worldview that might be causing a less than pleasant experience. Take the belief in American exceptionalism for example.

Myth 1:  There is something superior about American exceptionalism
Myth 2:  The U.S. behaves better than other nations do
Myth 3:  America’s success is due to its special genius
Myth 4:  The U.S. is responsible for most of the good in the world
Myth 5:  God is on our side

The irony built into America’s history is the contrast between reality and illusion. We are not the only nation to think we are exceptional. “The British thought they were bearing the ‘white man’s burden,’ while French colonialists invoked la mission civilisatrice to justify their empire. Portugal [Spain’s chief competitor in the New World during the time of Columbus], whose imperial activities were hardly distinguished, believed it was promoting a certain missao civilizadora. Even many of the officials of the former Soviet Union genuinely believed they were leading the world toward a socialist utopia despite the many cruelties that communist rule inflicted.”

This could be called the “holier than thou myth.” Many of us truly believe that we behave better than other great powers and conveniently overlook those behaviors that might suggest otherwise. “Asked recently about an innocent man who had been tortured to death in an American ‘black site’ in Afghanistan, former Vice President Dick Cheney did not hesitate. ‘I’m more concerned,’ he said, ‘with bad guys who got out and released than I am with a few that, in fact, were innocent.’”  Compassion is a casualty, or we might say, part of the “collateral damage” attending the behavior of an arrogant American worldview.

All nations and most individuals are unconscious and controlled by their false-self survival strategies and are driven to adopt “survival of the fittest” behaviors. It is then not so ironic that the U.S. has done what it thought it had to do to survive and paid little attention to moral principles, especially where the other was concerned.

We can call this myth “just plain ole dumb luck.” It was not God (manifest destiny) or especially intelligent leaders that elevated America to our position as the leader of the free world. During our early history the powerful European nations were busy fighting one another, giving us some breathing space to get established, which enabled us to play them off against one another in our foreign policy. Our location, half a world away from European conflicts, insulated us from the madness of nation state competition.

Taking advantage of the preoccupation of the European nations with each other’s ambitions the timing was right to ignore British demands that colonists not cross the Appalachians in 1763; pick up the Louisiana Purchase from a cash-strapped Napoleon; bully Spain and later Mexico into surrendering territory; and grab Alaska from a clueless Russia. Perhaps the greatest piece of good luck was that the continent was rich in natural resources, free for the taking from indigenous peoples too few in numbers to resist.

Yes, Americans have done good things in the world, just not enough that we can ignore the times when we didn’t. We have fought unnecessary wars wasting thousands of American lives and trillions of dollars, not even bothering to count the lives of the not so exceptional others (again the collateral damage) nor to acknowledge the devastation wrought to their cultures.

The war in Vietnam was rationalized by the non-existent “domino theory” based on a non-existent monolithic communism. The hubris of the American military in the Iraq war which predicted being greeted with flowers and parades upon the liberation of Baghdad collapsed when instead they experienced RPGs (rocket-propelled grenades) and IEDs (improvised explosive devices). The false self and its childish need for affection and esteem create a trap for the bloated machismo of the American male.

Ronald Reagan supported the idea that the U.S. was part of a divine plan, a more appropriate theme for a Hollywood movie than a mature nation’s identity. He once quoted Pope Pius XII saying “Into the hands of America God has placed the destinies of an afflicted mankind.”

President Bush in 2004 displaying more “delusions of grandeur” than calm mature leadership said, “We have a calling from beyond the stars to stand for freedom.”  Americans will experience a very special freedom indeed when they escape the bonds of the bogus P-B story which hides the truth that all human beings in the global village are exactly alike. The irony of our history is that by working so hard to deny our selfish pursuit of plenty, pleasure and power, we destroy any chance that we will experience our truly exceptional True self.

We have not chosen the healthiest worldview (story) and as a consequence are stuck with an identity that drives behavior that is self destructive. How should we be behaving? What should we have learned from our past behaviors?

Speaking of the experience of life as a quest, Joseph Campbell describes what our mythology (not history) has revealed to those awake enough to experience it. “The ultimate aim of the quest must be neither release nor ecstasy for oneself, but the wisdom and the power to serve others.”