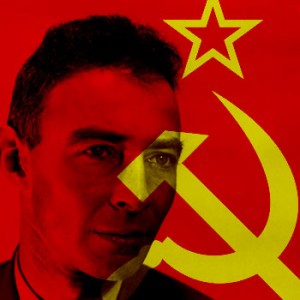 The energy of P-B flows from a wellspring of fear. We turn now to a tragic victim of that fear. Ironically, he was one of America’s most brilliant scientists and as a Jew had reason to be somewhat paranoid himself because our story takes place during the Second World War. Robert Oppenheimer, who led the crash program at Las Alamos to develop the atomic bomb, had the privilege of choosing the program title—Trinity. This choice ironically foreshadowed his own sad fate because it was suggested by a line from a poem by John Donne. “Batter my heart, three-personed God.”

Who was Robert Oppenheimer? “Brilliant and detached, kindly and arrogant, cocksure and tormented, he had long been recognized as a star of the new quantum physics, a man with an acute and elegant mind. During his years as a physics professor at Berkeley and Caltech, he had also signed just about every petition for farm-worker’s rights and attended every fund raiser for the Spanish Republic.”

Nine years after Trinity, Oppenheimer was stripped of his security clearance after an inquiry into his past association with communists. The essential “backstory” here is that Robert denied ever being a member of the Communist Party but Oppenheimer’s brother Frank and even his wife before their marriage had been members of the Communist party.  This inquiry failed to prove that he had been a party member or that he had engaged in espionage. “Its real purpose was … to punish the most prominent critic of the U.S. move from atomic weapons to the much more lethal hydrogen bomb.”

Lewis Strauss, the chairman of the Atomic Energy Commission and an advocate of the hydrogen bomb “set in motion the lethal chain of events that led to the hearing on Oppenheimer’s fitness to hold a security clearance. The FBI put illegal taps on Oppenheimer’s phones and plated bugs at his home and Princeton Office … Oppenheimer’s  lawyers were not allowed to see those transcripts, so they could never prepare an adequate rebuttal. The same evidence would never be permitted in a courtroom, but Strauss had seen to it that Oppenheimer was being disposed of in an administrative hearing for which courtroom niceties did not apply … Until his death in 1967, Oppenheimer would never again feel comfortable as a public advocate for a sane nuclear policy.” Oppenheimer died a shattered man despite JFK’s invitation to the White House and his receiving awards like the Enrico Fermi Prize.

How did this happen to a sensitive, intelligent and compassionate man, a man for whom America should have felt a deep sense of gratitude?  We can understand Oppenheimer and his agonizing encounter with reality best from a P-A perspective. First, review Chapter 2 in Book 3 of the Simple Reality Trilogy to appreciate how a Jew in a Christian nation suffers from unconscious blame for the death of Christ. We know it sounds outlandish but the historical and psychological documentation is too persuasive to ignore. Secondly, as we are experiencing in the post 9-11 paranoia, the government is capable of ignoring the constitutional rights of targeted “suspects” when the level of fear is high enough. Ethical “niceties” do not apply to the other. Paranoia is expressed in self-destructive, psychotic behavior. Oppenheimer was a victim of this psychosis.

In PB, it is possible for any of us to become the other and receive the hostile projections of our unconscious community members.  If we are sufficiently different in some way (e.g. religion, skin color, ethnicity, sexual orientation, etc.) and if there is enough fear in the community, we can all become the victims of an “atomic meltdown.”