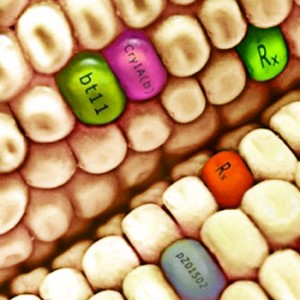 The basic thesis of Simple Reality is that unless humanity can shift to a different paradigm, that is from P-B (the old narrative) to P-A (a new story), we will self-destruct. By sounding an alarm we hope we will give energy to those who are ready to initiate the dialogue that must precede such a shift. The following example illustrates what we mean in a very concrete way. It is but one of hundreds of stories that chronicle the folly of remaining unaware of the nature of reality—of remaining asleep at the helm of the “ship of fools.”

The miraculous “grass” we call corn is a staple of the descendants of the Maya who, after 9000 years of eating it, still sometimes call themselves the “corn people.” If we had more awareness today, we would realize that we are still the “corn people.” And in a broader sense, we need to realize, if we are to avoid catastrophic suffering, that we are completely inter-related and inter-dependent on not just corn but all of creation.

The following story is meant to lead us to a broadening of and ultimately a shift to a more profound human narrative. It is but one of hundreds of such stories emerging in this period of human awakening. Listen closely. The future of your grandchildren depends on what you hear and what you do.

Corn! We eat it. So do cows, pigs, turkeys and chickens. Corn is the source of flour and oil, food coloring, glycerides and the corn syrup used as a soft-drink sweetener. But you knew all of that. Here are a few things you might not have been aware of. “There are some 45,000 items in the average American supermarket, and more than a quarter of them contain corn. At the same time, the food industry has done a good job of persuading us that the 45,000 different items or SKU’s (stock keeping units) represent genuine variety rather than the clever arrangements of molecules extracted from the same plant.”

Now for the “back-story” which is amazing. Hold onto your shirt, this gets a little scary! This grass we call corn which is native to Central America was unknown in the rest of the world until 1492. That’s when the tremendous success story of this plant begins. Success—that is in the context of the world of plants—perhaps not such a success story for homo-sapiens. Aha! The plot thickens.

All animal, vegetable and minerals represent for those of us who are mystics—simply—energy and only energy. The competition among the animal and vegetable “kingdoms” is to capture and store as much energy as possible. The plants grab their energy directly from the sun and animals, including us of course, get our energy indirectly by eating plants or plant eaters.

Now the plot not only gets thicker, it gets darker. More history! Following World War II in 1947, (notice that some of us reading this poignant and eloquent essay were alive by this time so it is now “our story”) the huge munitions plant at Muscle Shoals, Alabama switched from making ammonium nitrate for explosives and used the huge surpluses of this chemical to make chemical fertilizers. You got it. Corn food!

Next, is the introduction of pesticides developed from the leftover chemicals that had been used to make poison gas. One of the “enemies” of corn could now be defeated. We all sense what is going to happen next. The government and the private sector had begun to beat swords into plowshares, so to speak. “As the Indian farmer-activist Vandan Shiva says in her speeches, ‘We’re still eating the leftovers of World War II.’”

In the 1950’s, corn yields exploded. “F1 hybrid corn is the greediest of plants, consuming more fertilizer than any other crop”. Nitrogen is the building block on which all life depends. The amount of life that the earth can support used to depend upon the amount of nitrogen produced by nature. “By 1900, European scientists had recognized that unless a way was found to augment this naturally occurring nitrogen, the growth of the human population would soon grind to a painful halt. The same recognition by Chinese scientists a few decades later is probably what compelled China’s opening to the West: after Nixon’s 1972 trip, the first major order the Chinese government placed was for 13 massive fertilizer factories. Without them, China would have starved.”

Now it’s time to introduce a human actor onto the stage of our drama. Fritz Haber, a German Jewish chemist discovered how to “produce” nitrogen and won the Nobel Prize in 1918 for “improving the standards of agriculture and the well-being of mankind”.  Some call this the most important invention of the 20th century even though you and I probably haven’t heard of Fritz. Vaclav Smil in his book Enriching the Earth: Fritz Haber, Carl Bosch and the Transformation of World Food Production, puts Haber’s discovery in perspective. Not only would millions of Chinese have starved without fertilizers, but “two of every five humans on earth today would not be alive if not for Fritz Haber’s invention [and] billions of people would never have been born.”

We readily see the irony of this revolutionary discovery. A storyteller more imaginative than we are would probably introduce Mephistopheles at this point in our narrative. We say that because we might begin to sense that we have made a kind of Faustian bargain. But we will just stick to the facts which are sad enough both for us and our friend Fritz.

During World War II Fritz Haber’s genius as a chemist enabled the Nazi’s to keep their hopes of victory alive by enabling them to make bombs from synthetic nitrate. “Later, Haber put his genius for chemistry to work developing poison gases. (He subsequently developed Zyklin B, the gas used in Hitler’s concentration camps.) His wife, a chemist sickened by her husband’s contribution to the war effort, used his army pistol to kill herself; Haber died, broken and in flight from Nazi Germany, in a Basel hotel room in 1934.”  Let’s introduce a little metaphysics to lighten things up.

Some of us are aware that we are contained in that wonderful reality that comes with living in the present moment, in a profound paradigm. We know as mystics that a given happening can be paradoxical, a mixed blessing and instructive about the dangers of living in an illusion that affirms “good and evil.” We live in a “transcended” worldview wherein our definition of reality enables us to avoid the traps that ensnare those living in P-B.  Haber’s chemical process was by turns a blessing, then a curse and following the war a blessing and now it’s problematic again. The context of Simple Reality has no such vexing ups and downs.

“Hungry for fossil fuel as hybrid corn is, farmers still feed it far more than it can possibly eat, wasting most of the fertilizer they buy … Some of it evaporates into the air, where it acidifies the rain and contributes to global warming. Some seeps down to the water table, whence it may come out of the tap. The nitrates in water bind to hemoglobin, compromising the blood’s ability to carry oxygen to the brain.” Is our passion for corn on the cob going to lead to short-term memory loss?

Now, less than a century after Fritz Haber’s discovery, half of the world’s nitrogen is man-made. If you are prone to nightmares you probably don’t want to read the remainder of this paragraph. Skip to the concluding two paragraphs for a sip of refreshing hope. “By fertilizing the world, we alter the planet’s composition of species and shrink its biodiversity. The nitrates spread on the corn fields of Iowa flow down the Mississippi into the Gulf of Mexico and have so far contributed to the creation of “a hypoxic,” or dead zone as big as New Jersey.”

Is it too late for the global village ship of sleepwalkers to change course to avoid the nitrogen iceberg? “The key to reducing our dependence on synthetic nitrogen is to build a more diversified agriculture—rotating crops and using animals to recycle nutrients on farms—and give up our vast, nitrogen-guzzling monocultures of corn.” For example, it might not be a good idea to use corn to produce fuel for our gas-gulping automobiles.

A paradigm shift holds out a solution for the very daunting picture that we have created with the help of the excellent research and compelling writing of Michael Pollan. What he and most others fail to realize, however, is that no solutions no matter how well-intentioned will work if contained in P-B. It is the paradigm that is toxic not the details of the story. We are not dependent on synthetic nitrogen. We are dependent on our failure to develop a more profound awareness as to the nature of reality itself.