The Illusion of Physics 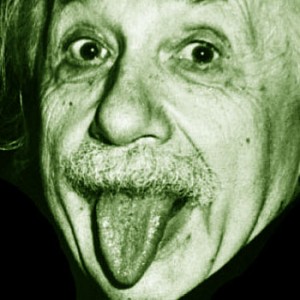 Deborah Solomon (DS): This interview is for our annual Ideas Issue, and because you’re a physicist at Columbia University who specializes in string theory and the secret life of invisible particles, let me start by asking you this: Do you think the field of physics is continuing to provide the world with big, important, Einstein-level ideas? (Remember that Einstein’s truly “big idea” was the question “Is the universe friendly?”)

Brian Greene (BG): Absolutely. Physics grapples with the largest questions the universe presents. Where did the totality of reality come from? Did time have a beginning?

Failing to realize that Einstein was more of a metaphysician than a physicist, we will have to answer Einstein’s question for Mr. Greene. Yes! Yes! Yes! the universe is friendly. We should at this point also define metaphysics. It is the Reality of non-duality emphasizing the subjective (feeling) as the domain of spiritual truth. By the way there is no “spiritual truth” apart from all Truth. Truth is truth—let’s keep it simple for pity’s sake—or for compassion’s sake.

Among the largest questions of the universe is not “where did reality come from? But rather “what is Reality?” Not “did time have a beginning?” but “does time exist at all?” I grant you that physics is the domain of the human intellect which is not capable of grappling with truly large questions but then physicists should realize that they are dealing with relatively unimportant questions in the realm of form which is essentially a mirage.

DS: Wasn’t that (Where and when did reality come from?) already answered by the Big Bang theory? Is that outdated now?

BG: I wouldn’t say it’s outdated. It’s been enhanced into another version called inflationary cosmology, which has a bang that is bigger than the original Big Bang’s. In fact, there may have been many big bangs, one of which created our universe. The other bangs created other universes.

DS: Right. In your forthcoming book, “The Hidden Reality,” you ponder the possibility of a “multiverse” composed of many universes. But what kind of worlds are we talking about? Clumps of subatomic particles in space? Or universes with restaurants and museums?

BG: Some might have museums and restaurants. Some might have copies of you and me having a conversation similar to this one. Yet other universes would be vastly different. They could involve a gigantic expansive space that might be filled with other forms of matter governed by other kinds of physical laws. In one such universe, when the apple is released by a tree, it might go up instead of down.

Our professor has spun off into the world of science fiction forgetting the rules of the “scientific method.” Physicists are supposed to deal with physical laws and physical evidence not “make up stuff.” Could we focus on understanding the universe and the laws that we actually live in before we wander off into outer space which as we have already said is an illusion—a human projection anyway. Hindu seers had that figured out at least 3000 years ago, so let’s follow their lead and take our inquiries in a different, non-form, interior wisdom direction.

DS: All of this speculation seems so devoid of practical application. (No kidding!).

DS: Why not just use your time to try to improve life on earth (Please, please!!!) by coming up with a new source of fuel?

BG: Which is vital, but I think that these ideas are just as vital in a different sense, because it’s these kinds of pursuits that ultimately allow us to understand how we fit into the cosmic scheme.

(We don’t think so but maybe we should give our philosophers and physicists another 3000 years to prove the “practicality” of their ideas.)

DS: You grew up on the Upper West Side of Manhattan, across the street from the Museum of Natural History.

DS: What did your dad do for a living?

BG: He was mainly a composer. To make money he played the bass fiddle at weddings and bar mitzvahs. He co-wrote a song called “Turn Around” with Harry Belafonte. He dropped out of high school to be a performer. He liked to say he was an S. Ph.D.—Seward Park High School Dropout—although he was passionately self-schooled in the big ideas of the universe.

Here we go again with the “big ideas” already. Big ideas, big government, big weapons systems, a big space program, big schmucks with big egos? How about one small idea that has something to do with Reality?

DS: And what about your mom? Does she expect you to win a Nobel Prize soon?

BG: My mother worked on 74th Street for Dr. Stern, the veterinarian, and has since become something of a real estate mogul. She is still not over me not being a doctor. I tell her I am a doctor. And she says, “Well, not that kind of doctor.” With my book “The Elegant Universe” she got as far as the dedication, which is to her and my father. She tried to read on but told me that it gave her a headache.

Or maybe a pain somewhat lower!

BG: No. They define the capacity to answer questions on an SAT test.

DS: How would you define intelligence?

BG: Intelligence is the ability to take in information from the world and to find patterns in that information that allows you to organize your perceptions and understand the external world.

True enough. But physicists and everyone else ought to be concerned not with our ability to understand the “external world,” where we have not yet managed to live in a sustainable way, but rather: what is the nature of Simple Reality, which is the “internal world,” the only “real” world. All of you academics should put that in your “professorial pipes” and smoke it and maybe you wouldn’t resemble the caterpillar in your “Alice in Wonderland” ivory towers so much. Get real dudes!

DS: What is your goal in life?

BG: I would say in one sentence my goal is to at least be a part of the journey to find the unified theory that Einstein himself was really the first to look for. He didn’t find it, but we think we’re hot on the trail.

We’re afraid the heat that you’re sensing on your trail is coming from the hot air that you are all generating. The unified theory is called Oneness. Buddha (he called it Right View) learned that from Hindu cosmology 2,500 years ago and the seers of the Upanishads many centuries before that and they did not discover it by using their intellects. They shut off the “thinking” for a while, stopped identifying with their egos, got quiet and turned within and discovered everything that physicists and philosophers have been looking for ever since.

DS: Why is that so hard? Here’s a unified theory: Everything in the world will get worse.

BG: That may well be true, but our goal is to find theories that make precise numerical predictions that we can test, and that’s a hard theory to test precisely.

Deborah Solomon is right in thinking that things will get worse. But they will get worse precisely because we train more and more physicist chasing “numerical predictions” which have no fundamental reality instead of practical realists who ask practical questions: Where are we? Who are we? Why are we here?

DS: Do you think physicists have been unfairly maligned as eggheads?

BG: Is it maligning to be called an egghead? I strive for it. We’re on this planet for the briefest moments in cosmic terms, and I want to spend that time thinking about what I consider the deepest questions.