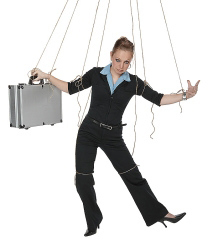 Humanity as a whole is a metaphor for a Punch and Judy show.  To be the humans we think we are we would have to be autonomous (have freedom of choice), logical (capable of rational decisions), perceptive (able to distinguish illusion from reality), and compassionate (able to identify with fellow human beings who are in all respects exactly like us). Our behavior suggests that we seldom exhibit any of these behaviors. Our behaviors are more like the doll-like creature dangling from strings controlled by someone or something else.  I am not suggesting an “analogy” where something is like something else or similar to something else but a “metaphor” where humans are puppets.

To some degree many of us sense that there has to be something more profound, a deeper truth that underlies being human. Many of us don’t show up at the polls to vote because we sense that it is a rigged game with lobbyists, politicians and oligarchs deciding the actual outcomes. Many of us don’t trust banks, insurance agents and mutual fund advisers with our money because we suspect that there is a shell game going on where insiders know where the pea is hidden but we can only guess (the pea is our money but others are eating most of the soup).

We volunteer for foreign wars or support our children who do. Patriotism is, after all, a necessary virtue for citizens of a democracy. Many of us suspect that the demagogues and jingoistic flag-wavers have a hidden agenda where profit and power are the hidden goals. When the caskets and the shattered bodies and minds of our loved ones begin landing at the airport, we notice the government tries to keep the photographers away as the planes are unloaded if they can get away with it.  The message is clear that any criticism of the war at this point would only reveal our disloyalty.

We dutifully attend our churches, synagogues, temples and mosques. Many of us suspect that these hierarchical, male-dominated institutions provide a shield and a refuge for diseased, deluded and self-righteous hypocrites who prey on the fear inherent in a vicious narrative by peddling a judgmental, unconscious and cruel god. Only they can cut a deal with Jehovah to keep the obedient and faithful from eternal suffering.

Lest we be too unbalanced in our characterizations of human behavior we need to be aware that nobody escapes the manipulation of the fiendish and sadistic puppet master.  The perfect justice inherent in the law of cause and effect has included the politicos, lobbyists, corporate CEOs, super-patriots, priests, misers and criminals as puppets too. They think that they have been successful or clever or holier than thou and have escaped the laws of the universe which they will eventually discover overlooks no one. Laugh not at or be disdainful of your easily duped fellow humans, you prideful masters of the universe, you strident prophets, you arrogant, self-righteous pundits—the strings attached to the hands of justice and vengeance are attached to you as well.

The metaphor of human behavior to that of a puppet is irresistible, but if we are the puppets, who is the puppeteer? In the Land of Oz we were surprised and disappointed when behind the curtain there was no omnipotent, omniscient superhuman but only a bumbling, old and befuddled incompetent in control of nothing. The master puppeteer, on the other hand, seems to be a terrifying, powerful and brilliant performer.  But just like the great deceiver behind the curtain in Emerald City, the master puppeteer is a fraud.  Once exposed, we see that the master puppeteer is our own false self.

Confused enough? Let’s sort it out. We all create our own reality; we all pull our own strings. Unfortunately, for most of us we do not realize that we have that degree of control over our own lives. So why do we have the egregious and self-destructive behaviors described above? It is because we have yet in any significant numbers come to understand the underlying structure of human consciousness and how it results in the often ugly and lamentable behaviors most of us experience.

We are born with a natural “string-puller” called the false self but it is only needed until we develop a survival strategy that will get us started in life. Once we have the coping strategy in place and we have provided for our basic physical needs, social relationships and life skills then we can begin to shift to our true self which is our healthy and natural state of being; our wholesome and sustainable identity.

We can then replace the false self with the only master puppeteer that has our best interest at heart and one that works those strings in harmony with the other true-self directed master puppeteers to create a compassionate and joy-filled human community. If we do this collectively or individually we will see that the violence that characterizes the Punch and Judy show (which is anything but funny in real life) begins to fade and we will realize that we do indeed have the authentic power to transform our experience of life. Training as an authentic master puppeteer can begin with studying the principles of Simple Reality.

Find a much more in-depth discussion in books by Roy Charles Henry: Where Am I?  The First Great Question Concerning the Nature of Reality Simple Reality: The Key to Serenity and Survival

1 Response to The Master Puppeteer