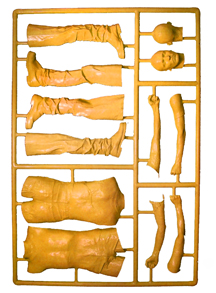 Un-package the three major components labeled Security, Sensation and Power. These will form the framework of the organism and deliver power to the mechanism. Failure to assemble these components as instructed could result in the failure of the H-Sap to function as designed. Set aside the power-pack labeled Fear for later hook-up. Your H-Sap was designed to function in community with other H-Sap units and will only do so effectively if all three components are operating with maximum power. Once the three components are assembled, connect them to the power-pack. Don’t worry, the mechanical memory functions of the security, sensation and power components will start slowly and build gradually over time.

Once the three major components have been interconnected and then connected to the power pack, turn the power switch to “warm-up.” The behavior of the H-Sap will involve beginning to break-in its habituating circuits and engage in mindless and erratic accumulation of material stuff, overindulgence in dissatisfying behaviors relating to food, sex, drugs and sycophantic behaviors. Don’t worry, this is natural because initially the organism is starved for affection and esteem and will settle down into a predictable pattern. H-Sap will make a fairly continuous paranoid-type whining noise but this is perfectly normal and to be expected. Think of this early warm-up stage as a clumsy worm laboriously on its way to becoming a graceful caterpillar. Your H-Sap unit will not reach full operational efficiency until broken in. It will almost seem as if it has a mind of its own.

Only after several years of operation does the H-Sap mechanism reach its maximum efficiency and full potential. Remember, failure to see this extraordinary invention through to its intended, highly functioning capacity is to fail to allow it to fulfill the purpose for which it was designed. When the highly sophisticated instrumentation is properly connected after the “survival and break-in period” and correctly read and interpreted, you will be guided to exactly the correct procedure at exactly the correct time to experience a fully functioning H-Sap. You will be amazed.

When indicated, unplug the H-Sap from its three main components, Security, Sensation and Power and put these in your recycle bin, they will no longer be needed. Plug in the power source labeled Compassion, unplug the old power source, Fear and also recycle this. Notice how your H-Sap unit settles in to an almost inaudible, peaceful hum. It will need no further attention or maintenance. The very first H-Sap unit is still operating with perfect efficiency, happily purring along, so-to-speak. H-Sap Inc. has included a written, money-back guarantee. Not one unit has been returned in all these many years of production but research indicates that many owners have failed to see their units through to their Step Three fully operational stage. We encourage you to not enter that dissatisfied group of users. Take the time to fully understand how your H-Sap works when at peak efficiency. You will not be sorry and your H-Sap will reward you with eons of care-free service.