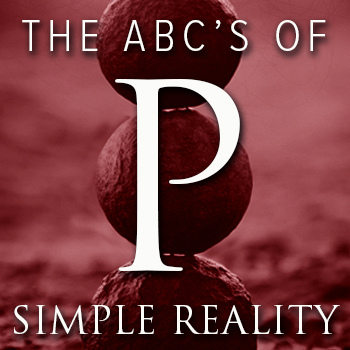 Epiphany, a synonym for peak experience, first appears in the work of Herodotus, Greek historian of the fifth century BCE, and means “the coming to light” or “appearing of gods.”

“Not until Maslow codified the benefits of the peak experience, as well as what he called the Being-values (i.e., values which correspond to the awareness of the transcendent realm), did researchers, educators and the various helping professions begin paying closer attention to the attitudes, behaviors and values of human health.” Notice how close Marsha Sinetar’s descriptors (attitudes, values and behaviors) are to the Simple Reality definition of worldview (beliefs, attitudes and values).

Seth stresses the important realization that peak experiences are perfectly normal but not often sanctioned by our P-B story. “Natural ‘mystical’ experience, unclothed in dogma, is the original religious therapy that is so often distorted in ecclesiastical organizations, but it represents man’s innate recognition of his oneness with the source of his own being, and of his own experience.”

A peak experience can have a powerful transformational effect. The great Russian novelist, Fyodor Dostoyevski, describes the experience of the perfection of Simple Reality. “I feel a perfect harmony in myself and my surroundings, and this sensation is so strong that for a few moments of such bliss I would give ten years of my life, perhaps my whole life.”

The great French philosopher Jean Jacques Rousseau had a peak experience while sitting under a tree. “All at once I felt my spirit illuminated by a thousand lights; a host of living ideas were presented to me with such a force and confusion that I was thrown into a state of indescribable bewilderment. Had I been able to write down one quarter of all I saw and felt under that tree, with what clarity would I have been able to show all the contradictions of the social order, with what force could I have expounded all the injustices of our institutions, and with what simplicity could I have demonstrated that man is naturally good and that it is only as a result of those institutions that people become bad.”

Arjuna Ardagh describes a peak experience calling it a “radical awakening.” “Robert was out on an evening walk. He had been through a series of trials and tribulations over the previous several years, and his mood was blacker than the night. ‘I am finished,’ his mind announced. He still has trouble explaining what happened next. ‘I was overcome by a sense of relief,’ he reports, ‘a sudden feeling of inexpressible freedom. I even began to laugh out loud. My body was filled with happiness, as if I were suddenly getting a joke I’d been missing. For the first time I was feeling really good for no reason at all. I was totally here, in this moment. I could feel the trees around me, and hear the sounds without having to listen to thoughts telling me things needed to be different in some way. Everything was being experienced but the ‘me’ was gone. You taste reality outside the limiting confines of the mind, when you know yourself to be limitless, much bigger than—yet still containing—the body, beyond birth and death, eternally free. It is the moment when you can intuit the real potential of life, free from the incessant machinery of complaint and ambition. Such awakening can leave an imprint on the body and psyche. You are left with a deep knowing of the perfection of things, even when they are going wrong.’”  When we seem to have “hit bottom” in our life’s experience a peak experience is often triggered as a sort of reminder message of our true identity. “Do not despair, you have mistaken your nightmare for reality,” it seems to say.

This happened to Ramakrishna when: “[At] one point in his life he was in such anguish that nothing held meaning for him. On the verge of suicide and in a moment of madness, he ran to fetch a sword. But at that very moment his mind was enlightened.”  In his own words: “It was as if houses, doors, temples and everything else vanished! And what I saw was an infinite shoreless sea of light; a sea that was consciousness.”

Jung explained peak experience in this way, “[He] said that the numinosum ‘was the influence of an invisible presence that causes a peculiar alteration in consciousness.’” Reading in the Abstracts of the Collected Works of C. G. Jung we find a more detailed description: “Psychic experiences as spontaneous expressions of religious or mystical truths make them difficult to explain in purely scientific terms. Nonetheless, it is contended that numinous experiences, whether they are interpreted as merely pathological or as divine inspirations, derive from an overwhelming breakthrough of unconscious material into consciousness. The metaphysical interpretations ascribed to these psychic happenings are seen as consciously elaborated hypotheses; gods, then, are not external forces but images projected by the psychoid realm. The validity of the inner experience of transcendental reality remains, but as a product of man himself.”

Peak experiences also have the power to take us beyond the illusion of the ego or the false self. “‘The experience of the objective fact is all important, because it denotes the presence of something which is not I,’ says Jung, ‘yet is still psychical. Such an experience can reach a climax where it becomes an experience of God.’”

“Jung said that the numinosum ‘was the influence of an invisible presence that causes a peculiar alteration in consciousness.’”

Psychiatrist Eugene Pascal, using “Jungian” terms, enriches our definitions of peak experience. “A new center of psychic command called the “fourfold Self” comes into play, producing a sense of wholeness and well-being. This new center reveals itself to be eminently more adequate and more valid than mere ego-consciousness ever was. More specifically, we experience it as a suprapersonal force that furtively, and lovingly, guides us in creative ways according to some benign secret design known only to itself. As a religious experience the transcendent Self is termed “God” manifesting in us immanently. Divine immanence is an earthly, “feminine” experience, not an airy, transcendent, “masculine” experience. Its patterned coming and manifestation into everyday consciousness is tremendously empowering, though jolting, and quickly passing and transient. Again, we must remember that words utterly fail to describe this phenomenal healing experience.”

Andrew McCarthy spent much of his life seeking solitude while traveling around the world. Perhaps it was the peak experience he had as a boy that excited his quest for his identity while traveling solo for much of his life. Cheryl Strayed describes her impression of McCarthy’s epiphany, that pivotal moment described in his autobiography in her review of his book, The Longest Way Home. “In this moment, McCarthy is no longer a boy “prone to worry and fret,” but rather a wise young man who knows to his very bones what it is to be alive, his entire being flooded with the exquisite perception that we are at once profoundly connected to the wide and cluttered world and utterly, inexorably alone in it.”

Modern monk and mystic Bede Griffiths describes his peak experience. “When I went outside, I found that the world about me no longer oppressed me as it had done. The hard casing of exterior reality seemed to have been broken through, and everything disclosed its inner being. The buses in the streets seemed to have lost their solidity and were glowing with light. I hardly felt the ground as I trod. I was like a bird that has broken the shell of its egg and finds itself in a new world; like a child that has forced its way out of the womb and sees the light of day for the first time.”

Jungian psychoanalyst June Singer explains why peak experiences are not a common topic of conversation. “The secrets of the psyche are closely held by individuals. Often children feel that they see something other people do not see. They also know, somehow, that they are not to tell anyone that they are aware of these secret things. They think: Nobody else speaks about things you cannot see—Perhaps nobody else sees them—Maybe there is something wrong with me that I can see what other people don’t talk about—I guess I am the only one who sees them. If the child is naïve enough, he does speak, and usually gets punished for his trouble. Such a child was William Blake, according to his earliest biographer Alexander Gilchrest (1863), who wrote of him, ‘On Peckham Rye it is, as he will in after years relate, that while quite a child, of eight or ten perhaps, he has his ‘first vision.’ Sauntering along, the boy looks up and sees a tree filled with angels, bright angelic wings bespangling every bough like stars. Returned home he relates the incident, and only through his mother’s intercession escapes a thrashing from his honest father, for telling a lie.”

Marsha Sinetar concludes our article: “The peak experience conditions the personality to death because during it, the individual ‘ego’ (i.e., separate sense, the ‘I’) vanishes. With this vanishing goes the fear of death, since the ego, the I, is what keeps those fears in place, believing as it does that there is a death—that is to say, a no-life condition—to fear. When the personality joins something so much larger, eternal, infinite—even with the disappearance of the separate sense of self—the fear of death goes.” Obviously, peak experiences give us an insight into a truer, more profound reality and could be a valuable resource that our culture dare not continue to ignore.