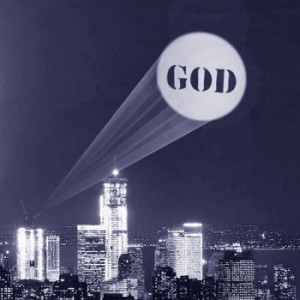 What is divinity if it can come
only in silent shadows and in dreams?
Wallace Stevens in his poem “Sunday Morning.”

To begin this essay, let’s define the context in which God is usually contained, namely religion. Paraphrasing a standard dictionary definition of religion we have: “It is a belief in and reverence for a supernatural power recognized as the creator and governor of the universe.”

Next, we need to get the most controversial question concerning God out of the way. Does God exist? An atheist denies the existence of God. Many of us find that position untenable given the vivid evidence of the miraculous Creation that we are immersed in and for some of us our rich and wonderful interior experience of life. We can however sympathize with the atheists because many of us need something more profound than an anthropomorphic and capricious God. We need a religious narrative that supports our experience of both an imminent and transcendent creative intelligence.

Some philosophers writing on the subject of religion have said that the god human beings are capable of conceiving does not exist. In other words, the concept of “God” is too complex for the human mind to grasp, so in a sense the atheists are correct if they mean that the god we find in religious writings and rituals is a human projection. However, neither science nor psychology has been successful in refuting the existence of a higher power.

For millennia concepts relating to the nature of God have been a rich subject of debate. For example, “The philosophy of the Upanishads corresponds to a psychology that long ago recognized the relativity of the gods. This is not to be confounded with such a stupid error as atheism.”    (1 p. 100)    We are not qualified to argue with the eminent psychologist C.G. Jung, so we best dispense with the arguments of the atheists.

A Hindu does not worship the image as God,
but he worships God through an image.

“God created us in his image says the Bible and we return the favor and create Him in our image” is a tongue-in-cheek explanation of the futility of the human attempt to explain what Hindus decided long ago was impossible for the human intellect. God is a projection of the human imagination that helps create a viable story that addresses human existential anxiety. “That God created mankind, male and female, in his own image is a matter of faith. That our forebears strove for centuries to perfect themselves in the image of their God is a matter of fact. Imitatio Dei, the imitation of God, was a central category in Jewish piety. The imitation of Christ, God made man, was equally central for Christians.”

If we cannot grasp “all of God” is it worthwhile to engage in the search for God at all? Perhaps our focus ought to be on the value of the process of searching rather than on the end result of coming to know God as we know each other. Concepts such as “God created man in his own image” involve God in the process of Self-creation, or to put it another way, God needs a relationship with humankind to realize His/Her own potential for Self-realization. God has evolved over time taking on many different personas, “A destroyer as well as a creator, a war monger as well as a lawgiver, a remote ruler as well as intimate friend, he comes into being by addition or combination, as the precipitate of several divine personalities.”

As we grow in consciousness or shift paradigms we can see how God also changes. The story of Job is one of the most powerful illustrations of how God is changed due to his interaction with a human being. “Without realizing that he does so, Job changes the subject, making God’s righteousness rather than his own the question on the reader’s mind. And ultimately on God’s mind as well, for in the end, Job wins. The Lord bows in a way, to Job’s characterization of God, abandons his wager with the devil, and after a vain attempt to shout Job down, atones for his own wrongdoing by doubling Job’s initial fortune … Job may, therefore, have saved the Lord from himself, yet God can never seem to Job after this episode quite what he seemed before it.”

Therefore, we are able to give a progressively more profound answer to this question Who Am I? as we engage with our own potential for growth and change. Notice in the story of Job how God evolves in consciousness as Job himself becomes more awake. To conceive of God (embodying the process of Creation) as being in a profound relationship with humanity, a mutually-dependent relationship has to be a foundational principle of Simple Reality. Since our essence is an expression of energy, not separate from the rest of Creation, then Creation unfolds in an interdependent, interrelated and interconnected process. We are God and God is us.

Having a personal relationship with God then results in a more compassionate human being and increased compassion is certainly a key indicator of an awakening, hence more “God-like” human beings. “All religion must begin with some anthropomorphism. A deity which is utterly remote from humanity cannot inspire a spiritual quest. As long as this projection does not become an end in itself, it can be useful and beneficial. It has to be said that this imaginative portrayal of God in human terms has inspired social concern. All three of the God-religions [Judaism, Christianity and Islam] have shared the egalitarian and socialist ethic of Amos and Isaiah. The Jews would be the first people in the ancient world to establish a welfare system that was the admiration of their pagan neighbors.”

History has provided a context for understanding how God has evolved over time and helps us to realize that the process is ongoing. Primitive peoples built their religions around a “nature-god.” The human intellect then, over time, elaborated both the human story and the definition and identities of the gods who tended to move from containment in nature to literally above and beyond it.

At the same time early spiritual leaders, mystics and prophets began to realize that their revelations could come from an interior spirit as well as from a source outside of themselves. As early peoples began to identify with a god concerned with their behavior, first within the tribe and then with other tribes as well, they began to have laws concerning human behavior.

The Jews were the first people to attain this conception of God who was very concerned with ethics. “Their long years of exile and the loss of their Temple had weaned them from reliance upon external props and controls. They had thus advanced to a superior type of religious consciousness, which enabled them to approach God freely. They were not dependent upon mediating priests nor cowed by an alien Law. Instead they had learned to find God through their minds and individuality.”

We have now arrived at another foundational principle of Simple Reality. The Implicate Order (source of Creation) is within each of us and therefore accessible to each person without intermediaries. This Self-reliance reveals to each of us our compassionate nature, that we care for justice and how people treat each other. In religious language this is the “personal” or imminent God and, of course, we are THAT.

To understand the God of the mystics, we must enter the narrative of Simple Reality and set aside our intellect, conventional logic and the input of our senses. Our connection to the Implicate Order is experiential, is realized intuitively and is beyond description. “All three of the monotheistic religions developed a mystical tradition, which made their God transcend the personal category and become more similar to the impersonal realities of nirvana and Brahman-Atman. Only a few people are capable of true mysticism, but in all three faiths it was the God experienced by the mystics which eventually became normative among the faithful, until relatively recently.”

If you don’t make yourself equal to God, you can’t perceive God.
Anonymous Christian Heretic of the third century.

As an example of what a mystic might understand from a commonly-known religious fact or concept we can look to the story of Jesus in the Bible. A very early Christian mystic, Origen had an intuitive understanding of the virgin birth. “As a Platonist, Origen was convinced of the kinship between God and the soul: the knowledge of the divine was natural to humanity. It could be “recollected” and awakened by special disciplines.  To adapt his Platonic philosophy to the Semitic scriptures, Origen developed a symbolic method of reading the Bible. Thus the virgin birth of Christ in the womb of Mary was not primarily to be understood as a literal event but as the birth of the divine Wisdom in the soul.”

We can trace the evolution of God from primitive characterizations to more sophisticated and complex formulations. But remember that God began and remains a projection of the human mind and ultimately unknowable. This model is from the book How to Know God by Deepak Chopra.

God Is As We Are

Among the best ways to know God is to know ourselves. And, of course, as our understanding and experience of God deepens, our experience of Simple Reality becomes more vivid. Our time spent in the present moment becomes richer and more meaningful. We will reach a point in Chopra’s Stage Seven when we are living our lives with few reactions and more compassionate responses. At this stage, all sinners are welcomed back into “heaven on earth” and the promise of heaven is fulfilled in this way, one Self-reliant person at a time.

An awakened person has a mutually dependent relationship with the Implicate Order which ultimately culminates in a union which is not an intellectually achieved event. We arrive at a state of consciousness beyond words and concepts, a knowing that we can call “feeling.” “Yet we can use our incapacity to speak about god as a method of achieving union with him, which is nothing less than a “deification” (theosis) of our own nature.”

This process that we are involved in with God is not well understood by the world’s religions as they function today. Shifting to a deeper understanding will require that religions begin to define God as a Being “which empties itself to become imminent and incarnate in the world [and also involves] seeing humanity and Spirit finite and infinite, as two halves of a single truth which are mutually interdependent and involved in the same self-realization.”

When your soul begins
To ever bloom and laugh
And spin in Eternal Ecstasy—
O little by little,
You will turn into God.
Hafiz